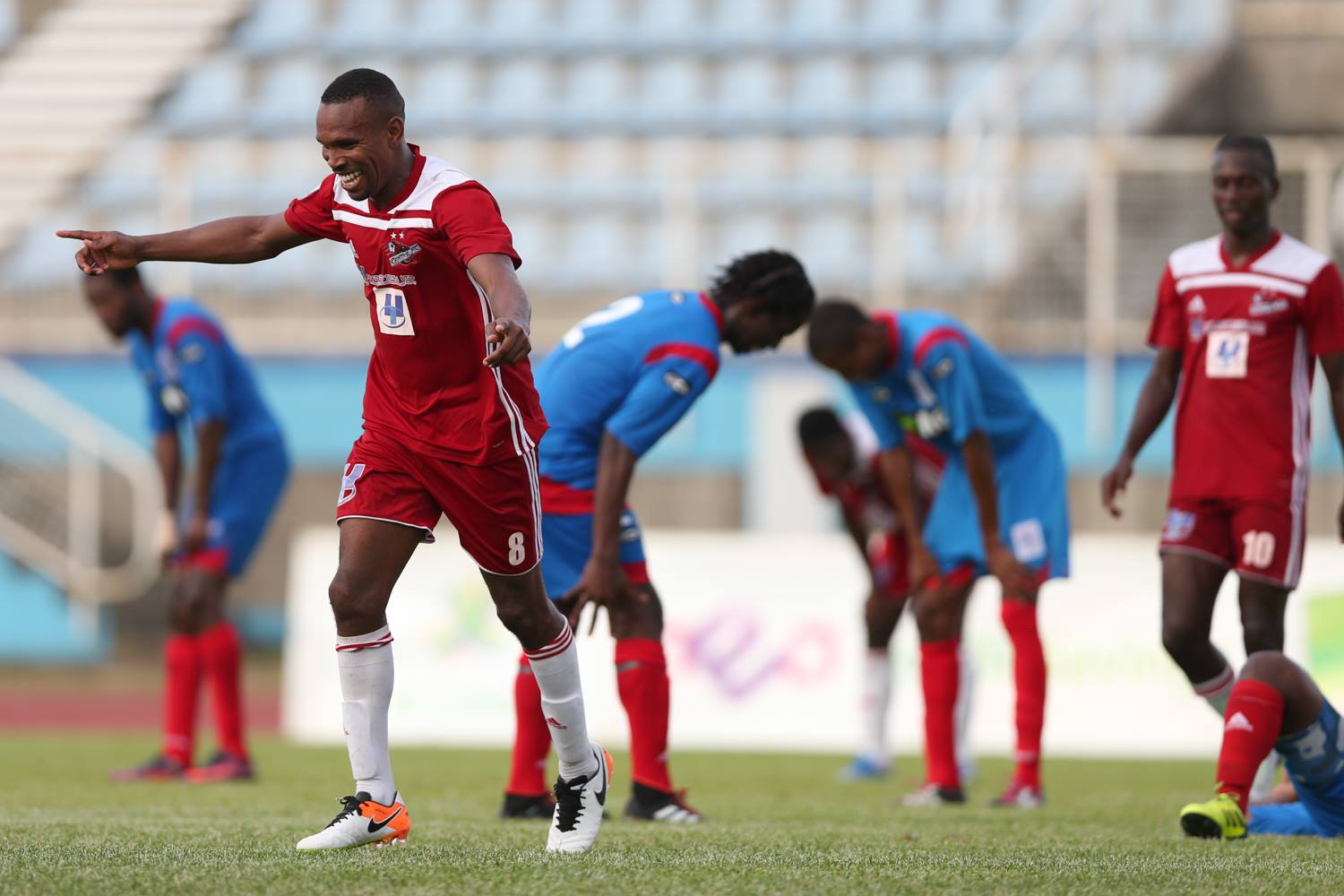 Akim Armstrong netted his second hat-trick in 72 hours to move second-positioned Central FC within four points of Pro League leaders W Connection with a 4-2 win over San Juan Jabloteh in the second of two Round Two Match Day Two matches contested on Friday at the Hasely Crawford Stadium in Port-of-Spain.

The result puts pressure on Couva rivals, Connection. A loss for Connection on Saturday (today) against Club Sando at the Ato Boldon Stadium could restore the Couva Sharks’ hopes of completing a league and Cup double this season after reuniting with the First Citizens Cup last July. However a loss for Angus Eve’s men will re-establish the Savonetta Boys 7-point lead, with seven games left.

Armstrong, fresh off last Tuesday’s 6-1 win over league holders North East Stars in which himself and team captain Densill Theobald each grabbed a hat-trick, scored three times before the break with his third item restoring the Couva Sharks’ lead after Jomoul Overcome Francois and Jamal Creighton had clawed Jabloteh back.

Duane Muckette later put the match out of a topsy-turvy Jabloteh side’s reach with the only goal of the second half to complete the Stern John-coached outfit’s sixth win in the last seven outings.

Armstrong, separated by three attempts from powerful wide attacker Russel Alfred, struck in the 6th and 36th minutes from close range to beat goalkeeper Christopher Biggette following mistakes at the back by Jabloteh to cushion the three-time former league champions 2-0.

Jomoul Francois later halved the Jabloteh deficit, 1-2, in the 41st minute for his seventh league goal of the campaign after sweeping home from close range on a rebound off goalkeeper Marvin Phillip who was troubled by a shot from Creighton.

But Armstrong, the 30-year-old former Morvant Caledonia United and Club Sando attacker, answered back with a superb volley past Biggette with a minute left in the half to restore Central’s lead 3-2 while completing his latest hat-trick and putting his league tally this term at 10 goals – one less than Connection’s Marcus Joseph to heat up the Golden Boot chase. Police striker Kareem Freitas and Jomoul Francois are behind with 8 and 7 league goals, respectively.

Armstrong left coach John baffled seven minutes into the second half when the midfielder-turned-striker opted to square a pass across the area – which failed to meet its intended target – instead of an attempt on goal with Biggette at his mercy in an attack that started from an errant pass from a Jabloteh defender.

Muckette later capped off the 4-2 win in the 71st minute when he guided a Kaydion Gabriel cross past the frozen figure of Biggette following a patient team move by the Couva Sharks involving Theobald, Leston Paul and Alfred. Muckette redeeming himself after drilling an effort inches wide ten minutes earlier off a feed from Alfred subsequent to an unstoppable run down the right by Gabriel.

Morvant Caledonia United, in the opening game of the Mucurapo Road venue double-header, registered this season’s second highest win in all competitions after Defence Force FC’s 10-0 mauling of Terminix St. Ann’s Rangers in Round One of the league on Aug. 15, by raining an 8-0 win over cellar-placed North East Stars.

Guyana international forward Sheldon Holder (24 & 53) and his replacement after 71 minutes 19-year-old Grenada national team striker Saydrel Lewis (76 & 86) each scored twice for the Eastern Stallions on a night that also saw Kerry Daniel (6), Aikim Andrews (28), Renaldo Francois (66) and Sedale Mc Lean (93) all hit the back of the net to snap a four-game winless rot.

Morvant Caledonia with a game in hand against North East Stars, however remains seventh, ahead of, in descending order, Terminix St. Ann’s Rangers (6 points), Point Fortin Civic (5 points) and North East Stars (2 points), but with an improved 11 points after plucking just one point from their previous four games.

Also today, third-positioned Police FC (19 points) with take on Defence Force FC (17 points) from 6pm at the Ato Boldon Stadium before Club Sando and Connection tangle from 8pm at the Couva venue. Elsewhere, Civic will host Rangers from 6pm at the Mahaica Oval.