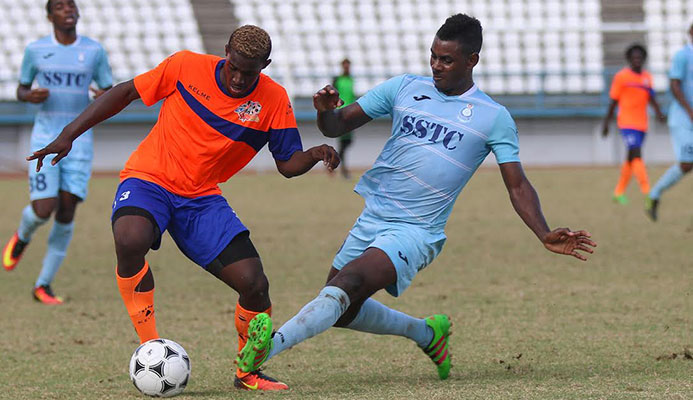 National defender Curtis Gonzales went from villain to hero as his penalty-kick strike four minutes into time added on at the end of the match earned T&T Pro League leaders Defence Force an entertaining 4-4 draw with Tiger Tanks Club Sando at the Hasely Crawford Stadium, Mucurapo on Wednesday night.

Despite the drawn results, Defence Force still leads the 11-club table with 42 points from 17 matches, seven ahead of Terminix La Horquetta Rangers with three matches left for both clubs and will claim the title with a victory in their next match or a slip up by Rangers.

However, on Wednesday, the Army/Coast-Guard combination had only themselves to blame for not coming away with all three points and climbing to within a win of a record 19th national league crown and fourth in the competition 20-year history after squandering a commanding 2-0 lead.

Going into the match at Mucurapo, Defence Force who last won the Pro League in the 2012/2013 season held a nine-point cushion over Terminix La Horquetta Rangers and needed to win two of their remaining four matches to seal the title.

And it took only six minutes for first-year head coach Lloyd Andrews and his charges to take the lead through Dylon King who then doubled the "Teteron Men" advantage in the 32nd minute.

But on the stroke of half-time things started to turn in coach Angus Eve's Club Sando favour when some sloppy defensive play by Gonzales allowed Kevon Williams to steal the ball and beat advancing goalkeeper Andre Marchan, who picked up a thigh injury in the process.

Seven minutes after the restart, Shaqkeem Joseph made amends for a clear missed chances two minutes earlier when he capitalised on a mix-up between defender Jamali Garci and a nervous-looking substitute goalkeeper Sheldon Clarke to make it 2-all by lobbing the ball over the latter from a long clearance in his half.

Keon Moore then had a chance to reclaim the lead for Defence Force in the 55th minute, but his tame effort was easily handled by goalkeeper Kelvin Henry.

Clarke's nightmarish afternoon would continue in goal for Defence Force on the hour mark when he hesitated with the ball at his feet before robbed of possession, only for Club Sando's Michael Basdeo to let him off the hook, by firing his effort overbar.

Keron Cornwall eventually made Clarke and his sloppy defender pay for their casual play after the goalkeeper's weak clearance fell to his feet, and he nonchalantly curled a right-footed effort into the top left-hand corner of the goal for a shock 3-2 lead.

The out-of-sync Moore had another chance to get on the scoresheet and put his team on level terms, but after some neat build-up play at the top of the Club Sando 18-yard box with Brent Sam, his effort was smartly kept out at the near post by Henry.

The game was no an all-out attacking affair with chances coming fast and furious at both ends with both sets of players tiring from the afternoon hot and humid conditions.

And newly recruited Dwight Quintero eventually took one of the many chances for Defence Force to get his team level again at 3-3 by out jumping two Club Sando defenders to nod in a headed at the from a Moore left-sided flighted cross in the 76th minute.

Club Sando may have felt hard done by Quintero's equaliser after wasting a few chances of their own, but Joseph had them celebrating six minutes later when tapped into at the far post, with his league-best 11th goal of the season, for a 4-3 advantage after second-half introduction Trevin Caesar had raced past three opposing players on the left side of the defence and fired a pass across the goal through a crowd of four players.

Joseph's strike seemed a certain match-winner for Club Sando, however, Defence Force managed to eke out a deserved share of the points when Gonzales stepped up and converted a penalty after referee Kwinsi Williams whistled for an infringement four minutes into time added-on.

At La Horquetta Recreation Ground, Phase II, La Horquetta, Rangers had no such troubles as they coasted to a 4-0 trashing of Morvant Caledonia United with Isaiah Lee scoring a first-half brace in the 23rd and 45th minutes before Jamal Creighton (66th) and Kadeem Corbin (86th) added second-half items.