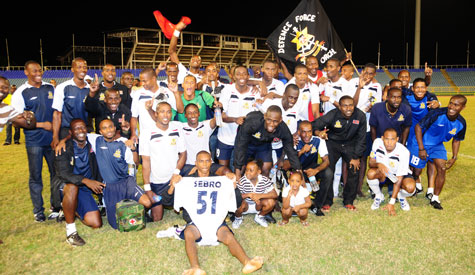 The Soldiers (now 37 points) defeated closest challengers Caledonia AIA 2-0 in the second clash of a Hasely Crawford Stadium double header to extend their lead at the top to six points while the Morvant/Laventille club dropped into third with their 30 points.

Second half goals by Jemel Seabro and Devon Jorsling helped the Ross Russell coached side to overcome a stern Caledonia AIA contest, which saw the Soldiers essentially win this season’s League Championship.

Defending champs bmobile Joe Public now second with 31 points after defeating St. Ann’s Rangers 2-1 at the Marvin Lee Stadium on Tuesday afternoon with a pair of first half goals by Marcus Joseph remains the only team with a chance contesting Defence Force for the title with W Connection suffering a 1-0 defeat against North East Stars at the Ato Boldon Stadium and slipping fourth.

However the chance of pippin Defence Force for the title remains an unrealistic one for the Lions with just two matchdays remaining and a very poor goals difference.

Tuesday’s top of the table clash between Defence Force and Caledonia AIA was truly that of a Final with both sides backed strongly by their supporters and complimented by the Digicel promotional girls at the Port of Spain venue.

Jerwyn Balthazar had the first real effort of the keenly contested match in the 12th minute with a low shot on target however it was thwarted by Caledonia goalkeeper Kevin Graham who carries the same name as the Defence Force number one.

Balthazar then provided a cross in the 25th minute in what should have given the Soldiers the early lead however Ross Russell Jr. showed some nervousness when he spilled wide to the disappointment of many.

Defence Force goalie Kevin Graham later pulled off a decent save to shutout Densill Theobald's low crack on goal after the Caledonia midfielder was played by teammate Kareem Joseph.

It seemed that the night wasn't in Defence Force's favour when rookie Jemel Seabro, starting in first senior team match, spilled high with the goal at his mercy three minutes into the second period after a play between Jorsling and Balthazar broke down with the ball falling lose on the right.

But in the 56th minute Seabro changed the nature of the game putting Defence Force ahead 1-0 tapping in a low Corey Rivers freekick past Caledonia's Jamaican goalie Graham.

Graham was later left to dry in the 77th minute when a through-ball played to Devon Jorsling by Balthazar left his defence beaten and allowing the Defence Force ace-goalscorer to slip an easy shot past him for a 2-0 score.

Following the final whistle Defence Force celebrated the victory but not in the climax of winning the title.

Maybe Defence Force wants to know for certain, so a win or a draw on Friday against San Juan Jabloteh from 8pm at the Hasely Crawford Stadium will definitely erase any doubts. Meantime Caledonia, in third with 30 points, will now look at their chances of the runners-up spot.