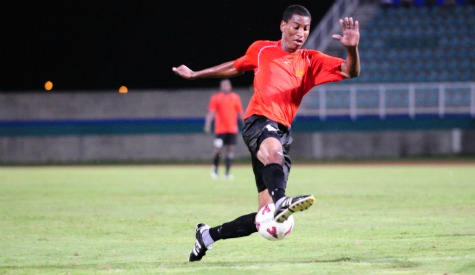 T&TEC were left stunned following the final whistle against Adam’s Construction San Juan Jabloteh in their 2011 First Citizens Cup Group A clash at the Hasely Crawford Stadium on Tuesday night which ended in a 4-4 draw.

T&TEC coming off a 0-0 draw against St. Ann’s Rangers in their first Group A match last Friday, looked set for a victory on Tuesday enjoying a 4-1 advantage just before the hour mark with a first half double by Kurlon Furguson netting in the 12th and 40th minutes and second half strikes by Andrei Pacheco in the 55th and Kevin Modeste in the 59th.

However Jabloteh miraculously pulled back three goals through Hector Sam in the 71st minute, first half goalscorer Willis Plaza completing a double with an item in the 79th minute, his first in the 30th minute and a blast from substitute Luke Gullick in the 89th minute ended the match 4-4.

Jabloteh basically snatched a point from under T&TEC which puts Group A in the boiler with T&TEC leading the way with just two points, while St. Ann’s Rangers with one point and Jabloteh also with one point are to meet on Friday 23 September from 5pm in the final group match to decide the top two finishers which will advance into the First Citizens Cup semi-final round.

However against the run of play, T&TEC took a 1-0 advantage in the 12th minute through Furguson from close up heading past goalkeeper Cleon John after some poor defending by Jabloteh when he was picked out by Andrei Pacheco who made no mistake on a second bite cross from the left.

T&TEC then failed to add to its advantage in the 25th minute denied by brilliance of goalkeeper John who made back to back saves denying a low blast from Modeste and a rebound effort by Furguson.

They paid the price in the 30th minute, when Plaza converted an easy strike from close range to level the scores 1-1 beating goalkeeper Adams on his right after the T&TEC defence failed to shut down a Jabloteh raid on goal.

T&TEC slumped on a couple chances before regaining the advantage five minutes from the break, capitalizing on continued poor defending by Jabloteh when a low ball through the middle found Furguson and he confidently took one touch before placing a low shot beyond a hapless John for a 2-1 score.

Ten minutes into the second period Pacheco made it 3-1 in favour of T&TEC after taking a couple touches on the left then slamming a low shot into the far netting, as goalkeeper John was again left to dry by his defence.

It got worse for Jabloteh a minute later when midfielder Elijah Manners clipped down Akeem Adams inside the area, forcing the match referee to point to the spot, but goalkeeper John who made a few superb saves in the first period proved top class again denying Pacheco from the spot.

However in the 59th minute, yet another time John was left exposed and Modeste made no mistake slotting his effort into the back of the net for a 4-1 T&TEC advantage.

And while everyone seemed ready to throw in the towel for the San Juan based club, team captain Marvin Oliver led the way with a never die attitude and in the 71st minute Hector Sam converted a penalty for a 2-4 deficit after young goalkeeper Akini Adams starting in place of Clayton Ince upended Jabloteh substitute Johan Peltier inside the area.

Plaza then further reduced the deficit 3-4 in the 79th with an easy tap in when Sheldon Bateau opened the play with a cross from the left finding Peltier on the right and his knockdown provided Plaza with the opportunity.

It seemed the late changes made by T&TEC coach Dexter Cyrus replacing wingback Corneal Thomas, striker Furguson and midfielder Modeste with Brenton De Leon, Tigana Sparks and Cebastien Bailey worked against his side, while changes made by his opposite number Earl Carter proved to be masterstrokes.

Following goalkeeper Adams fine save against Hector Sam, the T&TEC goalie was beaten by a brilliant strike from distance by substitute Gullick levelling the scores 4-4 from around 25 yards out, after a patient Jabloteh build-up.

Oliver who picked out Gullick in midfield to open the opportunity, followed up with a brilliant ball to Plaza on the right in extra time, however the striker’s effort was miserably high.

“I will attribute it to self confidence, they didn’t give up,” said Adam’s Construction San Juan Jabloteh head coach Earl Carter following his team’s miraculous 4-4 draw against T&TEC FC at the Hasely Crawford Stadium, in day two of the 2011 First Citizens Cup quarterfinal round on Tuesday night.

Jabloteh sprung back from a 4-1 deficit to level the scores 4-4 in the final thirty minutes in the Group A clash to earn an important point ahead of Friday’s final group match against St. Ann’s Rangers from 5pm at the very same Mucurapo venue.

But as expressions of Jabloteh supporters said nothing more than disappointment, Jabloteh sprung back with second half goals by Hector Sam from the penalty spot in the 71st minute, Plaza getting to his double in the 79th minute and a superb strike from substitute Luke Gullick sealing the 4-4 draw in the 89th minute.

Goalkeeper Cleon John of Jabloteh didn’t go unnoticed with some top draw saves, even cancelling a penalty strike by Pacheco in the second period.

“This is the belief system that I am trying to establish in this team with regards to psychology,” explained a pleased Carter.

“Technical training is important, by psychology is more important because it deals with the mind and if you noticed we went three goals down, mainly because the guys gave up or because a lack of oxygen but then they pulled themselves together.

“I think the change in the game came when it turned 4-2. That goal inspired us more because it came from a buildup and the players recognized that if they can keep the ball that long and put it in the back of the net, they can do more. We then saw the change in atmosphere of the game.”

Carter applauded the performance of goalkeeper John, even questioning Trinidad and Tobago national team selectors for not having his number one in red, white and black colours.

“It’s magnificent to see that he (Cleon John) inspired the team so much,” continued Carter, a former T&T international. “He was a contributing factor when we made the scores 4-2. He was making some tremendous saves.

“If he isn’t national material, I want people to show me national material. If he isn’t the number one goalkeeper in the country right now, and I’m putting my head on a block for that, tell me who,” questioned the Jabloteh coach. “It all has to do with his belief system. He believes in himself. He wants to try and become the best even the way he trains.”

John also questioned his absence with the T&T national team saying, “I believe I’m supposed to be there, after years of top performances. However the national coaches are watching elsewhere. Local based players like myself need a better chance.

Commenting on his team’s 4-4 draw and the penalty save, John explained, “We started off good in the first 15 minutes but became very complacent after a while and allowed soft goals. But we dug deep in the end to come away 4-4.

“I had to hold my end, because the less goals scored against us, it’s better for my team to stay in the game. And it turned out well coming out with a 4-4 draw.

“For the past few years I’ve observed players in the League on how they kick penalties and when I saw it was Andrei Pacheco, I know a lot of left footed players like to go on the goalkeeper’s left, so I went with strong hands and made the save.”

Coach Carter also gave special credit to double goalscorer Plaza adding, “A lot of negatives were casted about him when I first came to the club by some spectators, but in the first week of seeing the guy, I recognized talent and we have seen it tonight(Tuesday).”

Cater had a lot of positives out of the game, but a major negative prior to match time.

Carter said that a few players were left out of his starting lineup for arriving minutes late of the requested arrival time.

“As a coach what I try to do is establish a professional approach. So when we say eight o’clock its eight o’clock and not 8:15. It’s something we have to change. I know it disrupted my team but for the sake of betterment going forward, I had to make that decision.

If it means that it’s going to disrupt the team to establish a point then it has to be done, because there is no point in rewarding players when they do wrong, because things will never change. I think this sent a message to all my players,” ended Carter.