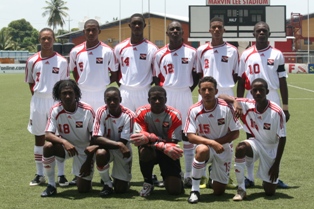 A Trinidad and Tobago Under 15 Boys team will depart tomorrow (Thursday) for Cali, Colombia to participate at the Tournament of the Americas.

The team, under head coach Shawn Cooper, has been in training for the past five months and includes several of the country’s young talent. This same squad was supposed to have participated at the CONCACAF U-15 Tournament in August in the Cayman Islands but did not travel.

As such the TTFA made every effort through assistance from the Ministry of Sport and Sportt Company to have the group make the trip to Cali for this tournament which will see T&T make a third appearance.

Former T&T head coach, Colombian Francisco Maturana was again instrumental in T&T being among the invited teams from outside of South America.

“We thought it was appropriate to ensure that we did not miss out on an opportunity like this where our young footballers will have the chance to test their ability against some of the bright talent from South and Central America,” TTFA President Raymond Tim Kee told TTFA Media.

“We needed to ensure that the team got some kind of match practice after missing out on the Concacaf championship earlier this year and we are pleased that they are now able to go off to Colombia which for all of them will be their maiden experience in an international tournament,” Tim Kee added.

Coach Cooper, who will be assisted by former national player Leonson Lewis, is hoping to make the best of the opportunity handed to the team which is preparing for the 2015 Under 17 Men’s World Cup qualification.

“We’ve been to this tournament before and it really presents us with an excellent  opportunity to test our skills and to compete against some really good teams from Central and South America. It’s an ideal situation for our young players to get the kind of exposure necessary for preparing for them for future World Cup qualifiers at the youth level,” Cooper said.

The Mexico National Under 17 Team is also participating in the tournament. T&T will meet Norte del Valle of Sevilla in their opening game on Friday evening. Twenty seven teams are in T&T’s category which includes Under 17 and Under 16 teams.