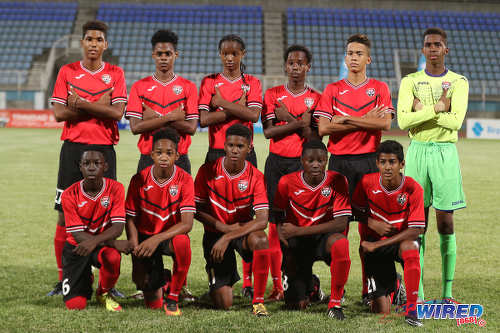 Trinidad and Tobago’s Under 15 Boys team went under 4-0 to Costa Rica in their opening Group B encounter at the CONCACAF Under 15 Championship played at IMG Academy in Bradenton, Florida on Sunday morning.

T&T conceded goals in the 14th  from Manfred Ugalde, 40th, captain Jose Tello with a powerful shot from a corner which gave goalkeeper Jaheim Wickham no chance,  Giancarlo Castro in the 44th  and Dereck Valentine in the 59th of 70-minute match.

The United States defeated Canada 1-0 in the other Group B encounter played on the day.

T&T had the first real chance of the game but Jean-Heim Mc Fee failed to make good of his opportunity in the opening minute of the game. The game was played in sweltering conditions and there was hydration breaks during both halves.

T&T are one of the eight seeded teams in Division One which comprises of  Groups A and B along with Mexico, Jamaica, Honduras, Panama, United States, Costa Rica and Canada.

Trinidad and Tobago got off to a miserable start at the 2017 CONCACAF Under-15 Championship at IMG’s Bradenton campus in Florida, losing 4-0 in their Group B opener against Costa Rica on Sunday morning.

Manfred Ugalde (14th minute), captain Jose Tello (40 minute), Giancarlo Castro (44th minute) and Dereck Valentin (59th minute penalty) left Trinidad and Tobago without shade under sweltering conditions in the 70-minute encounter which kicked off at 9am and had hydration breaks during both halves.

Hosts United States defeated Canada 1-0 in the other Group B match played on the day.

T&T will face Canada 9am Monday (14 August) before closing group play against the United States on Wednesday (16 August).

“Now we need to win the two games to get through to the knockout stages, but we are going to go for it,” T&T U15 head coach Russell Latapy told the TTFA media. “I was fairly happy with some of the things I saw. We are a much better team than we were earlier in the year but we still need the experience of playing international games [and the CONCACAF U15 Championship] is part of the process.”

Latapy conceded that the better team won on Sunday, saying, “I thought the better team eventually won the game. We had a couple opportunities especially one in the first minute which we should have probably scored and the game would have been a different one if we were playing from the front.”

Latapy’s reference was on a missed chance by Jean-Heim Mc Fee.

“The difference in the both teams wasn’t quality but instead tactical awareness. You can tell the Costa Rican players were playing at a high level and they were able to manage the game better at different stages. We are a team that is getting to that point which is where matches like these will serve us well going forward.

“In terms of technical ability, we were right there on par. If you looked at the game, you wouldn’t think it was a 4-0 score line. But a lack of playing at that level affected us. When were down 2-0 we were then made to chase the game and were making changes. That is where you really saw the difference. They were able to make the pitch a bit bigger and give us the run around.

“Most importantly for the players is that it’s a great experience and a fantastic learning curve. I am hoping that our players can see the difference between the two teams is that they (Costa Rica) were a bit better tactically and playing their positions better whereby we were still getting into a bit more individual play and holding the ball in the wrong positions.”