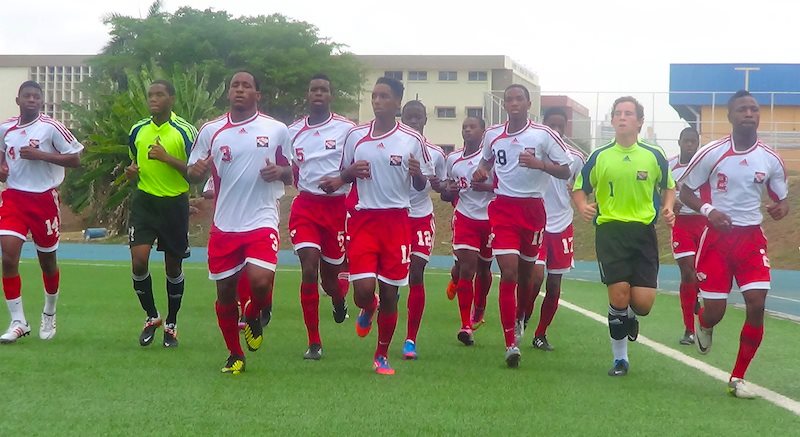 Trinidad and Tobago’s Under 17 footballers will try to repeat the feat accomplished by ex-national captain Leston Paul and his teammates in 2007 when they face off with Panama from 6pm on Saturday knowing that a win will see them qualify for the 2013 FIFA Under 17 World Cup in the United Arab Emirates.

In 2007, with current Technical Director Anton Corneal at the helm, T&T defeated Jamaica 1-0 on a first half winner by Kevin Molino at the National Stadium in Kingston to advance to the Under 17 World Cup in South Korea.

From 6pm on Saturday, current head coach Shawn Cooper will attempt to lead his team to a significant win once again against the host nation at the Estadio Agustín Muquita Sánchez in La Chorrera.

T&T were not permitted use of a training facility for a requested time of 8am on Friday which meant that a late evening session was scheduled in what has been relatively dry conditions since the tournament kicked off last Saturday.

But Brendon Creed and his teammates remained focused on the task ahead and do not intend to let any distractions get in their way.

“We are going to the game in a positive frame of mind. We have faith in God and faith in our ability and right now we are just focusing on the task at hand,” Creed told TTFF Media on Friday at the Intercontinental Playa Bonita Resort where Panama, Canada and Jamaica are also based.

“This is the biggest game of our lives as young players. We will shed some light on what some say is a dark situation in Trinidad and Tobago football at the moment by qualifying. A win will open up the doors to a lot of opportunities and it can change our lives,” Creed said.

The work rate of right wingback Shannon Gomez has been commendable and the midfield duo of Creed and Andre Fortune will have to step up once again while attacking winger Levi Garcia could also pose a threat to the Panamanians.

Former under 20 forward Akeem Garcia is yet to deliver in this tournament and will be hoping to pull out all the stops in this decisive outing. Brent Sam, scorer of T&T’s second goal in the 2-0 win over Costa Rica will also be gunning for the opposition.

Defender Maurice Ford is out on two yellow cards but the rest of the backline in Josiah Trimmingham, Leland Archer and Gomez will be all too ready for the occasion ably supported by Houston Dynamo academy goalkeeper Johan Welch.

“We were elated about getting past the first round and into the quarter finals.. It might be one game away from a World Cup but the saying goes…so close but still so far... It’s not going to be an easy task but we are prepared to go all the way at this time,” Cooper added.

Cooper, current head coach of Presentation College, San Fernando and an employee of Royal Bank of Canada, is cautiously optimistic of a winning result.

“We will be in their faces from the opening whistle and try to make sure we take our chances when they come. We’ve done pretty well to get here through the help of the Federation and the Ministry of Sport and now we have to complete the mission,” the head coach stated.

In Saturday’s other quarter final match up from 6pm, Jamaica will face Canada and on Sunday the United States takes on Honduras and Mexico meets Guatemala in the remaining quarter final matches. Four teams from CONCACAF will appear at the 2013 FIFA Under 17 World Cup which kicks off in October.

T&T Head coach and TD look ahead to Panama clash