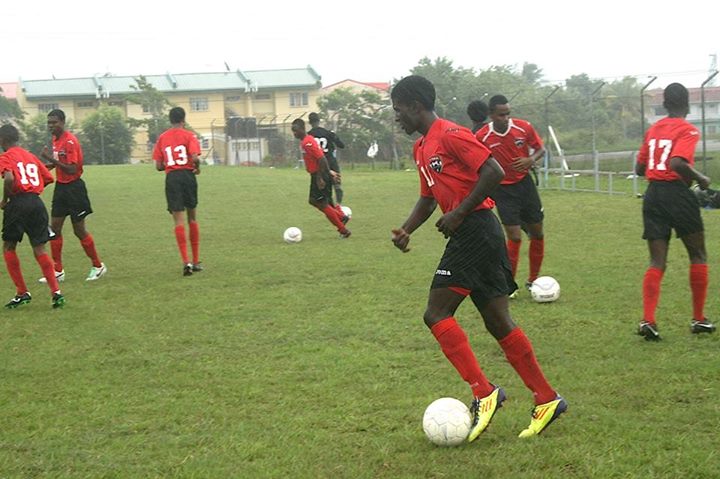 The Trinidad and Tobago Football Association’s National Youth Programme came under fire again today after National Under-17 staff members yesterday urged players sign forms to represent Morvant Caledonia United in the Under-18 Division of the Youth Pro League (YPL). The signing generally took place without the teenagers having the benefit of adult counsel or the chance to consult with their parents and clubs.

On Tuesday, Trinidad and Tobago National Under-17 Manager Aaron Pollard and Assistant Coach Duane Richardson visited several schools and presented the players with YPL registration and transfer documents and instructed them that they had to sign to play for the Pro League club.

Neither team coach Russell Latapy nor Technical Director Anton Corneal could be reached for a comment but one Pro League club coach confirmed the sequence of events to Wired868 and expressed great surprise at the way things had gone.

“I was contacted [yesterday] by one of my players,” the coach said, “who said that an assistant coach from the Under-17 National Team came up to Naparima College and came up to him with registration information and a transfer request.

“He told him he had to fill that stuff out, one time (for Morvant Caledonia United).”

The coach conceded that the officials did have some authority to make decisions because clubs are lower down on the totem pole than national teams. He objected, however, to the manner in which the whole operation has so far been carried out.

“National Team takes precedence as far as I’m concerned,” he said, “but to transfer him out and into another club, that is very odd to me.”

On Tuesday as well, Pollard sent a text message to players and to some parents indicating that, owing to the national team’s need for match practice combined with the unavailability of the funds required to arrange games against foreign teams, a decision has been taken to register the team to compete in the TTYPL as “Caledonia Utd.”

“The U17 Football Team will be playing under Caledonia Utd in the T&T Youth Pro League U-18 tournament,” Pollard’s text reads. “We are doing this because we need to play more matches as a team and to find better quality matches since we are not able to secure international matches at this time. The deadline to register is tomorrow so I will be calling you later today to make arrangements to get the registration and transfer form signed.

Contacted by Wired868, Pollard declined to confirm whether the Under-17 will be competing as Morvant Caledonia United and claimed that a request has been made for Latapy’s charges to play in the League as the National Under-17 Team.

Pollard also declined to confirm whether Richardson or himself had visited any of the players yesterday and refused to reveal the identity of the mastermind of this new initiative.

However, coaches, clubs, parents—many of whom are still to be formally contacted about the proposed move—are particularly pleased with what has so far transpired.

One school head coach, speaking to Wired868 on condition of anonymity, claimed that the negative reactions have been generated by the failure to follow proper procedure and respect the communication chain.

“Nobody from the National Team reached out to me,” he said, “which is disappointing. Things would be so much better if everybody would just communicate and (let us) work hand-in-hand.”

“There is no higher honour than playing for your country,” he insisted, “and I would never stop the boys from playing for their country. But at the same time, some level of respect has to be coming back to the schools.”

He expressed concern about the possibility of victimisation if the players and parents refuse to sign the registration and transfer forms.

“What are the ramifications if the parents decide that they’re not signing their boys over to Caledonia?” he asked. “Is it that they going to be victimised and banned from the national team going forward? We have such a big pool of players that we could afford to ban players?”

Another Pro League club owner was not pleased at the way things had been handled either.

“These people didn’t even call me or the parents,” he complained to Wired868. “One parent called me and was very, very upset with the whole situation.”

“She said that her son was very upset that they went to his school and forced him to sign. ‘They kinda bully the boys and pressure them to do something that they didn’t want to do,’ she told me.”

He too agreed that the national teams take precedence over the clubs but he could not understand some of the decisions that have been made.

“Why play under Caledonia?” he asked. “Why you chose Caledonia? You asking boys to leave the clubs that they born and grow in to go to a next club and play?

“If it was an Under-17 team playing as the National Team, now that is a difference. But you playing under Caledonia so you going to represent Caledonia?”

National youth teams have previously participated in national competitions but always as national teams and never as a club.  And, despite the unambiguous statement in Pollard’s text, Morvant Caledonia United owner Jamaal Shabazz was adamant that no such thing is going to happen this time either.

“Them competing as ‘Cale’ is out of the question!” he exclaimed to Wired868.

According to the seasoned Pro League coach, who also serves as TTFA National Youth Football Coordinator and National Women’s team head coach, Morvant Caledonia United was requested to relinquish their spot in the Under-18 Division of the TTYPL to allow for the National U-17 to take their place.

The YPL is currently two rounds into its season and Morvant Caledonia United have already forfeited their first two games in the Under-16 and Under-18 divisions.

TT Pro League General Secretary Julia Baptiste explained that, according to the rules of the competition, the initial deadline for registration in the League was 2pm on 8 February.

However, there is a second registration window, which was opened on 26 February and which will remain open until close to the end of the competition. Therefore, any team that did not properly complete its registration by that preliminary deadline can now still register teams after two rounds.

To be eligible to compete in the round on the Sunday, any as yet unregistered team wishing to play must however file its registration documentation by noon on the Friday immediately preceding.

Under this rule, clubs such as North East Stars and Central FC, which previously forfeited points in various divisions, can now suit up for action.

Baptiste denied any knowledge of any registration request to have the Under-17 team compete in the YPL but, according to Shabazz, the proposal is on the agenda for the Pro League meeting this Friday.

Editor’s note: As the story was about to be published, Wired868 was learned that, in the wake of the negative reaction and persistent inquiries from Wired868, TTFA officialdom has softened their position and are no longer requiring players to sign the relevant forms.