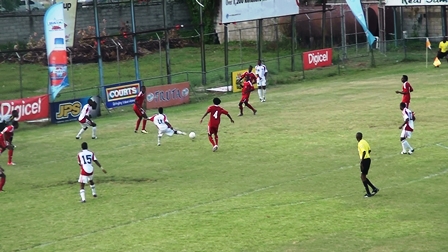 Trinidad and Tobago has once again found itself in a final-day must win situation after this country’s Men’s Under 20 footballers suffered a 2-0 loss to Haiti in their Group A CFU World Cup qualifying encounter at the Waterhouse Mini-Stadium, Kingston on Wednesday evening.

A win would have pushed T&T through to next year’s CONCACAF Final round in Mexico but they must instead now defeat Curacao in Friday’s closing match to make sure. This became the scenario after Puerto Rico defeated Curacao 2-1 on Wednesday to  move level with T&T on three points  and stay alive in the race for one of the two spots.

Earlier this year, the T&T Under 23s needed a last game win over Suriname to advance to the final stage after losing to St Kitts/Nevis in their second outing and in the previous round, this same Under 20 outfit needed to overcome St Vincent/Grenadines after losing to Suriname following their first match win over Guyana.

T&T  found the going tough in Wednesday’s match-up and paid the price for a lackluster showing, particularly in the opening half which saw Haiti take a 31st minute lead through Luckner Horat who rifled a right footer past an outstretched Quesi Weston in goal.

Missing from the starting team was Adan Noel, the provider for the opening goal in Monday’s win over Puerto Rico. He was sidelined with a hamstring injury and 16-year-old Akeem Garcia was not once allowed the luxury of time and room to make any penetrative runs into or around the penalty box against a well organized and vigilant Haitian defence.

Coached by Cuban Manuel Rodriguez, they controlled much of the first half play, enjoying better possession and seemed more intent on seizing the initiative. But it was actually T&T who created the early chances.

Defender Alvin Jones had a header  miss the near right post  in the 4th minute and hardworking midfielder Xavier Rajpaul had T&T’s best opportunity but shot over bar moments later from the inside the six yard box after Garcia found him from the right. Forward Shackiel Henry, who netted against Puerto Rico, could only direct his effort wide of the left far post after collecting from Garcia in the 22nd minute.

Haiti found their stride midway through the half and were unfortunate not to go ahead when France-based professional James Jean Francois had his low shot saved by Weston after Dumy Fede’s initial attempt was blocked.

Then on the half hour mark, Francois’ header came off the upright  and was scrambled away to safety.  Jean Francois is attached to French club Le Mans FC and was a force for his team for much of the ninety minutes.

And what Francois couldn’t finish, Horat didn’t hesitate to show how it was done as he collected on top the area and let fly with his right foot. All Weston could do was retrieve the ball for the restart from the centre.

T&T's players bowed their heads for the remainder of the half and head coach Ross Russell would have hoped his fiery half time talk would have spurred on skipper Duane Muckette and his men. But that was not to be.

Two minutes into the second half, Samuel Pompe stepped up to convert a penalty to send Haiti 2-0 ahead after defender Anthony Charles was called by Guyanese referee Sherwin Johnson for committing a foul.

Both replacements  gave better efforts but to no avail. Muckette, who struggled to find his footing in the first half, got more involved as the game progressed but the Haitians maintained their poise and never buckled even as T&T pressed for a first goal.

Gomez had one try at goal in the 76th and Muckette, with a clear sight of the goal, fired over bar in the 84th minute of play.

It’s now all to play for on Friday as Muckette and his men try to keep their 2013 Turkey World Cup dreams alive.

“That’s football sometimes. It didn’t go according to plan for us. Haiti had more fight in them and they deserved the win,” Russell told TTFF Media.

“Our midfield needs to adjust because they didn’t show up today. There are some things to talk through and tidy up going into Friday’s game. We need to improve our finishing. Our guys need to be a bit more calm but also have that killer instinct in front of goal. I think they still have a lot of the College league syndrome in them.

“We need more urgency in our play and a longer period with these players to drill certain things into them. Once we go through to the next phase which I think we will do, we need to continue our preparations and address a lot of things as soon as we get back home.”