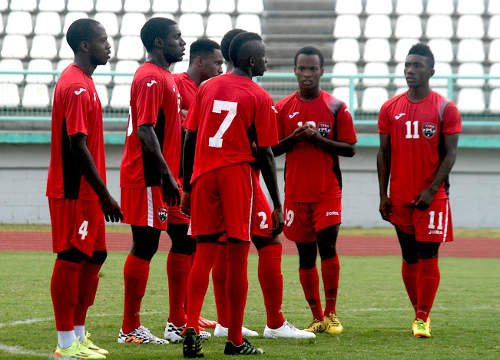 Trinidad and Tobago national men's under 20 team are virtually through to the CONCACAF Cup stage after it's emphatic 4-0 win over Curacao yesterday evening at the Hasley Crawford Stadium.

The young Warriors currently sits on the top of the table with six points from their opening two matches, and only need a draw against Cuba on Tuesday night to top the group and play in next Friday’s Caribbean Cup final.

Jabari Mitchell got his second goal of the tournament when he netted a 33rd minute item. Much talked about starlet Kadeem Corbin then triple the lead for T&T with a penalty in the 44th minute and a 60th minute goal before Aikim Andrews sealed it for T&T in the 83rd minute.

The top two nations from each group will progress to next January’s Under-20 CONCACAF Championship in Montego Bay, Jamaica.

After an anaemic opening result against Suriname, the Trinidad and Tobago national under-20 team found Curaçao to be more to its liking as the young “Soca Warriors” romped to a 4-0 win that virtually assured their progress to the CONCACAF stage.

The Warriors have six points from their opening two matches, after Friday’s 2-1 win over Suriname, and only need a draw against Cuba on Tuesday night to top the group and play in next Friday’s Caribbean Cup final.

Earlier this evening, the Suriname teenagers stunned Cuba 1-0 thanks to a clever finish by Orveo Faerber; and gave themselves a real chance of advancing to the CONCACAF stage.  The top two nations from each group will progress to next January’s Under-20 CONCACAF Championship in Montego Bay, Jamaica.

Should Suriname defeat Curaçao on Tuesday, as is the likely outcome, it would take a lopsided win for Cuba against Trinidad and Tobago to deny the host nation. And Cuba coach Willian Bennett might have had a sinking feeling tonight as he watched the Warriors devour the naïve Curaçaons.

The sweeping modifications did little to help fluency initially. But the lift in tempo was unmistakeable.

“We moved the ball around well and our discipline was much better,” said King, in the post-game press conference. “It was a much better performance.”

Curaçao simply could not operate on the same frequency as the young Warriors and, once Mitchell opened the score summary, there was always the likelihood of an embarrassment.

Trinidad and Tobago attacked quickly and incessantly down either flank while the duo of striker Kadeem Corbin and offensive midfielder Jabari Mitchell revelled in the space afforded them between Curaçao’s defence and midfield lines.

It was a surprise that the small but appreciative crowd had to wait for as long as 33 minutes to celebrate the first goal.

Corbin, who did not score in Friday’s win, seemed determined to open his account tonight and snatched at two opportunities early on when teammates were better placed. In the 33rd minute, he compensated with a squared pass to Mitchell that might have been a tad early.

Like against Suriname, Mitchell finished with conviction and accuracy as he blasted to the right of the splendidly named Curaçao custodian Zeus De La Paz.

There was a rare scare for the host team, three minutes later, as a cross from opposing flanker Lliandro Martis took a deflection and rebounded off the heel of Trinidad and Tobago’s upright.

But Corbin doubled the Warriors’ advantage from the penalty spot in the 44th minute after a trip on Levi Garcia and the match was effectively over as a contest after that.

“In the last game, my coach said I have to score,” said Corbin, “so I went out and executed.”

Garcia ought to have teed up Mitchell for Trinidad and Tobago’s third item in the 56th minute but went for glory and was denied by De La Paz. But it was a temporary inconvenience as Corbin got his second on the hour mark after overlapping captain Shannon Gomez provoked havoc in the opposing area.

King turned to his substitutes at that point as Kion Joseph and Matthew Woo Ling made their first appearances of the tournament. And Woo Ling engineered the final item with an accurate free kick into the area that Andrews headed home at the near post.

After the match, King congratulated his players on qualifying for the Under-20 CONCACAF Championship—although it is not yet a mathematical certainty—and the squad linked hands to salute the crowd at the final whistle.

But the head coach and his team captain insisted their mission is not done yet.

“As a team we set ourselves a first place goal,” said Gomez. “We want to play in the (Caribbean Cup) final to market Trinidad and Tobago’s football. We just want to go out there and (win) proper support for the team.

“Our long term goal is to go to CONCACAF and then make the (2015) World Cup in New Zealand.”

The squad is still in its infancy and King would hope that they receive the necessary support to build on their start. There was certainly something to get excited about tonight.

“This is the feeder team to the senior team,” said King. “(Team preparation) is a collective effort. (National senior team head coach) Stephen Hart and (former national youth team coach) Muhummad Isa have been helping too.

“It is not my team, it is Trinidad and Tobago’s team.”

Cuba is next from 7.15 pm on Tuesday. And a place in Friday’s Caribbean Cup final beckons.

Curacao head coach Henry Caldera described Trinidad and Tobago as the best team in the tournament after the hosts came away comfortable 4-0 winners in their second match of the Caribbean Under 20 Championship at the Hasely Crawford Stadium on Sunday night.

Caldera was speaking during the post-match press conference when he said he had hoped to see a closer contest but his team turned out to be no match for T&T.

Curacao put T&T out of the 2013 Under 20 World Cup qualification with a 1-0 win in Kingston, Jamaica but this time found the going much tougher against the Derek King- coached outfit which got goals from Kadeem Corbin ( 44’ and 60’) Jabari Mitchell (33’) and Aikim Andrews (83’).

“Last time we won our game against Trinidad and we put them out but this time it was much different. You can see the big difference in the team two years later,” Caldera said.

“Today they were very, very good and I think they are the best team in the tournament. I have seen all the other teams and okay yes, there is Haiti which is also good and Cuba but Trinidad I see has best team now and you can see it with the way they played today against us,” Caldera said.

Missing from the T&T squad on Sunday was Kevon Goddard who was ruled out after contracting Dengue but Levi Garcia made his return to the starting team after missing the opening match.

King was thrilled with his team’s showing.

“It was a wonderful performance by the team tonight,” he said.

“The guys played with a lot of determination and they did a lot of things right. We are very pleased to have made it through to the CONCACAF stage and hopefully we can continue to build and get better from here,” King said.

“We want to keep marketing Trinidad and Tobago football so every victory is a plus for the team.  We wanted to go out there and take care of business. Every match is important for us so I don’t think we will just go into the Cuba team and take it lightly. We want to reach the final and win this tournament,” he said.

T&T faces Cuba from 7:15pm on Tuesday at the Hasely Crawford Stadium with Suriname and Curacao battling for a possible spot in the CONCACAF Finals from 5pm.

KADEEM CORBIN, the teenaged St Ann’s Rangers striker, netted a brace as Trinidad and Tobago won for the second time at the 2014 Caribbean Football Union (CFU) Under-20 Championship, when beating Curacao 4-0 on Sunday night at Hasely Crawford Stadium (HCS).

Almost assured of reaching Friday’s final, after taking a maximum six pointS from two Group A matches, the Young Warriors need a point against Cuba tonight to make sure. With Group A still tightly-knit, all four teams, including pointless Curacao, can still reach the semi-final stage.

The top two teams from each group that has played at the Hasely Crawford and Ato Boldon stadiums, advance to the CONCACAF tournament, where the top three finishers there, go onto the 2015 FIFA U-20 World Cup to be played in New Zealand. The two Caribbean group winners met in the final, while the runners-up battle for third, both matches to be played at HCS on Friday.

W Connection FC central midfielder Jabari Mitchell opened the scoring for T&T in the 34th minute with his second goal of the tournament, before Corbin converted a 43rd minute penalty to see the Warriors comfortable leading 2-0 at the half. Corbin got on the sheet again in the 61st with a first time right-footer from just inside the penalty area, before former St Augustine Secondary left-winger Aikim Andrews, capped it off for the Young Warriors in the 84th minute when heading home Matthew Woe Ling’s free-kick.

Trinidad and Tobago had a couple of chances early, Corbin hit a couple wide and left-midfielder Aikin Andrews was also stopped at the near post by Curacao keeper Zeus De La Paz. Andrews turned defence into attack leading to Mitchell’s opening goal. Andrews’ long slide pushed the ball to Corbin, whose pass found Mitchell for a blast high into the net.

Corbin then converted a penalty, after Levi Garcia was taken down by defender Andruw Stokkell, and got his second with a powerful first-time finish, after initial forceful work up the flank by the overlapping captain and right-back Shannon Gomez.

“Today’s performance was a wonderful one,” T&T head-coach Derek King said after the win against Curacao. “We played well, we moved the ball around (and) we scored our chances. Today, the discipline was much better. A much improved performance.”

Making four changes from the opening 2-1 win over Suriname, King got good attacking play from the Young Warriors, but sometimes uncertain defending again Curacao, who were better than the scoreline might suggest. Missing for T&T was defence-minded central midfielder Kevin Goodard, who has contracted dengue fever, following an outstanding in the first game 2-1 win over to Suriname.

King started Mitchell and Andrews, two impact players off the bench in the opening match against Suriname, and also brought in Levi Joseph, the scorer in last week’s 1-1 warm-up draw with the Guadeloupe senior national team. He missed the first match due to injury.

“Jabari and Aikim Andrews, their performances from the last game...they deserved to start,” said King, who has so far used 17 of his 20-member squad, and hinted at maybe using the others, depending on the results. Yet to see action are capable Central FC goalkeeper Javon Sample, defender Josiah Trimingham and Nicholas Dillion.

King’s main concern would have been the backline of Shannon Gomez, Marteion Watson, Jesus Perez, Maurice Ford, while Texas-born goalkeeper Johan Welch, who is always off his goal-line and never looks sure on crosses into the box.

Likewise the defenders are individually all capable players, but look all at sea as Curacao forced a series of six consecutive corners at one point in the first half. During that time, a deflected Curacao shot went off the T&T upright.