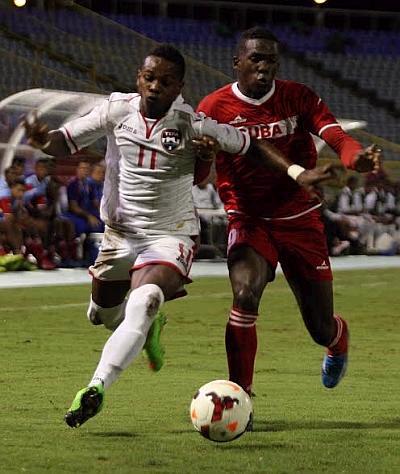 He wears the number 11 shirt for the T&T men’s Under-20 team and perhaps he’s caught your attention in his recent appearances for this country at the Caribbean U-20 Championship.

To many, Levi Garcia looks an extremely bright prospect for the future. The 16 year old Central FC midfielder scored in T&T’s 1-1 draw with Guadeloupe at the Dwight Yorke Stadium two weeks ago and scouts from Europe are already keeping their eyes on the player during the current Caribbean Finals.

Garcia has the attributes of a ace attacking midfielder in the making—good vision and composure, strong on the ball and good passer, good use of both feet with a proper shot on goal. At this stage of his game, with the right exposure and development, he will only get better. He’s played in two of T&T’s Caribbean qualifying matches so far, linking up well with the likes of teammates Kadeem Corbin, Aikim Andrews, Akeem Garcia and Jabari Mitchell.

Garcia comes from a family of three brothers and two sisters and credits his 26 year old brother Daniel for pushing him to success.

“I have to credit Daniel. He’s always there for me. If I have to go training or to a game he will get the taxi or rent a car for me to get there. He pushes me all the time to do better,” Garcia says.

But it’s not just Daniel that keeps Levi going. When asked what inspires him daily to keep playing the game and stay driven, his immediate response was “Jesus first and everything else after.”

“I like Barcelona because of how they pass the ball. I like to look at how their players run off the ball, the crosses, their style and their work rate. That’s how I like to see football played,” he said.

Levi hails from Santa Flora and is a past member of Siparia Spurs, T&TEC and is also a student of Shiva Boys College. He has a goal set before him which is to end up at Barcelona some day.

“It’s important for my family that I keep playing the game and make something good of myself. I want to be successful and I want to keep playing. I see myself at Barcelona or another top club out there in five years time,” the versatile number 11 said.

“Qualifying for a World Cup is one of my other dreams either at U-20 or the senior level. We came close in 2013 with the U-17s but now it would be great if we can go a step more.”

Garcia and the T&T team will play in the Caribbean U-20 Final tomorrow from 7.30 pm at the Hasely Crawford Stadium in Port-of-Spain before entering the Concacaf Final Round of World Cup qualifiers in Montego Bay in January. They are attempting to qualify for next year’s Fifa U-20 World Cup in New Zealand.