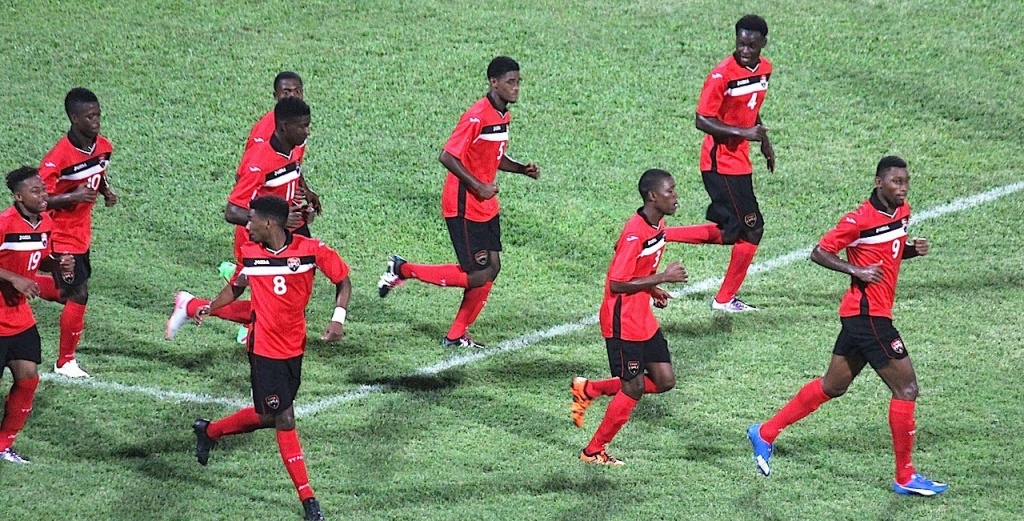 Trinidad and Tobago’s Under 20 Men’s Team demolished Turks and Caicos 11-0 in their second CFU First Round encounter at the Ato Boldon Stadium on Friday night to move to the top of the group table on six points and virtually assure themselves of a place in the CFU Final round in Curacao in October.

Only the group winners advance on an automatic passage which will be determined when T&T (six points) faces St Lucia (Six points) from 6:30pm on Sunday as St Lucia defeated Guadeloupe 1-0 in the earlier match on Friday. But T&T are likely to at least finish as either first, second or third best runner up team among the sides in the four groups.T&T got out of the block in blistering pace on Friday as the Turks and Caicos proved to be little match for the Brian Williams-coached unit.Central FC forward Nicholas Dillon led the way with five goals in the evening, scoring in the 11’, 29’, 49th, 61’ and 65′. DirecTV W Connection’s 15-year old midfielder Isaiah Hudson notched a pair in the 15′ ad 58′ with substitute Micah Lansiquot finding the net in the 72′ after Noah Powder struck in the 56′. Kierron Mason had earlier put T&T 4-0 ahead in the 46th minute. Morgan Bruce put the final nail on the visitors with a goal in the 83rd minute. There was hardly a shot on goal for T&T goalkeper Jabari Brice to handle on the evening.T&T head coach Brian Williams later said he was delighted with the onslaught but still cautious heading into Sunday’s match with St Lucia.“It was a good feeling to see the way we scored the goals tonight. Not disrespecting Turks and Caicos but we knew this was the game where we had to score as much goals as possible as St Lucia also won today and come Sunday’s game, goal difference could play a part in who tops the group,” Williams said.“At this point I am pretty pleased but we take every game step by step. Sunday’s match will not be easy because St Lucia have looked good and now we will prepare to go out there and get the victory.”Dillon added that his dedication and hard work paid off with the five-goal performance.“I had a good training session going into the game and since the first game I felt my form was good. Coach had emphasized to me to be more aggressive going to the ball and I was able to do that today and get the goals. Coach told us at half time to not be relaxed and to go out there and kill them off and we were able to do that in the second half,” Dillon stated.Guadeloupe faces Turks and Caicos in the earlier game from 4pm on Sunday with T&T taking on St Lucia from 6:30pm.In other CFU qualifying action on Friday in Santo Domingo, Jamaica suffered a shock 2-0 loss to St Kitts/Nevis at Estadio Panamericano.St Kitts forward Tahir Hanley scored second-half goals in the 60th and 83rd minutes to give his team the three points against the Jamaican side coached by Ricardo “Bibi” GardnerJamaica, who defeated Dominica 2-1 in their opening game on Wednesday, have three points with one game remaining against Dominican Republic on Sunday.St Kitts & Nevis are also on three points after going down 1-2 to hosts Dominican Republic in their first encounter. Dominican Republic are currently top of the group after defeating Dominica 3-0 on Friday.