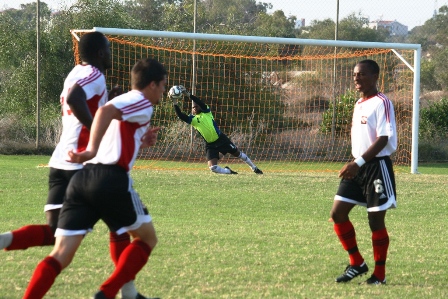 Trinidad and Tobago's national Under-20 footballers have a lot of hopes resting on their shoulders when they go into their final 2009 FIFA U-20 World Cup Group A encounter against Paraguay at the Al Salam Stadium today from 9:30 p.m. (3:30 p.m. T&T time).

Not only does coach Zoran Vranes' team have the responsibility of boosting T&T's footballing future from the experience chalked up in the "Land of the Pharaohs" but the Egyptian fans have pleaded with skipper Leston Paul and his teammates to make the hosts' passage to the second round easier by ending on a high against the Paraguayans.

Egypt are in the hot seat and need to win their final Group A game against Italy, but if they draw, anything other than a loss for Paraguay could spell danger for the home team as they will then have to depend on finishing among the top four third place teams moving onto the next round.

Even Trinidad and Tobago have a theoretical chance of getting in among the best third placed teams but they would have to win by a handsome margin as they currently hold a minus-four goal difference as compared to Egypt's plus-two.

"You must beat Paraguay. Do it for us and do it for your country," one Egyptian fan pleaded as T&T's young Soca Warriors made their way on to the bus ahead of training on Tuesday.

Already seven countries have booked their spots in the Round of 16 with a game to spare. Spain and Venezuela secured their places in the last 16 on Monday and were followed by Ghana and Uruguay the following day.

And FIFA also stated: The quartet's results so far also mean Italy, Paraguay and Germany can start planning for the knockout stages. This trio has each taken four points from their two matches. All three are guaranteed to finish among the four best third-placed teams at the end of the group phase, even if they now lose their final first round fixtures.

T&T will want to leave on a high note for their efforts so far, going close to finishing with a good result against Italy on Monday, before going under 2-1, with a goal being disallowed.

Aside from first-time participants Tahiti and Venezuela, none of the nations at this year's U-20 World Cup had as long a gap between appearances at the finals as Trinidad and Tobago, who last qualified in 1991 in Portugal.

Goalkeeper Glenroy Samuel said that despite T&T's 4-1 loss to Paraguay in a warm-up match prior to Egypt 2009, he is optimistic of a better result this time around.

"We have improved and we know how they play. I expect us to give a much better showing in this match than when we lost to them in Venezuela," Samuel told Trinidad and Tobago Football Federation (TTFF) media officer Shaun Fuentes.

"So far we haven't done too badly here but we want to leave Egypt with something to celebrate. A win would be nice, but even a draw with a strong performance will be pleasing for me and my teammates.

"We didn't win any games in South Korea at the Under-17 World Cup so it would be a really good feeling to get something here before we go back home," he added.

Vranes is not expected to make too many adjustments to the line-up, knowing that T&T's aim is to field the best starting team with the hope of finishing well.

"No, we want to finish in the best way possible," said the coach. "Every player deserves the chance to play but we will make sure our best team is out there and we will give everything we have to try and come away with a victory."

In spite of the team's failure to pick up a point so far, there is much to take from the Young Warriors performance, as former national head coach and current FIFA Technical Study Group member Alvin Corneal pointed out while in Cairo this week.

"I witnessed the two matches and have recognised various areas of transformation which we shall place on record and await the benefits," Corneal said.

"The competitive spirit of this team is remarkable. The intensity of their tackles, the effectiveness of their 50/50 challenges and their methodical services from the wing defence to the strikers have sent messages that our country's national footballers are now competitors at the international level amidst the highest level of competition at their ages.

"Our opponents are all full professionals and we are making them respect our contribution. Surely, we have made mistakes and paid for them, but that is one area which must be addressed more seriously," he added.

"Even with those mistakes and two goals, this bunch of youngsters epitomised the character, discipline and commitment which all our national teams need.

"I am extremely proud of these guys and it gives me the feeling that better days are not too far away for our image on the international football arena," Corneal concluded.