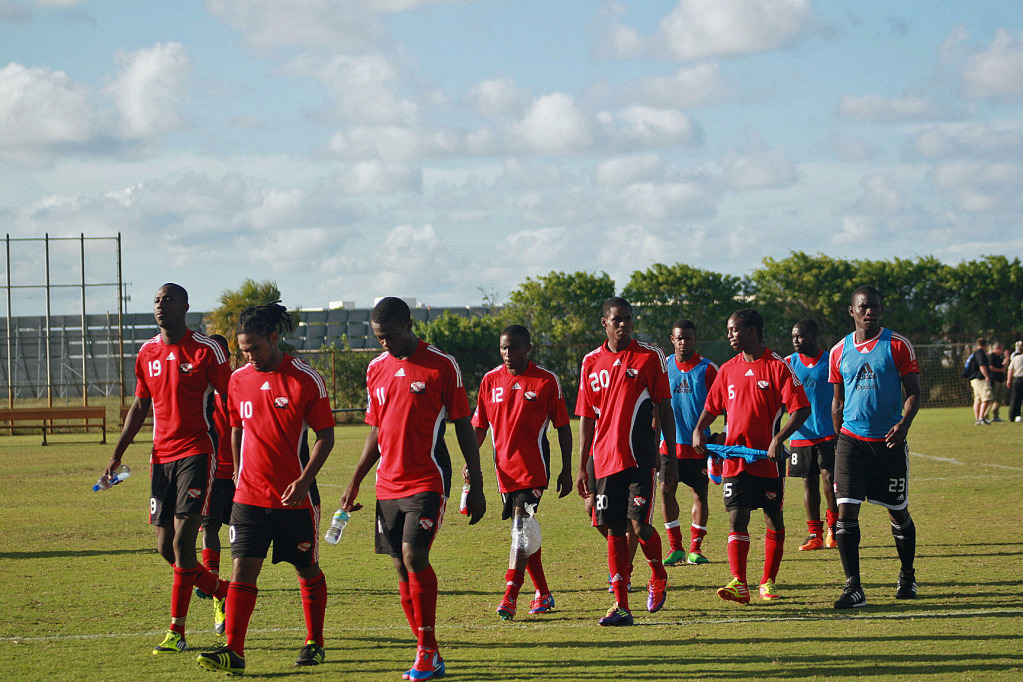 Returning Strikers and new signings were given starts by head coach Daryl Shore.

The Strikers proved the more dangerous side the early stages of the match. Just 10 minutes in, Lance Laing nearly reproduced the freekick he scored last week against Old Dominion University. This time the Jamaican’s shot was narrowly deflected wide.

Minutes later Andy Herron would get his first of several chances. Miscommunication between the opposition’s goalkeeper and defense created a turnover at the edge of the penalty area for Herron who was left alone with the keeper.

The Costa Rican forward didn’t fully capitalize on the opportunity to put the Strikers ahead, as his shot was easily saved by the keeper.

Team captain Abe Thompson limped off the field in the 24th minute. His replacement was Aly Hassan, a trialist who has already found the net twice this preseason.

In the 33rd minute the Trinidad and Tobago Olympic side had a great chance to score first. A lapse in concentration from the dependable Toni Ståhl left the other team’s forward with plenty of space ahead of just Matt Glaeser. The Strikers’ goalkeeper made himself large enough to put off the opposition’s forward; his lobbed shot went just wide of his goal.

The Strikers scored five minutes later when Andy Herron was taken down in the box after rounding the keeper. The 34 year-old sent the keeper the wrong way on the penalty kick to put the Strikers deservedly ahead going into the break.

As is custom in preseason games, coach Shore made several changes at the interval.

Jack Stewart and Alfonso Motagalvan were replaced by defenders Nicardo Blake and Emilio Orozco. Center back Conor Shanosky stepped into a defensive midfield role, and Pat Otte came on for the dynamic Walter Restrepo.

Trinidad and Tobago started the second half the brighter side. Within minutes they drew a foul on the edge of the box and had a legitimate penalty appeal turned down by the referee. The team was pressing hard for an equalizer.

The equalizer would come in the 51st minute. A freekick was whipped in from the right and was met by the head of a Trinidadian player. Matt Glaeser was helpless in goal as the header flew past him and into the net.

Glaeser would come up huge just two minutes later though. A Trinidad and Tobago player sprinted around defender Emilio Orozco on the edge of the touchline to find himself alone with the Strikers’ goalkeeper. Diving to the ground, Glaeser met the near post shot with his big hands to parry the ball away.

Glaeser would be replaced by David Martin in the 70th minute. The goalkeeper spent last season with the Atlanta Silverbacks Reserves, and has spent preseason with the Strikers after impressing during an open tryout.

Defender Toni Ståhl was sent off in the 78th minute, leaving the Strikers short-handed.

A man down, the Strikers showed great resilience and put up a fight. Their reward would come in the 88th minute when Andy Herron scored his second goal of the match, slipping the ball around the Trinidad and Tobago goalkeeper following a through ball from strike partner Aly Hassan. The match finished shortly after, 2-1 in the Strikers’ favor.

The Fort Lauderdale Strikers remain unbeaten thus far in preseason matches. The Strikers’ next test will be against the Canada men’s national under-23 soccer team on Sunday. Kickoff time for the match—which is free and open to the public— is 3:00 P.M. at Kics Sports Complex in Sunrise.

Following their convincing 4-1 win over local club Honduras 5 Stars on Sunday, T&T went into the game knowing that their second game opponents would pose a tougher contest but would still have finished the encounter feeling that the result could have gone in their favour had it not been for some indecisive finishing.

Goalkeeper Andre Marchan, with just two stops to make in the match, gifted the hosts a penalty in the 26th minute when he hacked down Costa Rican striker Andy Herron who moments later converted by hitting into the right of the net.

Prior to that Jamaican Lance Laing swung a free kick which took a deflection and went inches over.

T&T didn’t create much openings in the first half except for a Jomal Williams effort from a short free kick which drifted wide of the right post. On five minute midfielder Jeromie Williams also had a good try when he lobbed advancing goalkeeper Matt Glaeser.

Fort Lauderdale proved to be worthy opponents with some of their players having past experience with the likes of DC United, Brazilian club Flamengo, Philadelphia Union, Houston Dynamo and Rochester Rhinos.

Double goalscorer Herron has 17 appearances for Costa Rica is a former player with Columbus Crew and Chicago Fire.

In sunny conditions, T&T lifted their game in the second half and the hosts weren’t too impressed by T&T’s aggressive approach with their head coach Daryl Shore voicing his disapproval of the referee’s decisions on a few occasions and at one point play was held up three minutes as Shore and members of his bench threw water bottles onto the field to show their frustration.

But T&T seemed to be spurred on and got their equalizer in the 51st minute when Jayson Joseph was brought down on the right of the box.

The T&TEC midfielder then sent a perfect delivery into the centre of the box and defender Leslie Russell’s glancing header into the left corner left Glaeser with little chance of a save.

Shortly after Jamal Gay worked himself into a one on one with Glaeser after cutting in from the left but his effort from a tight angle was blocked low down by the towering ‘keeper.

Both teams had some anxious moments in defense with Ally Hassan’s header hitting upright and then substitute Marcus Joseph’s left footed free kick from the edge of the box crashing off the crossbar in the 74th minute.

Columbus Crew midfielder Kevan George entered the game in the second and made a good first impression with his solid presence and strong tackling. Head Coach Angus Eve made several second half changes, introducing Jean Luc Rochford, Trevin Caesar, Joevin Jones and George in the second half.

Fort Lauderdale went a man down in the 78th minute when defender Tony Stahl (ex-Philadelphia Union player) was sent off for a rash challenge which led to the hold up in play as the home team’s bench voiced their disapproval.

Then W Connection’s Williams had a great opportunity to put T&T ahead when he found himself in an inside right position within the penalty box but took a step to many instead of shooting and lost his footing in the process as a defender closed him down.

At that stage, T&T seemed likely to find a way through but it was not to be as Fort Lauderdale kept their shape and defended strongly for the remaining minutes.

They would punished T&T down the stretch and got the winning goal when Hassan played a ball through to Herron who made no mistake, hitting low past Marchan to put the hosts 2-1 ahead in the 88th minute.

T&T will continue their preparations with another training fixture (closed doors) against Canada’s Olympic Under 23 team at the Holiday Inn Soccer Complex from 3:30 pm on Friday.