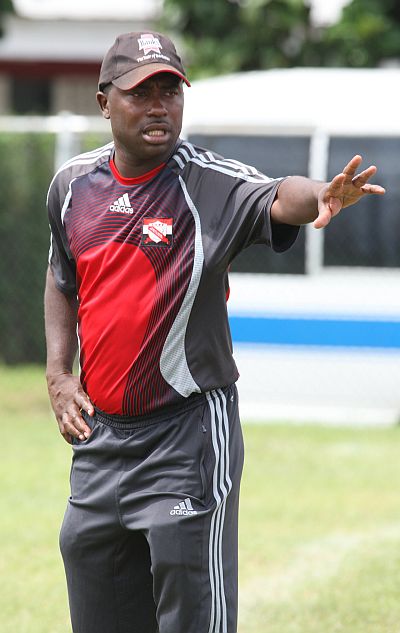 Trinidad and Tobago Olympic Men’s team head coach Angus Eve announced his final 20-man squad on Tuesday morning to contest the final round of CONCACAF qualifiers for the 2012 Olympics in Carson, California from this weekend.

Eve thanked the players for the efforts and other members of the team offered words of encouragement and thanked those for their contributions in the qualifying campaign up to this stage which will see T&T face Mexico on Friday followed by Panama (March 25th) and defending champions Honduras (March 27th). The two finalists from the eight team tournaments will advance to the 2012 Olympics.

Columbus Crew midfielder Kevan George and Cordell Cato of Seattle Sounders who both joined the team in Fort Lauderdale did sufficiently well to maintain their spots in the team for the tournament while Polish-based defender Mekeil Williams and Orlando City midfielder Kevin Molino will both join the team from Wednesday.

W Connection midfielder Jomal Williams at age 17 is the youngest member of the squad. Defender Selby was hampered by a niggling injury and as such had to be omitted from the final squad.

“It was a difficult decision because all of the guys have been fantastic. There wasn’t difference in the players in the squad. I think we have a very strong unit going forward,” Eve told TTFF Media.

“We picked 20 players with two goalkeepers, seven midfielders and defenders with four out and out strikers who can also play on the flanks as well as a couple defensive midfielders.”

“The difficult thing for me is that when we look back at the Pan American Games we did really well and here we have players who came in to strengthen the squad and that made the selection decisions a bit harder.

We didn’t have players like Daneil Cyrus, Sean De Silva and Kevan George and young Cato in the Pan Am Games. I must give credit to the players who helped to bring us this far and will still be part of the overall 35-man roster,” Eve added.

Reflecting on the training camp in Fort Lauderdale, he said: “It turned out very well. I got the chance to experiment with the guys and incorporating new guys into the set up. I think we finally have the right blend going into the tournament.”

Team skipper Bateau, during the team talk following the announcement of the squad told the players who will travel to Port of Spain on Wednesday to keep on aspiring to make the team again for the 2012 Olympics.

“We are one team and every player deserves credit. I want to tell the guys who are not going to LA with us to keep their heads up and keep on working hard to make the team again at a later stage.”

Cyrus and Gay also reiterated that the final squad of players will try to ensure that there is another opportunity for the omitted players to be back in the fray in London.