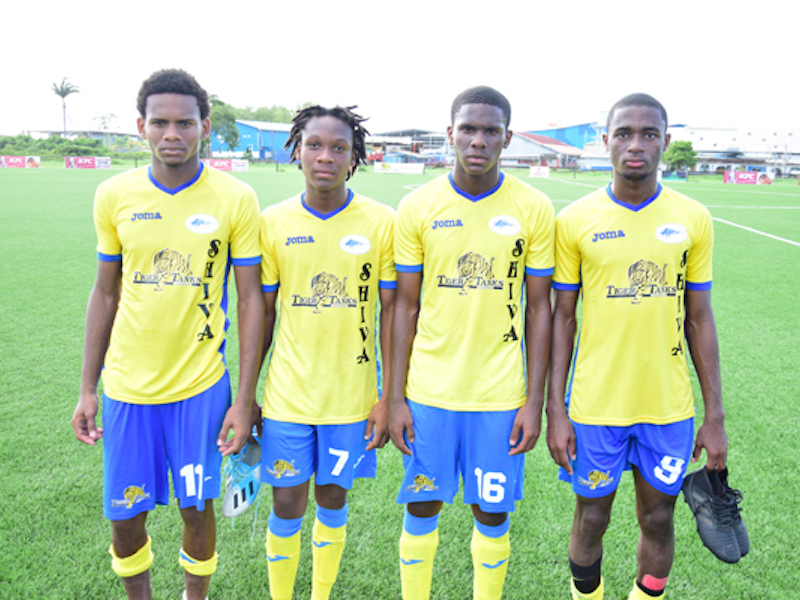 INAUGURAL champions, Shiva Boys, were unable to defend their KFC Goodwill Football Tournament title, but settled for a still credible third place finish when action climaxed at the competition’s second hosting in Guyana, on Sunday.

Having played unbeaten in 2019 and maintained momentum at this year’s edition, the TT team’s winning streak came to an end on Friday after losing 1-3 to Lodge School, via kicks from the penalty spot.

During the match, Shiva Boys continuously pressed for the go-ahead goal. However, the Lodge School defence stood firm and held its own after full and extra-time had passed.

Lodge goalkeeper Rashad Roberts saved the opening penalty which was followed by three misses from the TT outfit, handing Shiva Boys’ its first loss of the tourney after two editions.

In the third place playoff against the visitors made light work of DC Caesar Fox (Waramadong) by winning 3-1. TT’s Stephen Thomas opening the scoring in the 15th minute while the tournament’s highest goalscorer, Adica Ash, added two more goals to seal victory and the bronze medal position.

Shiva Boys began its title defence on December 16 with a powerful 3-0 victory against Annai Secondary courtesy hat-trick hero, Ash. The TT-based outfit then advanced to the semi-final via a 6-2 beating of Annandale Secondary. Ash was once again a main contributor as he and team-mate Jamal Lewis netted a brace each while Flex Lewis and Nigel Carraby grabbed one each.

Annai Secondary went on to win the second KFC Goodwill Football Tournament by trumping Lodge Secondary 2-0 in the final.