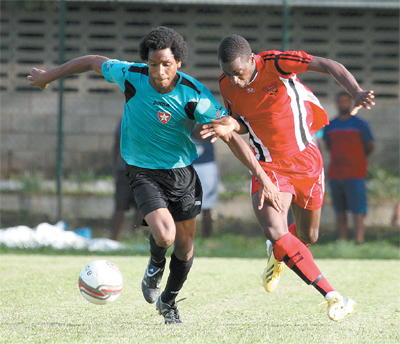 Westside Superstarz, led by a brace from Qian Grosvenor, soared to the top of the Blink/bmobile National Super League standings on Wednesday, the closing day of Match Day One, when the club eased past Tobago’s 1976 FC Phoenix 3-0 at the St Anthony’s College Ground, Westmoorings.

A former St Anthony’s College standout, Grosvenor added to Akim Ash’s opening goal in the 60th minute, with efforts in the 68th and 70th minutes.

The win saw Westside go top of the 13-team standings on goal-difference, contrary its start last season when it lost its season opener, before going on a strong run which saw it at the top of the standings for large spells.

Tobago’s only other club in the competition, Stokely Vale, meanwhile, opened its season with a 2-1 win over Defence Force. Again, all goals came in the second half.

Dominic McDougall, the club’s top scorer last season scored just after the hour-mark, which was doubled seven minutes later by a Krishawn Joseph effort. Defence Force pulled one back late through Michael Edwards in the 88th minute.

With Round One just concluded, Westside sits top just ahead (on goal-difference) of Real Maracas, Club Sando, Malabar FC and Stokely Vale, all of which secured wins on Sunday.