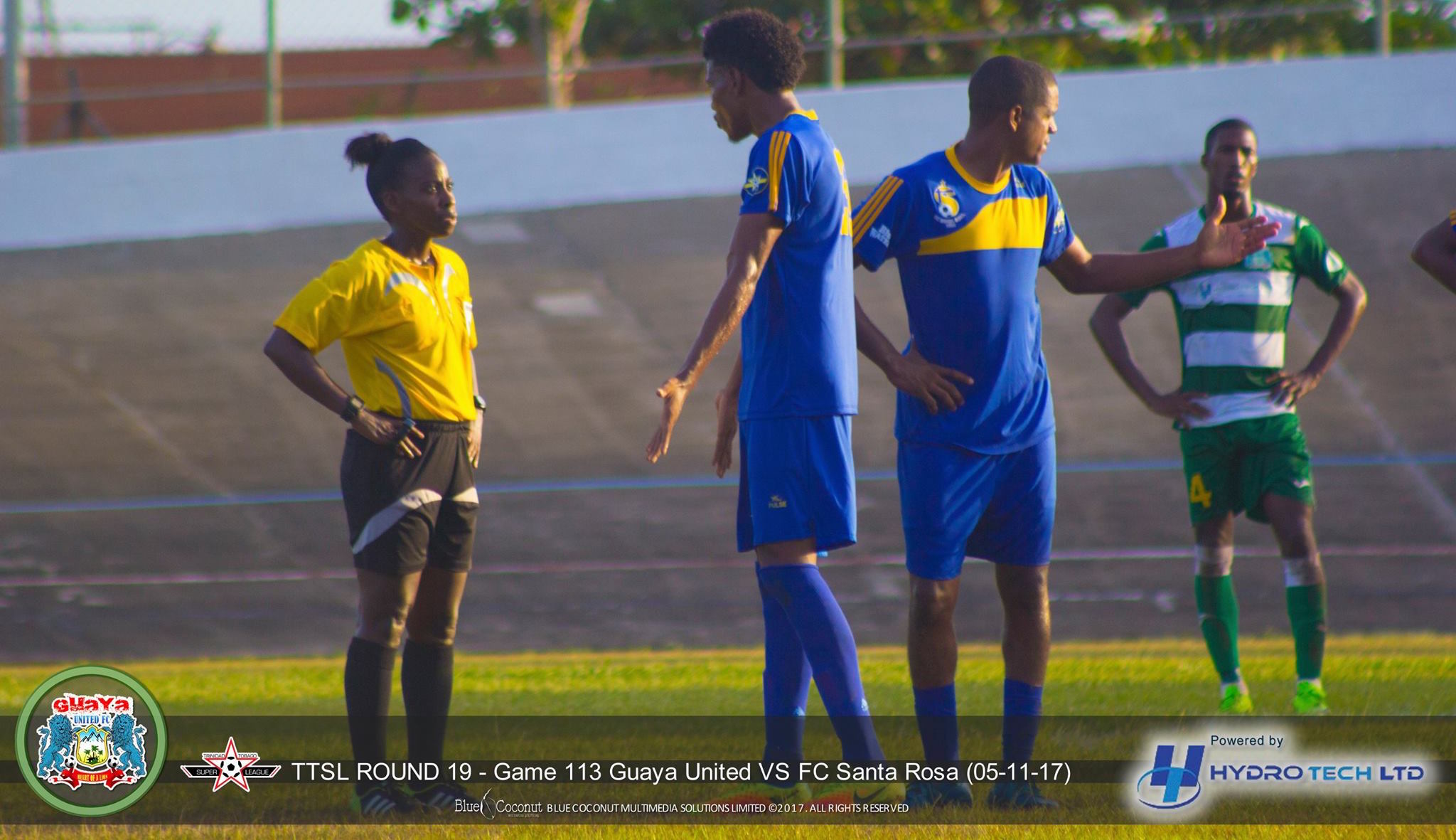 President the Trinidad and Tobago Football Referees Association (TTFRA) Joseph Taylor, says that respect must be shown to all involved in local football, in particular the referees.

Taylor was speaking following the situation where a referee was verbally attacked during a TT Super League match between the “Big Cannons” FC Santa Rosa and Guaya United FC at the Arima Velodrome on November 5.

President of the TT Super League and FC Santa Rosa coach Keith Look Loy, and FC Santa Rosa assistant coach Jovan Rochford, were irked at the manner in which referee Cecile Hinds dealt with a collision between Santa Rosa attacker Rashad Griffith and Guaya United FC goalkeeper Shane Mattis. Look Loy and Rochford were removed from the sidelines by Hinds.

FC Santa Rosa have since issued an apology to the TTFRA for the reaction by their coaches towards the referee during the Super League match.

Taylor said everyone must respect each other’s role in football as this will lead to progress in the sport. “When we look at professional leagues such as the English Professional League, the Italian Professional League and the Mexican League then we will see that they have standards. If we call ourself a professional league or a semi-professional league we must have standards. Even if you don’t feel that you are being treated fairly there are processes to follow and I think that is how we have to address it. If we are to work together we must make sure that we respect each other’s role and address it (when problems arise).”

The apology issued by Look Loy to the TTFRA stated, “I write regarding the incident and referee’s incident report in the match played between FC Santa Rosa and Guaya United FC on 5 November 2017.

“FC Santa Rosa is of the view that the referee in charge of the match, Cecile Hinds, was dangerously slow in her handling of two head collisions involving Santa Rosa players. The second collision resulted in our player being taken to the hospital unconscious. This provoked an undesirable response from Santa Rosa personnel, including its coaches.”

The letter continued, “FC Santa Rosa disputes certain details of the referee’s incident report but, nonetheless, we wish to apologise to Miss Hinds and to the TTFRA for the insulting language directed to her by myself and Jovan Rochford.

The match was almost at an end, without confrontation between Santa Rosa and the referee, when this incident occurred. We were angry about her handling of the head collisions and emotions boiled over. We should have maintained self control. I would appreciate it if you would communicate the sincere apologies of both coaches and the club to Miss Hinds.”

Griffith is currently recovering from his concussion and is due to visit a doctor tomorrow. Officials of Santa Rosa are hoping that after medical clearance he will rejoin FC Santa Rosa in training on Thursday.

With two days to go before Bethel United’s Trinidad and Tobago Super League (TTSL) clash with UTT at the Montgomery Recreation Ground in Tobago, neither officials of the TTSL nor of the Trinidad and Tobago Football Referees’ Association (TTFRA) are able to confirm whether referees will show up for the encounter.

On Sunday 12 November, referees from the TRA were a no-show for two TTSL games involving Bethel and Siparia Spurs, and 1976 FC Phoenix and WASA FC. The refs staged a boycott allegedly in response to comments made by FC Santa Rosa coach and TTSL president Keith Look Loy following an FA Trophy game against Phoenix last month.

“Until a letter of apology is sent to satisfy us,” former FIFA referee and TRA head Noel Bynoe had told Wired868, “we will continue to boycott. We as Tobagonians are a decent people. We don’t leave our homes to come and cheat people…”

The TRA reportedly took great umbrage at Look Loy’s assertion that “Clubs from Trinidad view a match in Tobago with great distaste as they believe they have little chance of winning.”

Look Loy has since apologised for his statements. And although the TRA were set to meet to address the issue last night, Wired868 has been unable to reach Bynoe for a reaction despite numerous attempts.

TTSL secretary Camara David said the TRA have expressed an interest in resuming service but he suggested that they are keeping a close eye on the current disciplinary matter involving referee Cecile Hinds and Santa Rosa coaches Look Loy and Jovan Rochford before making any statement about their next step.

On 5 November, Hinds ordered the pair of Look Loy and Rochford off the Santa Rosa bench after they reportedly abused her in voicing their disapproval of her handling of a collision between Santa Rosa attacker Rashad Griffith and Guaya United custodian Shane Mattis.

The clock is ticking for both the TTSL and the TRA. David wants to finish the season as scheduled—without further delays or mishaps—and he hopes to play Sunday’s boycotted games before the League’s last match day on 10 December.

Tomorrow evening from 7pm at the Ato Boldon Stadium, the TTSL’s Caribbean Football Trust Limited (CFTL) Cup finals will take centre-stage with Guaya meeting Prisons FC. So when the hands reach 6 ‘o’ clock on Sunday evening, David will certainly hope that officials are leading cellar-placed Bethel and fifth-placed UTT on to the pitch.

According to Look Loy, the League coughed up $12,000 for Siparia Spurs and WASA to make the fruitless trip to Tobago last weekend so they will not want to engage in any further futile expenditure.

“As a consequence of this boycott by Tobago referees, with no prior warning to TTSL or FC Santa Rosa, the League lost twelve thousand dollars in airfare, which it will now have to purchase a second time,” Look Loy wrote in correspondence to the TTFRA earlier this week.

Although admitting that the TTFRA have neither control nor influence over the referees assigned for duty in TTSL games in Tobago, TTFRA President Joseph Taylor and his 3rd Vice-president Osmond Downer are both hoping that the impasse will be settled quickly, allowing the TTSL schedule to proceed as planned.

“I have been trying to make some private interventions, hoping that good sense will prevail,” said Downer, who sees the current stand-off as a key juncture in the administration of local football.

“I would have hoped that they reached to a resolution [by now],” Taylor told Wired868.

The TTFRA President, however, indicated that referees in both Trinidad, and Tobago wanted to receive more respect from players and coaches, particularly Look Loy and Santa Rosa.

According to Taylor, the recent incidents involving Rosa and the match officials were the straws that broke the camel’s back.

“There must be some kind of standard met,” Taylor said, alluding to post-match Facebook posts uploaded by FC Santa Rosa. “[The TRA] wanted to draw to the attention of the TTSL and Keith Look Loy that certain behaviours will not be tolerated. […] Referees are disgruntled by Look Loy and Rochford’s approach to Hinds.”

Despite removing the Facebook post which served as a match report on Rosa’s defeat by Phoenix in the Round of 16 stage of the FA Trophy on 25 October, Look Loy has defended his team’s right to freedom of speech in the past week.

“FC Santa Rosa is a private organization, with full entitlement to the freedom of expression guaranteed by the Constitution of Trinidad and Tobago,” he wrote in his letter of apology to the TRA. “The article in question, which was not opinion but which included a statement of certain match facts, broke no law of Trinidad and Tobago, was not libelous, nor in contravention of any football regulation.”

Will Look Loy be more cautious of what he posts on Rosa’s Facebook page in the future? Does he think continued boycott action will prevent the League from finishing by its scheduled cut-off date?

Up until the time of publication, Wired868 was unable to reach the Rosa coach and TTSL President for comment. And no new posts by him had appeared on Facebook.