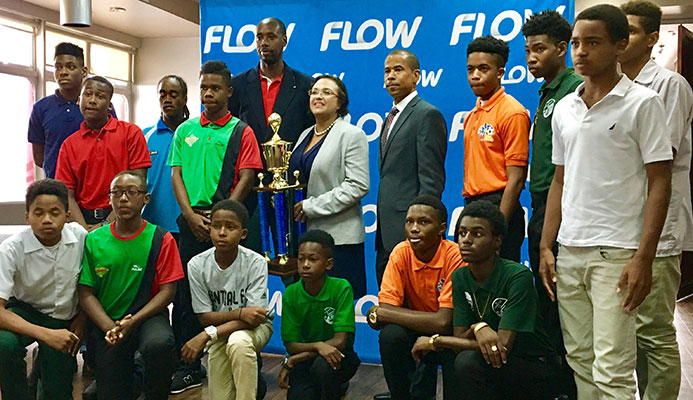 Dennis Lawrence, unknown to many, had walked in the shoes of those considered not good enough for the game.

Now, following an extensive playing career that took him all over the world; a FIFA World Cup, the professional leagues of England and Wales, then coaching at England's Premier League and winning the English FA Trophy as an assistant coach at Everton, to now back in his homeland as coach of the Trinidad and Tobago national team head coach following his most recent coaching stint abroad on the staff of the Belgium national team.

From a pint-sized youngster to 6-foot-eight-inches of a legend, the Morvant-born Dennis “Tallman” Lawrence, to put it short, went from being not good enough to enjoying a lengthy career as a player, now coach of his country's national team.

His headed goal against Bahrain propelled T&T to a historic berth at the 2006 FIFA World Cup in Germany. T&T becoming the smallest nation to qualify for a Men’s FIFA World Cup.

“I was told a million times ‘you would not make it’,” said the 42-year-old Lawrence, as he addressed a gathering including age-group players at the launch of the Flow Youth Pro League 2017 on Friday at the VIP Lounge of the Hasely Crawford Stadium in Port-of-Spain. “But I had belief in myself, I had belief in the people around me.”

Lawrence was the feature speaker at the launch of the new Flow YPL season which kicks off on Sunday with a slate of matches across Trinidad—kick off times 10am, 2pm and 4pm in the Under-13, Under-15 and Under-17 divisions respectively.

Youth powerhouse Jabloteh, champions of all three divisions in the last two seasons, will kick off their "triple double" defence against Club Sando at the San Juan North Secondary school ground.

This is where stars are truly born. Before representing their schools at InterCol, or donning Trinidad and Tobago national kits at various youth levels, top young footballers represent their respective clubs at the junior level of this country’s top tier league, the TT Pro League, putting their practice to the test.

Isaiah Garcia, the current T&T Under-20 captain, comes to mind as a good example. The W Connection teenager has been with the club since Under-10 and had progressed through the youth ranks long before becoming a Shiva Boys College star and T&T youth standout.

TT Pro League Chief Executive Officer Dexter Skeene, in his opening remarks on Friday during the YPL 2017 launch, said, “This year we continue to position this sport property the Flow Youth Pro League or the Flow Y League, as I like to call it, to become the best youth league in the region.”

Skeene explained the YPL, which runs between March to July, is strategically positioned and provides a platform for development of the youth of Trinidad and Tobago.

“From my perspective, it is the most critical property and brand extension in the TT Pro League’s arsenal,” added the Pro League boss who went into detail. “The Flow YPL is important because it is the place where the young footballers hone their skills on the way to playing at the senior level, to becoming professionals, to representing their country. It is where they will learn the rudiments of the game and the tricks of the trade, while being inculcated with the work ethic necessary to make their dreams a reality.

“It is here they receive the exposure necessary and competition against the best talent in their respective age groups throughout the country. It is the one league that has the quality and concentration of players on display, gathered together within several specific age groups.

“It allows true development to take place as games are played once per week on Sundays so that teams, coaches and players have six days to prepare, improve and plan for the following weekend’s games without interruption. Coaches have the opportunity to work on technique and tactics while the trainers and psychologists work on the physical and psychological aspects of the game respectively. It will afford longer recuperation times for players to recover physically from injuries from the previous games, which will increase playing time, the number of games played and ultimately game experience.”

Cindy-Ann Gatt, Director of Marketing at Flow, said her company, now in their second term of a three-season partnership worth $900,000 with the League, is looking forward to another exciting season. Gatt also said that Flow will reward the efforts of players with the introduction of the Player of the Month and Team of the Month in each division.

Gatt said Trinidad and Tobago football heroes such as Shaka Hislop and Dennis Lawrence had different paths to success, “but it all began with an innate love for the beautiful game.

“As the sponsor of the Youth Pro League it is that instinctive passion for the game that each footballer possesses that we are here to support. That spark that you know resides in you--that fuels your desire to excel in this sport, is what we are on board to nurture. So that spark becomes your success in whatever form it takes in the long run, from player to legend—Trinbagonian legend or an English or European legend, or a World Cup legend, anything that comes after. That is our reason for joining you in the Youth Pro League.”

Lawrence, who represented Caledonia AIA, now Morvant Caledonia United, and Defence Force before his move to the United Kingdom, said that coaches and young players are given a fantastic opportunity in the Flow Youth Pro League.

“You [must] have a dream—an ambition,” said the former Wrexham and Swansea City defender. “Enjoy… enjoy, but it is a part of your development, because one day, just like what happened to me, some guy from the UK could be standing in that stand and he could walk over to you and [ask]: ‘what is your name? I would like to speak to you in regards to taking you abroad’. Do not let the opportunity pass, please apply yourself the right way, conduct your work in a professional manner and the sky is the limit for you.”

Less than two months ago Lawrence quit his position as Belgium national senior team scout to take up the post of T&T national team coach.

Lawrence had served under Italian Roberto Martinez for the better part of six years as an assistant coach at Wigan Athletic and Everton and in the English Premier League before following Martinez, who took charge of Belgium.

“What I think is important for the coaches and the players to understand, is that you have to believe in your dream [and that] development is a process,” said Lawrence who recalled his years employed at a grocery for just TT$125 per week.

“(…) what I would like to say to the coaches is please do not allow the result to [negatively] affect the development of the young players. Players are the product. As a young coach trying to develop young talent, your success, from my point of view, should be one day be able to see your players go on to represent the national team, to go abroad and obtain contracts. The immediate result, for me, is irrelevant. What is important is that we understand and recognise the importance of the product—the young players.”