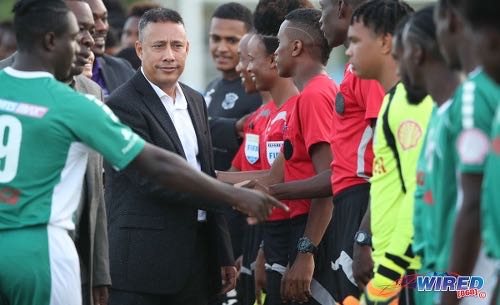 Minister of National Security Stuart Young has cleared the air on whether the Youth Pro League can go ahead or not. There were conflicting messages from the Ministry of Health and the Commissioner of Police on whether the league can kick-off in August. At Saturday’s virtual press conference with the Ministry of Health, Chief Medical Officer (CMO) Dr Roshan Parasram said all events with children should be held back until September.

However, Commissioner of Police Gary Griffith said permission was granted from the health ministry for the Youth Pro League to go on.

And at yesterday’s virtual Ministry of Health media conference, Young addressed the matter. He said, “The CMO’s advice is exactly as he stated but the regulations don’t prevent it so at the end of the day there is no law that is being broken but the medical advice is for them just to be cautious so I don’t think this is a conversation that can continue to mushroom.”

Young confirmed both he and the Minister of Health Terrence Deyalsingh has had conversations with commissioner Griffith “including on Saturday”.

The CMO has advised that activities with children be withheld for the next two months, “Children should have been held until September. The regulations, as far as I know, don’t speak to the age of persons being able to conduct any sort of activity,” Dr Parasram said.

A source close to the league who spoke to us on the condition of anonymity said that "A decision on whether organisers will honour the CMO’s advice and postpone the start of the league could be made as early as today when the matter comes before a board meeting of the league today."

When contacted by Guardian Media Sports Commissioner Griffith said, "These comments continue to do nothing other than to confuse the life out of my Police Officers, as they are the individuals who have to enforce the law, and likewise parents as they are left to wonder if their children playing sport is against the law. As Commissioner of Police, to clarify this issue, the answer is no.

There is no law preventing any young person from participating in a sport. All that is required is that extra-curricular activity and sport, must not have more than the stipulation of numbers established in the Public Health Ordinance Regulations.

The CMO does not draft, approve, or enforce laws. I have received absolutely no policy from any Government official to stop any young person from taking part in sport. In fact, as the COP, preventing or trying to persuade young people not to play sport after being boxed in their homes for months, is an avenue that can frustrate many young persons and hence their energies can very well be diverted in non-productive, if not criminal avenues, hence these continuous comments trying to prevent young people from playing a sport, are indeed a liability from a TTPS perceptive, and does not help us in our role and function.

These strange comments yet again, are said without taking any consideration into the role of the TTPS, because what is the TTPS supposed to do? Go to every sporting ground, every football game, and start checking ID cards to see dates of birth?

Likewise, based on their logic, if an athlete is a 16 or 17 years’ old who is a very fit, healthy, high-intensity athlete or national player in a contact sport, it becomes a concern, but not if the athlete is 18 years or over. I challenge them to show what data they can produce to show this. The CMO seems to have a concern about a 16 or 17-year-old playing sport, but he does not have a concern when a set of children are packed into a cinema watching a movie.

Dozens of elderly persons, 80 years of age and above, playing bingo in an enclosed room, may be more susceptible to getting the virus than the same number of young, fit, healthy kids playing football, so the CMO may need to monitor such real concerns and not that of young persons trying to stay fit and healthy.

This can now also confuse National teams and Men and Women Club teams. The logic of the CMO and whoever else wants to support him is that if anyone is under 18 years, but on a National Senior team, or a Men or Women Club team, that they can be at risk to getting the Virus.

This makes very little sense, as again, there is nothing to show that a 16 or 17-year-old in a national or club team is going to be more prone to being a patient to COVID-19, to others who are 18 or 19 years on the same field.

There are however several measures that can be used to safeguard the concerns of the CMO, and it is not by telling young people not to play Sport, but simple protocols prior to, and after training and tournament matches, such as no huddling before and after games, no sharing of snacks etc, persuade non-attendance of supporters, which are basic policies done in other countries."