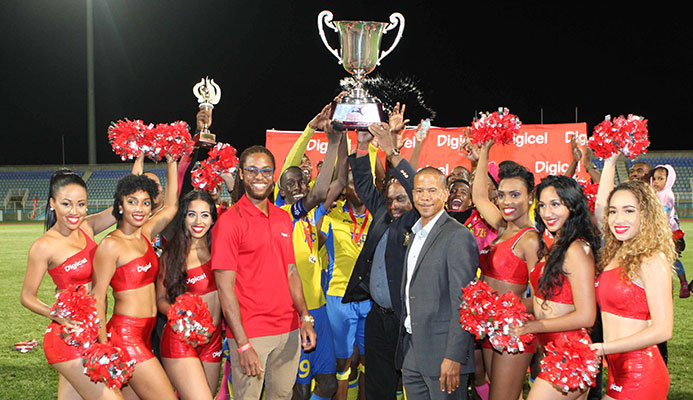 Marvin Gordon put his hands on his maiden trophy – since becoming Defence Force head coach 17 months ago – after the Army/Coast Guard combination defeated a weakened W Connection side 2-1 in the Digicel Pro Bowl 2016 final on Friday night.

Midfielders Jerwyn Balthazar and former Connection star Hashim Arcia scored within a space of three minutes at the Ato Boldon Stadium in Couva to put Defence Force in control, 2-0, by the half-hour mark before a stunning second half goal by Connection’s Aikim Andrews had many of the 3,000 plus spectators thrilled.

But the 30-yard cannon-strike, which found the top corner of goalkeeper Sheldon Clarke’s netting in the 77th-minute from a set piece, wasn’t enough to deny Defence Force their first trophy since 2013 and revenge against the side that defeated them 4-0 in the final of this season’s Toyota Classic last December.

Meanwhile Defence Force, who finished ahead of Connection, only by a single goal-difference, in a creditable third position in the Digicel Pro League behind champions Central FC and runners-up San Juan Jabloteh, ended the season with the Pro Bowl trophy and the $100,000 winners’ cash prize on the final day.

Gordon played down his side's third place finish in the League and Pro Bowl title by saying the season turned out "okay" but said he was thrilled to reward the Trinidad and Tobago Defence Force with the Pro Bowl title.

“But we weren’t consistent in the league and even missed finishing in the top two. We had some bad patches but it was learning experience for me in terms of being a head coach for the first time in a full season. Next season I will be more prepared as a head coach.

“We were able to end with the Pro Bowl title which is for the entire Defence Force—not just for me and of course the players who have worked really hard for me, but for the people at Defence Force who do everything to make sure we can come and play.”

Balthazar put the soldiers ahead in the 27th-minute on Friday night when he slid in beyond the Connection defence to direct a left side Aklie Edwards’ cross past goalkeeper Terrence Lewis.

Then rubbing salt to the wound of his former employers, Arcia executed a cool chip past Lewis after holding off a challenge from defender Jelani Peters from close up to score after 30 minutes.

However Arcia, who made the switch to Defence Force from Connection at the end of last season, failed to continue beyond the 44th-minute due to a hamstring strain, forcing Gordon into a premature substitution with the use of midfielder Akeem Roach following the break.

After the game, Arcia said Connection contributed a lot in his development as a player and while it has taken some time “to get into grove at Defence Force”, he was happy to help his new team become champions again.

Lewis, Connection's second choice 'keeper, did avoid conceding a third goal seven minutes before the break by diving to his right to put a left-footed blast from Ross Russell Jr. behind for a corner.

But Connection, despite being without twelve regular players due to international duties for their respective national teams, did have their chances on either side of the break.

“We could have done better,” said W Connection head coach Stuart Charles-Fevrier, who fielded a starting XI that included 19-year-old senior team debutant Jordan Riley, and a bench full of Reserve Team players due to the absence of 12 senior team players.

Fevrier also stood without some of the club’s top Under-18 players: Isaiah Hudson, Keston Julien, Kerron Mason and Isaiah Garcia, and 19-year-olds Kori Cupid and Jabari Mitchell who are all committed to the T&T Under-20 team preparing for Caribbean U20 qualifiers from June 15 to 19.

Charles-Fevrier continued, “We created four clear cut chances in the first half (against Defence Force) and weren’t able to score one, and made it very difficult for ourselves. [But] in terms of territorial play we had much more control. We were always in the game although Defence Force went two goals up, but in the end inexperience let us down because we didn’t have amount of experience on the pitch to really help us to overhaul a good Defence Force team.

“But I am very proud of the effort from our players. I felt the team we had tonight were capable of winning the game but it just wasn’t our night.”

Another Frederick cross two minutes inside the second half and Toussaint’s header was foiled by eventual final MVP Clarke, who had made a stop against Kevon Goddard following a sweeping move by Connection five minutes before the break.

Connection got close again when a 61st-minute Toussaint strike flashed overbar and moments later Clarke was forced into a save by Andrews.

However Clarke – not even on his best night – was unable to stop Andrews’ rocket which reduced the deficit 1-2.

Andrews had a similar attempt nine minutes later but was fractionally off with his attempt off a short Frederick free-kick flying overbar.

Defence Force had two early chances in the second half to increase the pressure on their opponents but substitute Roach drilled a 51st-minute effort wide following a cheeky feed from striker Devorn Jorsling, and five minutes later following another feed from the veteran forward, Russell, too, failed to hit the target from inside the box.

“It was a great game,” Gordon said. “W Connection really came and play regardless of having a number of younger players. They put up a good fight. Both teams had chances but we could have put away the game early.”