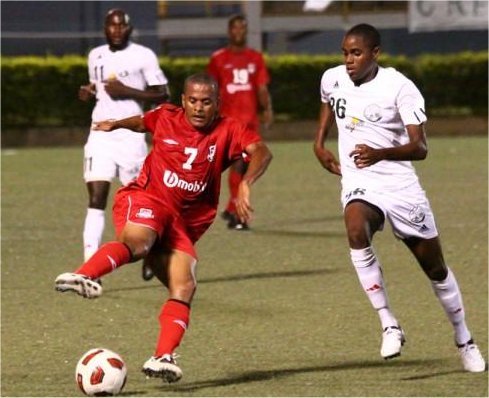 Defence Force won the battle, but not the war after they were ousted 5-3 on kicks from the penalty mark against W Connection in Friday night’s second Digicel Pro Bowl semi-final at the Hasely Crawford Stadium.

But in the second semi-final which ended goalless, Defence Force head coach Ross Russell would have agreed that he won the battle of limiting Connection’s attack.

Indeed he did just that; however his side troops failed to impress on the frontline with the match tied at 0-0 following the final whistle.

And in the kicks from the mark Balondemu Julius struck the upright in the Soldiers fourth kick allowing Connection’s Hughtun Hector the opportunity in the fifth to take victory and he did just that hitting past goalkeeper Kevin Graham for a 5-3 finish.

This after Connection’s Romauld Aguillera, Matthew Bartholomew, Keron Cummings and Kern Cupid and Defence Force’s Kerry Joseph, Kurt Williams and Rawle Fletcher were on target from the mark.

Defence Force, the 2010-2011 Digicel Pro League Champion, was inches wide of an item in the 20th minute of play with a Richard Roy cracker from a set-piece shaving the outside of goalkeeper Jan Michael Williams' far upper corner.

And in the 34th minute Connection’s Cummings spilled wide of the Defence Force upright after showing good strength against defender Corey Rivers inside the area.

Even from a set piece in the 56th minute, Kerry Joseph failed to put goalkeeper Williams into action hitting high.

And in injury time Connection substitute forward Bartholomew was at the end of Kemuel Rivers' low cross but his diving attempt only bundled the ball wide.

Joe Public is now one match away from retaining the Digicel Pro Bowl title following a hearty 3-2 performance over Caledonia AIA on Friday night in the first clash of a semi-final double header at the Hasely Crawford Stadium.

The Rajesh Latchoo coached side got off to a poor start when seven minutes into the encounter, defender Carlyle Mitchell headed back into his own net in what seemed an easy take for goalkeeper Marvin Phillip to hand Caledonia an early 1-0 advantage.

Caledonia, defeated 2009 finalist, failed to make back to back Final appearances when they allowed Joe Public back in the game twice before Andre Toussaint wrapped up a double with the winner in the 80th minute.

Joe Public meets two-time (2004 and 2007) champs W Connection in the Final on Friday 01 April. Connection reached the Final with a 5-3 kicks from the penalty spot victory over Defence Force following a goalless draw in the second semi-final.

Joe Public first equalized in the 24th minute through Toussaint.

The Macoya based club was gifted the opportunity after a collision between goalkeeper Kevin Graham and Walter Moore in attempt to cut off Hayden Tinto's cross from the left fell the ball to Dorion Robinson who played in the dreadlocked Toussaint for an easy finish.

Caledonia teenaged Guyanese winger Trayon Bobb had his side in front again three minutes before the break when he controlled Keyon Edwards' cross which defeated the Joe Public defence and blasted past a motionless Phillip for a 2-1 score.

However Caledonia gave up the advantage again when in the 70th minute Joe Public's Micah Lewis slipped in a shot from a tight angle beating Graham at the first post for a 2-2 score.

And ten minutes from time, Toussaint scored the winner and his second on the night slipping a low shot past Graham after he was picked out by Dorian Robinson inside the area.

It was probably the biggest win for Latchoo, pulling off a victory against a much more experienced coach in Jamaal Shabazz and placing the Lions into a Final in only his third match in charge since taking over from his now former superior Derek King.

Caledonia AIA were so busy out-playing Joe Public at times, they apparently forgot how dangerous Andre Toussaint can be.

And the little football giant with the deft touch made them pay a price when he scored twice to rally weakened, defending champions Joe Public to a come-from-behind 3-2 victory over Caledonia AIA of Morvant-Laventille at the semi- final stage of the 2010-2011 Digicel Pro Bowl tournament on Friday night at the Hasely Crawford Stadium.

The teams were evenly-matched and provided little work for the goalkeepers. Army striker Richard Roy once beat goalie Jan Michael Williams to a through ball, and later Roy also went close with a curling free-kick.

Striker Keron Cummings had W Connection's best chance, but he turned his close-up shot wide. And in injury-time, substitute striker Matthew Bartholomew failed to convert after Kemel Rivers swung a dangerous cross to the back post.

The proverbial lightning struck twice for Joe Public after their unlikely win over Caledonia--the team they beat in the 2009 final. The victory looked unlikely because for a long time, the "Eastern Lions" were basically chasing shadows, as Caledonia led 2-1 and were in control early in the second half.

Caledonia's midfield were dominating the champions and right-midfielder Akim Armstrong was particularly rampant. At one point Armstrong "shook" Keion Goodridge so badly, that the Joe Public defender tumbled to the ground. Then, the game turned on its head.

First, right-winger Micah Lewis levelled the score at 2-2 in the 70th minute when he hit his shot off the body of Caledonia's Jamaican keeper Kevin Graham, scoring from an almost impossible angle.

Caledonia were stunned and shut down. Hardly able to get a foot on the ball earlier, Joe Public now took over. And Toussaint dealt Caledonia a fatal blow 10 minutes from the end by gently stroking home a low shot from the centre of the penalty area, after taking Robinson's pass.

Earlier, Caledonia led 2-1 at the half. First, Joe Public central defender Carlyle Mitchell scored a seventh minute own-goal when he headed the ball past his onrushing keeper Marvin Phillip.

A collision between Cali keeper Graham and defender Walter Moore then allowed Eastern Lions youth striker Dorian Robinson to collect Hayden Tinto's cross and set up Toussaint's opening goal which levelled the match at 1-1 in the 25th minute.

But before the half ended, Guyanese teenager Trayon Bobb beat Phillip with a hard, low shot in the 42nd minute to reward Caledonia for superior ball possession.

Joe Public could hardly get a foot on the ball early in the second half. Frustrated Toussaint and Kareem Young were discourteous to woman referee Shane Da Silva, who flashed a yellow card. Then came the drama which won the defending champions the match.

On paper, W Connection would start favourites to win Friday's final. But by the way new coach Rajesh Latchoo was able to marshall his troops, it would be perilous to count out Joe Public, weakened or not,