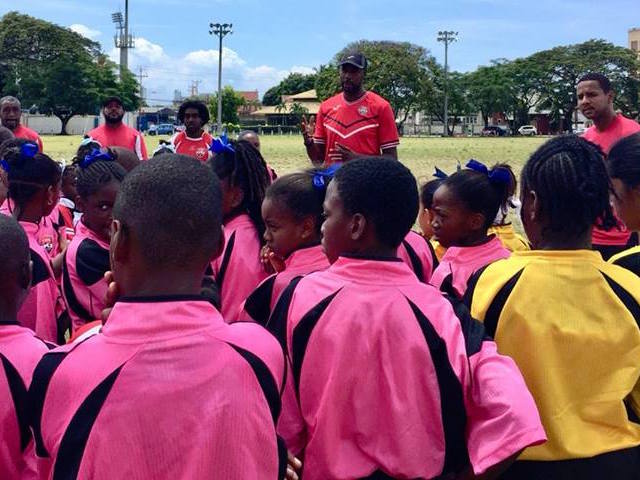 Another round of TTFA/Nu Iron National Primary Schools Coaching Clinics took place across the country today with one the feature activities taking place at the Nelson Mandela Park in Port of Spain with the attendance of National Senior Men’s Team head coach Dennis Lawrence.

Just over fifty participants from different schools in the North district took part in the two-hour exercise in which Lawrence shared his knowledge and experience with the youngsters. Some of the drills included small sided games, passing, controlling and shooting drills among other skills.

TTFA Technical Director Anton Corneal who is spearheading the project, spoke of the importance of having role models such as Lawrence interacting with the youngsters.

“This was a fantastic occasion today where we had one of our role models, a guy who played in a World Cup was celebrated for playing a major part in getting us there, now being able to show up on a training field and interact with these youngsters who are falling in love with the game. This is all part of the process and I think they were all delighted to get an opportunity to be up close with him and hear his words and spend some time with him on the training field,” Corneal said.

“The FA has embarked on a mission to spread the game and take the games to these kids through the Primary Schools initiative. It will not be an overnight success but every week we are seeing an increase in desire and will from kids to get involved and to play. And what we are also experiencing is some schools coming to us and wanting to ensure that they are involved in it which is certainly a positive sign for us.

“This project is not just about unearthing talent or finding the next National Men or Women’s player but is also using football as a way of teaching teamwork and promoting physical and social development among our nation’s youngsters,” Corneal stated.

Lawrence meantime had stated these type of exercises were important in early development.

More on the Project

The Project is being hosted by the TTFA in conjunction with titled sponsor Nu-Iron and the Ministry of Education and is titled “Investing in our Youth. Kickstarting their Development.”

The campaign will target 1,000 kids learning and playing the game at various locations throughout the twin-island every week.  Every kid is being  outfitted with uniforms provided by the TTFA as part of Nu-Iron’s sponsorship arrangement.