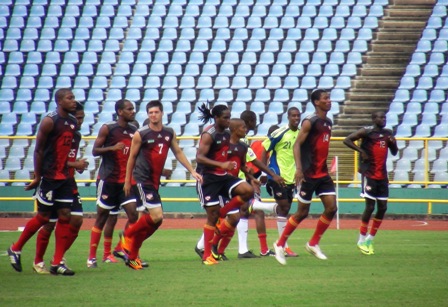 Trinidad and Tobago’s senior footballers will be aiming to reverse the results when they face Finland in their first international fixture for 2012 at  the Hasely Crawford Stadium from 5pm on Sunday.

The last  meeting between the two countries ended in a 2-1 win for the Europeans at the same venue in January of 2003. Jason Scotland scored the opening for a T&T side that had just two regulars in the first team after several others were missing in action after protesting against the TTFF mere hours before the encounter. Kenwyne Jones also came off the bench in that match. Overall, both teams have won two games each with one drawn,

The Finns have returned for what they hope will be another worthwhile work out as they prepare for a difficult 2014 Qualifying campaign, having to face the likes of Spain and France. Head Coach Mixu Paatelainen hasn’t hid the fact that a win is top of his agenda as well.

“We have come here to get a good match in and of course we’d like to win the game. I expect the match to be a good, competitive one. We have a lot of young players in our team and so does Trinidad but we are here on business which is to be serious in our preparation and to give a good account in the game,” Paatelainen said.

T&TEC goalkeeper Marvin Phillip had just entered the Under 20 team the last time Finland were here. Since then he’s accumulated 36 appearance following a 2007 debut versus Panama and has been handed the captain’s armband  for Sunday’s affair.  The 27-year-old custodian is expecting nothing less than a  tough assignment.

“There are no easy games in international football. Finland are here because they want to get a result and they would not  have travelled this far if they were not looking to play a good game and be serious about it,” Phillip told TTFF Media after a training session on Saturday morning at the Hasely Crawford Stadium.

“But we as well have worked hard this week and even though it’s just our first friendly for the year and we are already out of the qualifiers for the World Cup, I think the boys know that a good result will help in winning back some confidence from the public.

It will also go a long way  in helping with our preparations for tournaments like the Caribbean Cup and the Gold Cup. We have a lot of work to do to get back our respect but a good game on Sunday will assist us in getting there,” he added.

De Silva, already with one international cap to his name, said the opportunity for international exposure at the senior level is something he and his fellow Olympic team partners are keen on.

“This game comes at an ideal time for those of us who are in the  Olympic squad preparing for the final round of qualifiers. For a lot of us it’s always something that we dream of when it comes to playing for the senior national team. Finland are coming out of Europe and they are exposed to a high level of football so it’s a great opportunity to test our readiness against them,” said De Silva.

“Players like myself have come into the senior squad and we’ve been welcomed nicely by the coaches and the other senior players so we’re comfortable and it’s now a matter of us keeping our composure and putting on a good performance in the match itself.”

Charles witnessed the last outing between the two teams, well aware that the starting eleven comprised several Defence Force players. This time around he’s in charge and though having an almost full home-based squad, he’s confident in their ability.

“It’s a good bunch of guys we have together. Obviously there’s always room for improvement and to see other players but this is just one game in the calendar and hopefully we can get things off to a good start which will allow us now to build our confidence for matches against other quality opponents like Finland and others in Concacaf later on in the year,” Charles said.

Tickets priced at $40 (uncovered) and $100 (covered) will be on sale at the match venue on Sunday.  Jamaican Courtney Campbell will be the referee for the encounter with Dion Neil and Ainsley Rochard of T&T serving as his assistants.

Finland head coach Mixu Paatelainen says he  expects to get a decent work out from Trinidad and Tobago in Sunday’s friendly international at the Hasely Crawford Stadium from 5pm.

Paatalainen, a former Finnish international and ex-teammate of Russell Latapy at Scottish club Hibernian, conducted two training sessions on Friday at the Larry Gomes Stadium and is looking forward to the encounter with high expectations of a good workout for his squad.

“We’re definitely looking forward to the match. We didn’t just come here without thinking about our plans and of course our selection of opponent is based on quality. We know Trinidad and Tobago has strong, athletic and also quick players and they’ve been to a World Cup which is a great feat.So yes I’m looking forward to a good competitive match on Sunday,” Paatalainen told TTFF Media on Friday.

“We have a lot of good young players in the squad for Sunday including some local-based players and a few others from outside of Finland like places like Sweden and Norway.

So far our preparations have gone pretty well. Obviously it’s a lot hotter here than it is for us back at home but we’re out here for our winter-break training and we’ll be making the most of it,” he added.

The ex-boss of Scottish club Kilmarnock is also bracing for two tough World Cup qualifying opponents later this year in Spain and France.

“We’ve never been to a World Cup before but we have a good bunch of players who are willing to work hard and very eager to do well.

That’s encouraging for me and we’ll prepare as best and work as hard as possible to get ready for those games. From Trinidad we’ll head off for another friendly against Austria. Generally we want to be as strong as possible in these friendlies starting with the one on Sunday versus Trinidad, “ Paatelainen added.

T&T meantime, trained on Friday morning coaches Hutson Charles and Angus Eve will conduct another session on Saturday morning at Hasely  Crawford Stadium where tickets will be sold on matchday at $40 (uncovered) and $100 (covered).

“We know this is a friendly international and once you play teams like these from Europe then you are sure they will not be easy to play. At the same time we don’t intend to be pushed over easily.

We know we are in a rebuilding phase and the coaches are looking at different players but we as players also know how important it is to perform well and get a good result on the day,” Leon added.

The T&T Under 23 team meantime will commence a training camp in Tobago from Sunday for their match against Finland at the Dwight Yorke Stadium on Wednesday from 6pm.

For Trinidad and Tobago, today's friendly international against Finland from 5 p.m. at the Hasely Crawford Stadium should give some indication of what their short-term future will hold.

A new-look T&T squad will face the Scandinavians in their first outing since this country crashed out of 2014 World Cup qualifying in the first round in November, after away losses to Bermuda and Guyana.

For now, there are only questions about the future of Trinidad and Tobago football following disastrous performances on the field and numerous scandals and controversies off it. But interim coach Hutson Charles' men, also guided by Angus Eve, have a long way to go to renew public confidence in the "Soca Warriors".

The youthful T&T squad, which also has its fair share of experience, is a blend of previous senior national players infused with Under-23 players and Pro League talent. They will be led on the field by new captain, T&TEC goalkeeper Marvin Phillip.

Charles has already hinted at a no-nonsense, hard-working approach with T&T's own soca-style flair and their few training sessions have already shown some encouraging signs. But today will be a test of the mettle and potential of a squad named less than two weeks ago.

Phillips is expecting a tough match from the visitors.

"Finland are here because they want to get a result and they would not have travelled this far if they were not looking to play a good game and be serious about it," Phillip told TTFF media officer Shaun Fuentes at yesterday's training session at the match venue.

According to Phillip, who has 36 international caps, the Trinidad and Tobago players are motivated for the match despite being out of World Cup qualifying. The upcoming Caribbean Football Union Digicel Cup campaign later this year is their first major target and they are also hoping to win some favour with the home crowd.

"I think the boys know that a good result will help in winning back some confidence from the public," the 27-year-old custodian said. "It will also go a long way in helping with our preparations for tournaments like the (Digicel) Caribbean Cup and the (CONCACAF) Gold Cup. We have a lot of work to do to get back our respect but a good game on Sunday will assist us in getting there."

On the other side of the field, Finland are looking to get a good "workout" from the T&T fixture before they head to Austria for another series of friendlies.

"We have come here to get a good match in and of course we'd like to win the game," said Finnish coach Mixu Paatelainen, who is a former teammate of ex-T&T coach Russell Latapy at Scottish club Hibernian.

"I expect the match to be a good, competitive one. We have a lot of young players in our team and so does Trinidad but we are here on business which is to be serious in our preparation and to give a good account in the game," the former Finland striker added.

Given T&T's recent woes, the head-to-head profile between the teams may count for little in predicting today's result.

In five matches, all played in T&T, the teams have won two each and drawn the other. The latest was a 2-1 Finland win at the Hasely Crawford Stadium in 2003.

Still, a confident showing by Trinidad and Tobago may just go a long way towards convincing fans that T&T football does, at least, have some hope going forward.