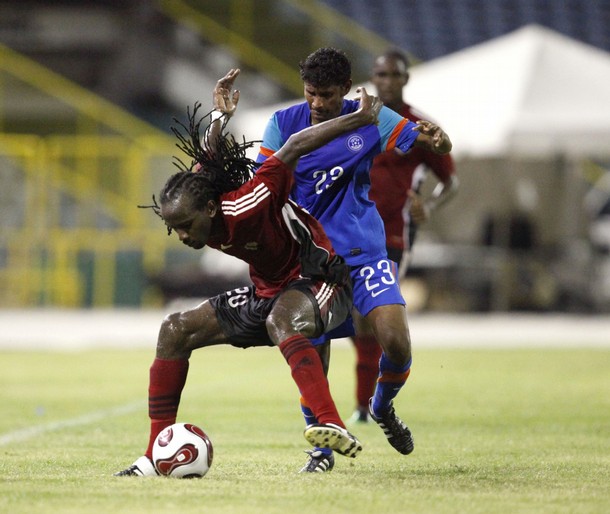 Former national defenders Dennis Lawrence and Marvin Andrews were dubbed the “Twin Towers” whenever they stepped onto the pitch for T&T.

They cemented the positions of centre-backs, appearing consistently for well over six years. Following the 2006 World Cup campaign, the two were reacquainted during the 2010 campaign.

And while for some time, T&T has found it difficult to find players to fill their shoes, the current duo of Seon Power and Carlyle Mitchell have shown potential.

Mitchell is attached to MLS club Vancouver Whitecaps while Power has caught the attention of a couple overseas clubs in Asia.

The latter, a former Joe Public man, was particularly good in T&T’s recent Caribbean Cup qualifiers, scoring in the 3-0 win over Suriname at the Dwight Yorke Stadium in Bacolet, Tobago on the weekend.

Holding on to his starting spot in the T&T team is just one of his ambitions.

“I want to keep playing for the national team but I would like to play overseas before my career is over,” Power said.

“I understand the game and my position at the back a lot better than previous years. I know it takes a lot of hard work and dedication and I’ll like to urge players, especially the younger ones to realise how important it is to take the game and their training more seriously.

“I grew up watching the likes of Dennis and Marvin and I’d like to go down as one of the players who did well in defense for the country as well,” said the North East Stars player, who has 35 appearances for T&T after making his debut at age 22.

Power played in the 2007 Concacaf Gold Cup, T&T’s last appearance at that tournament and was also in the squad that finished runners-up at the 2007 Caribbean Cup Finals which T&T lost 2-1 to Haiti in the Final.

“All of us in the team want to play in the Gold Cup. We want to take the team back to that level. But personally I will like to get to the Caribbean Cup final and win it this time. We will meet Haiti in the opening game next month and a win will be a perfect start to getting back to a level I think we should be playing at,” Power added.