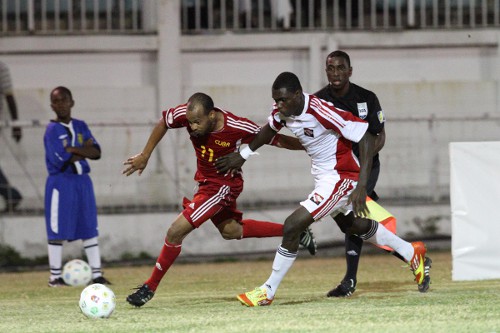 Some of this country’s home-based players who made up the national team that came second at the Caribbean Cup finals last year, are counting down the hours to Wednesday’s friendly international against Peru, eager to line up in front of the home fans for the first time since qualifying for the 2013 Concacaf Gold Cup.

The squad, under head coaches Hutson Charles and Jamaal Shabazz will assemble at the Cascadia Hotel on Sunday and will train at the Ato Boldon Stadium, Couva, for the clash which is being put on with support from the Ministry of Tourism and the Ministry of Sport.

With the likes of Kenwyne Jones and Carlos Edwards spearheading the overseas-based players recalled for the match, some of the players based in the T&T Pro League were instrumental in getting T&T to the Gold Cup, its first qualification since 2007.

Defender Aubrey David is anticipating the test from the South Americans. “We felt good playing and doing fairly well in Antigua and throughout the Caribbean Cup but the best times is being able to play in front of the home fans. We are excited and eager to play for them and hopefully do well against a team like Peru,” David said.

“It’s going to be a stern test but I think we will handle ourselves and put on a good show.” Caledonia AIA midfielder Ataullah Guerra, who scored the winning penalty in T&T’s victory over Martinique in the Caribbean Cup semifinals in December, is coming off a trial in Turkey where he was accompanied by Densill Theobald.

Guerra was impressive in the Tobago-leg of the Caribbean Cup semifinals. But now he’s hoping to do just as well on Trinidad soil. “This is where I play my club football and there won’t be a greater feeling like wearing the national shirt against a team like Peru at the Ato Boldon Stadium. We are up for the match.

“We want to play well and see how good we can do against a South American side like Peru. I’m very anxious. I just want to put out my best,” Guerra said.

W Connection defender Daneil Cyrus, a past member of two T&T youth teams that played at World Youth Cups, knows that Peru’s attacking force that includes the likes of Bayern Munich striker Claudio Pizarro and Schalke’s Jefferson Farfan, will be a real handful for the T&T defence.

“These are players that play every week in Europe and we know what they can do. But I think our team will be ready. Hopefully, the local players with the foreign guys coming back can prove to be a good combination.

“We would love to get a good result but Peru will be coming hard also. The main thing is for us to play as a team and use this game to prepare ourselves for the Gold Cup,” Cyrus added.

Tickets ($100) for the match which kicks off at 8 pm are on sale at Kenny’s Sport Shops, Sports and Games and Ramsingh’s Sportsworld in Couva.