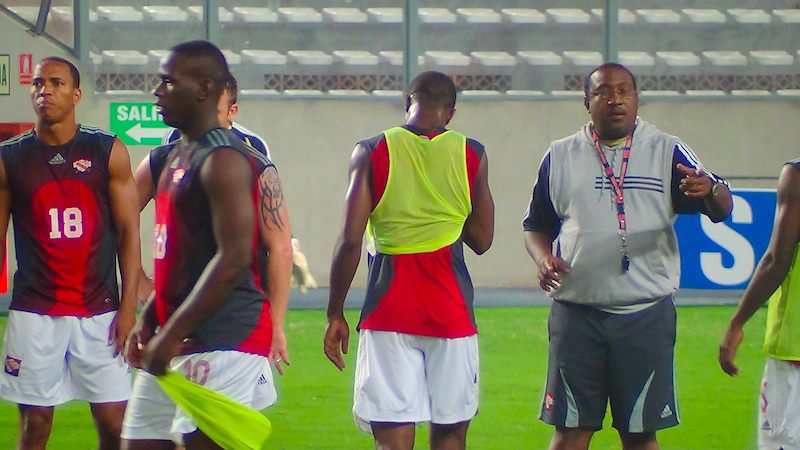 Trinidad and Tobago’s senior men’s team will face another stern test on the road when they come up against a confident Peru outfit in Tuesday’s friendly international at the Estadio Nacional (National Stadium) in Lima from 9pm (10pm T&T time).

Peru, which defeated T&T 2-0 at the Ato Boldon Stadium last month, is on a high at the moment following their 1-0 victory over Chile at the Lima venue on Friday, a win that kept their hopes alive for 2014 World Cup qualification. The victory pushed them to 11 points ahead of Bolivia and Paraguay but still trailing six teams including leaders Argentina, Colombia and Ecuador.

Head coach Sergio Markarian will use the encounter to have a look at some of his fringe players with the likes of Bayern Munich striker Claudio Pizarro, Rinaldo Cruzado and Juan Manuel Vargas being excused and already having returned to their clubs.

“It was a great result against Chile and now we will play the team of Trinidad and Tobago again on Tuesday. This team we faced already but the game will be of significance but we use it again as preparation for the future,” Markarian said.

“Some players will get the opportunity to play and I think the match will be a good one and is one that can be very useful.”

The surface at the National Stadium here is impeccable and the 40,000 seater venue is expected to have a decent turn out. But  the T&T coaching staff is also wary of the fact that the encounter could prove to be a tough one away to a South American opponent that is on a high.

The long travel of the T&T team from Belize to Peru via Miami in such close proximity to the match is also a factor that cannot easily be overlooked. The second batch of players and staff arrived in Lima at 4am and checked into the Sheraton Hotel about an hour after while the earlier group arrived at 2am.

“This will probably be the biggest test for us not just since the Caribbean Cup but also for almost two years. The environment and playing an opponent like Peru in their own backyard is going to be tough. But these are the games we want to be playing every month if we can,” Charles told TTFF Media on Monday.

“Our squad is also very eager to do well. The players know of the importance of good competition and we must keep in mind that our focus is the Gold Cup in July. Yes we want a good result but more importantly we want to see the physical readiness and how we deal with a team like Peru tactical wise.

And if the conditions are difficult, we need to see how the team handles such situations. This can hopefully make us a stronger unit,” Charles added.

“For a lot of the  players here it will be the first time they will play an international game at the senior level like this one. And they are all very eager to take the pitch. And with the experience of players likely myself, Chris Birchall, Cornell Glen and Kenwyne can help in the overall effort as we try to get the team’s performance to a good level for the Gold Cup,” Theobald added.

Charles said he was happy with the performance of Birchall and wants to see the same effort from some of the other faces.

“Chris did well and I was impressed with him in terms of his effort and his spirit. This is what we will like to see from some of the other players… that desire and appetite to do well for country.

The team needs to get all the support off the field also and we know it’s not been smooth sailing but hopefully we can get it all together for the benefit of everyone involved and that the stakeholders can see the importance of it.”