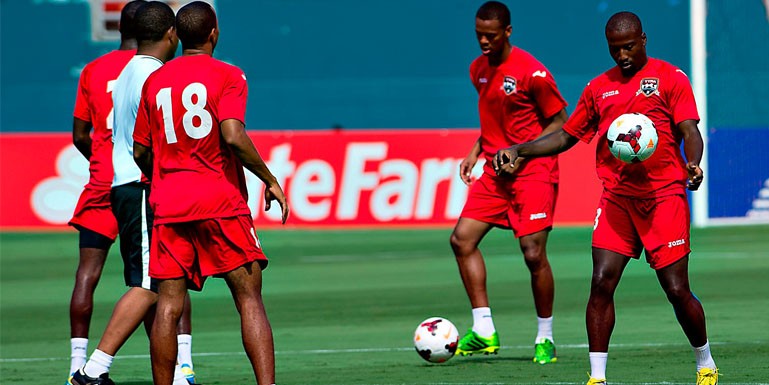 T&T’s senior footballers will have their first feel of the Georgia Dome this evening ahead of tomorrow’s Concacaf Gold Cup quarterfinal affair with two-time defending champions Mexico.

The Stephen Hart-coached “Soca Warriors” have had two sessions so far in Atlanta at the Emory University Ground, located 15 minutes away from the Westin Plaza Hotel.

It is primarily the home stadium for the NFL’s Atlanta Falcons and the NCAA’s Georgia State Panthers football team. It was the largest domed structure in the world until 1999, when London’s Millennium Dome was completed. With a capacity of more than 71,000, the Georgia Dome has hosted football matches involving Manchester City, AC Milan, Mexico and Venezuela.

“We’re excited about the quarterfinal itself and playing at the venue is something all the guys are looking forward to,” said T&T skipper Densill Theobald.

“This whole experience is massive for us. We feel privileged to have reached the quarter finals of the Gold Cup and I think the boys are really up for it right now. Mexico will be tough to overcome but we intend to be tough opponents as well,” said the Caledonia AIA midfielder.

Columbus Crew midfielder Kevan George, a replacement for Khaleem Hyland, joined the team camp on Wednesday night and was part of the yesterday’s training, while Middlesbrough defender Justin Hoyte has resumed light training.

“There are a couple guys with knocks but nothing serious. Of course we’ll be without Justin but he will be ready for the semifinals once we progress,” said Hart.

“We have young Kevan George joining the squad as a replacement for Khaleem and so far the mood and the attitude of everyone has been very good. Everyone is embracing this experience and it will serve us well as team going forward. The match itself on Saturday is a big assignment but these are matches you always anticipate at this level and we’ll be preparing just as well for it,” Hart added.

Mexico, the runner up in Group A, is in action on Saturday when it faces the runners-up of Group B, T&T, at the Georgia Dome. Mexico is a clear favourite according to odds released by the Las Vegas Hilton Superbook. The early fixture on Saturday is between Panama and Cuba.

The United States is a large favourite to beat El Salvador and advance into the semifinals of the Concacaf Gold Cup.

Leo Beenhakker talks to Fox Soccer in Atlanta ahead of Mexico Clash.

Warriors Work Out in Atlanta.