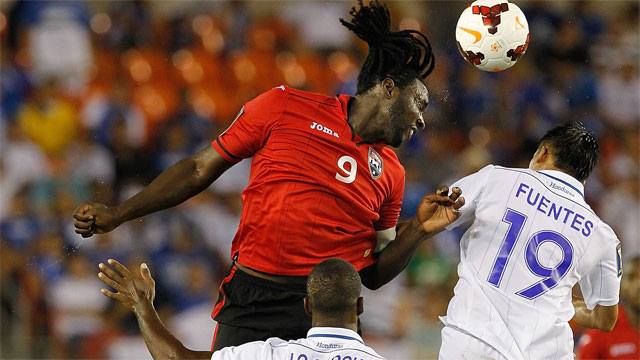 Two Joneses and a Winchester. It sounds more the title of an old TV Western than the sum of football for the 2013 season. But these are the characters that stood out in 2013 – a year when Trinidad and Tobago football made some strides at the national level.

Kenwyne Jones, Joevin Jones and Rundell Winchester all excelled at some level in 2013, and probably provided the most noteworthy performances during the year. Notable mention could of course be made of Finland-based Rovaniemen Palloseura midfielder Ataullah Guerra, who scored in consecutive international victories over Jamaica, and the English-born pair of Justin Hoyte and Andre Boucaud, who gave the national team a definite lift.

Kenwyne Jones:
Like him or not, Stoke City striker Kenwyne Jones has been good for Trinidad and Tobago in 2013. Jones seems to be maturing in his football old age, like Dwight Yorke, who captained T&T at the 2006 World Cup. In his prime, Yorke seemed to view trips home for international matches as as a holiday rather than a chance to play for his country. But late in his career, Yorke matured into a good captain during the lead up to World Cup qualification.

Jones’ former English coach and Southampton manager Harry Redknapp hinted at the T&T striker being lazy. In his autobiography, Redknapp said Jones had all the tools, a great spring, good pace and power in the air, but was “laid-back to the point of semi-consciousness”.

“We got our first shock in preseason training when we did a beep test and Kenwyne was beaten by my assistant Kevin Bond. He just pulled up, like a tired old racehorse. ‘Keep going, Kenwyne, what have you stopped for?’ I shouted. ‘I’m tired, man,’ he said. ‘I know, Kenwyne,’ I replied. ‘That’s the point of it. We have to find out how fit you are when you are tired.”

Not surprising, really. The real surprise was a new-found vigour by Jones, who led Trinidad and Tobago by example at the CONCACAF Gold Cup in July. Jones fought hard for the ball and his country, scored a few goals, and inspired his players as well. Jones has been both a success and disappointment to local football fans. He has been a fair success in the toughest league in the world, the English Premier League, but he has disappointed many times by failing to distinguish himself from ordinary players from Bermuda, Guyana, Grenada and so on.

However, in 2013, Jones stepped up against El Salvador and Honduras at the CONCACAF Gold Cup where T&T claimed a rare quarter-final spot. The Soca Warriors also finished a credible third at the OSN Cup in the Middle East, drawing 3-3 with winners United Arab Emirates, before losing on penalty kicks, and also beat hosts Saudi Arabia (3-1).

The year ended with a 0-0 result against World Cup hopefuls New Zealand, and memorable back-to-back victories against fiercest Caribbean rivals, the Reggae Boyz. The Soca Warriors ended December 2013 as the top-ranked Caribbean team, moving past Cuba and Jamaica.

Joevin Jones:
Everyone thinks Joevin Jones is a future star. The son of former national defender Kelvin Jones is a scoring midfielder, that can play up front or in defense. He has a wonderful left football, and shoots powerfully from distance. He has the talent and the skillset to become a top player. However, Jones has not yet landed a big overseas contract following trials with Toronto FC, Colorado Rapids and most recently Italy’s Udinese.

Maybe his lean body structure does not appeal to international football managers. It is more likely that 21 year-old Jones may need to develop the desire and pitbull attitude that lets everyone know that he is the best – not just in Trinidad and Tobago. That, and a more mature attitude; he was dropped briefly by W Connection after he and Daneil Cyrus were caught playing in a minor league, and national coach Stephen Hart voiced the need for both those players to prove themselves, as they also spent some time on the sidelines for the national team.

Jones has to do it for the national team, against Jamaica, El Salvador or whoever they face.

Hart obviously sees Jones’ potential, and wants him to come out of his shell. Jones is an exciting prospect, but does not seem to yet have the same confidence in a Trinidad and Tobago shirt. Hart wants Jones to be as bold a player for T&T as he is with his local club W Connection, where he is the main man.

“Joevin has a lot of quality and it’s no good if he’s an arbitrary passer of the ball,” Hart said following a 2-0 win over Jamaica on November 19. “He has to pick up and make things happen. That’s what football is about.”

Rundell Winchester:
Rundell Winchester can still walk the street without many people knowing who he is. But, now that his Pro League opponents know him, life is becoming harder for the Tobago striker, who turned 20 earlier this month. Few knew Winchester prior to December 2012 when he was playing for Stokely Vale in relative obscurity. It was their run in the 2012 FA Trophy competition that alerted the media and Central FC coach Terry Fenwick to Winchester’s promise. He along with teammate Darren Mitchell both transferred to the Pro League.

Winchester has a sprinter’s speed – his greatest asset. He is technically good and can also score spectacularly with either feet. Winchester’s 2013 First Citizens Cup winner against Defence Force must have caught the eye of the national coach, who gave him his three national caps to date, an international friendly against New Zealand and another pair against Jamaica. Winchester is young, and green, but looks a good player for the future.

“You’ve got to remember, he is 20 years old, we have to give him time,” Hart said of Winchester, who won the penalty that gave T&T a second goal against Jamaica. “Rundell was kind of thrown into the deep end. The young man has some qualities. He has to learn how to bring those qualities to the team, but it is a big learning curve for him.

“Some things went wrong for him tonight, but he never hid. He wanted the ball, he took people on, he got the penalty and for me that is the making of a player for the future,” Hart said.