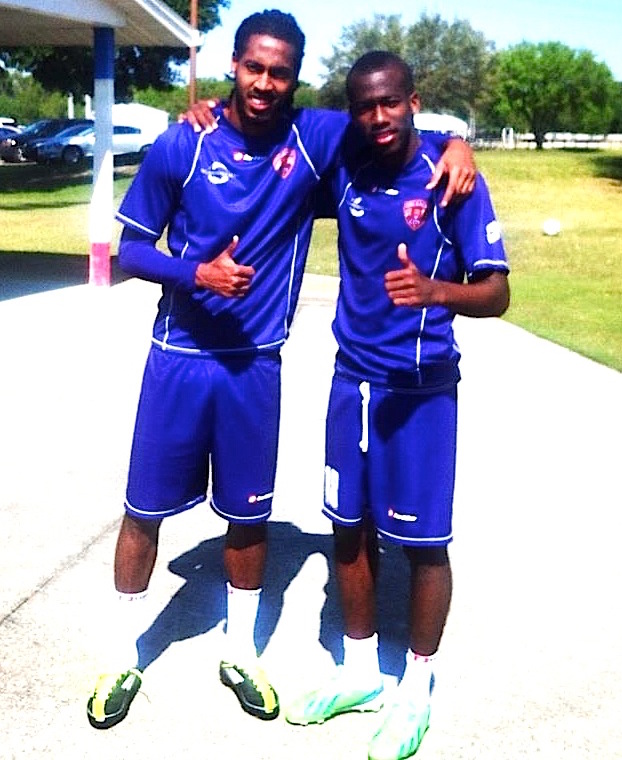 New Trinidad and Tobago call up Dwane James is the new kid on the block in the National Men’s Senior Team for next Friday’s International Friendly with Panama at the Ato Boldon Stadium.

Now attached to North East Stars, the 26-year-old centreback caught the eyes of T&T head coach Stephen Hart with his sterling performances in the T&T Pro League this season. But there is something else about James that will catch your attention. He is the brother of T&T star midfielder Kevin Molino.Both Molino and James have the same father, David Samuel. And even though neither of them carry their father’s surname, they both have the same intentions of making a name for themselves through football.“This call up is a hard work coming to fruition and a dream come true, like it would be to any player,” James told TTFA Media.“I think for all the local based playing from the Pro League who got the call from Mr Hart, it’s a big day for us. I know it’s going to be very difficult because we have to settle in quickly and try to fit into the coach’s plans but this a big opportunity for all of us. And a team like Panama is a strong opponent for us to face on our entry into international football. As players, we look forward  to occasions like this,” added the Arima-born James.On his relationship with Molino, James explained: “We have the same fathers but we carry our mother’s surnames. But football is in our blood. He always encourages me and I’ve encouraged him as an older brother also. When he heard that I got called, he was very happy.We spoke this week and he told me to keep working hard and don’t settle for just being selected. He said this was an opportunity for me to improve my level of play and my career as a footballer. I think we’re both very excited about this and the hard work continues now,” he stated.James has had stints with US clubs Orlando City, Sporting Kansas and Atlanta Silverbacks. While on trial with Kansas along with T&T defender Daneil Cyrus, James scored in a Reserve Match against Chicago Fire in 2011.Molino in return said James has to accelerate his work rate now that he has gotten the nod from Hart.“He’s a hard worker and he’ got his chance. But now he has to work even harder to take advantage of this opportunity. It’s great for any player to earn their first call up to the national team. But Dwane and the other guys who have earned selection have to realize this hard work has only now begun for them,” Molino told TTFA Media.James will join the T&T squad this weekend for the start of training ahead of Friday’s friendly international versus Panama. The Panamanians which will also play Costa Rica in another friendly following the T&T clash, will arrive in Port of Spain on Wednesday.T&T European-based duo Khaleem Hyland and Sheldon Bateau are expected in the country today and will be joined on the weekend by Justin Hoyte and Molino.Panama meantime, are coming with a full strength team for the encounter. Among the players called up include German-based midfielder Armando Cooper of FC St Pauli, veteran forward Luis Tejada of Peruvian club Juan Aurich who is the team’s leading goalscorer with 37 goals in 79 matches, Colombian-based defender Harold Cummings, FC Dallas forward Blas Perez, LA Galaxy goalkeeper Jaime Penedo and another experienced  defender Luis Henriquez of Polish club Lech Poznan. The Panama team comprised players based in Germany, Poland, Hungary Mexico, USA, Peru, Uruguay, Colombia, Venezuela, Guatemala, Costa Rica and Panama.Tickets for Friday’s match cost $100 and are available at Fan Club Movietowne (POS, Trincity Mall, Gulf City Mall), All Out Restaurant (QP Oval), Heritage Sports Tobago, Ramsingh's Sportsworld, Couva, Econo Supermart and Kenny's Sports Shops.