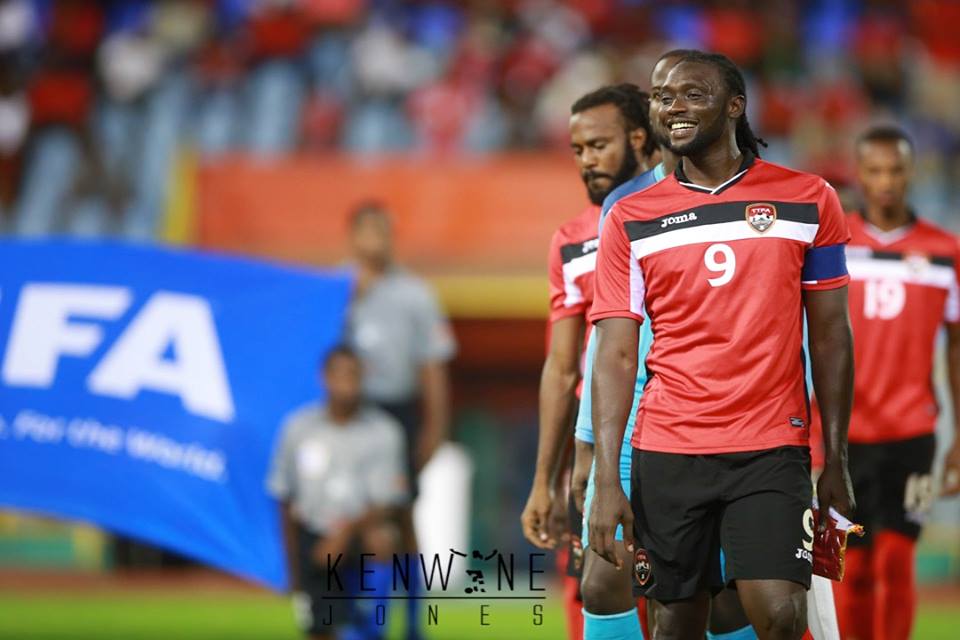 Soca Warriors captain is expected to be available for this country’s opening match of the Concacaf Semi-final Round Group C World Cup qualifier away to Guatemala on November 13.

This after the 31-year-old Jones of Cardiff City avoided serious injury in a collision with Nicaraguan goalkeeper Justo Collado during their international friendly encounter at the Hasely Crawford Stadium, Mucurapo, on Tuesday night, which ended 0-0.

The injury occurred in the 61st minute when Jones, who was on target in the 2-1 win away to Panama a week ago in Panama City, tried to latch onto a through pass from Keron Cummings but collided with Collado.

Following treatment on the field by the Soca Warriors medical staff, Jones was stretchered off and taken to St Clair Medical Centre for observation and after being examined by doctors, the T&T Football Association stated that X-rays on the English-based striker indicated that he suffered no bone damage.

Team Doctor Israel Dowlat stated that Jones sustained soft tissue injury to the left lower leg and was presently non-weight bearing with crutches and is on anti inflammatory medication, and should be able to take the field again in at least two weeks.

Soca Warriors Stephen Hart said he was please with his team’s second-half display in a 0-0 draw with Nicaragua.

The drawn result extended the team’s unbeaten run in regulation-time matches to seven matches, since a 3-0 loss away to Jordan on the eve of the CONCACAF Gold Cup, where T&T’s only loss came at the quarterfinal stage, 6-5 on sudden-death penalties to Panama after a 1-1 draw.

Speaking after the match, Hart said, “I think we were a bit too lethargic in the first half, and maybe its because we went too hard in training with long sessions or maybe it was the fact that we were playing at home. But the way they played the second-half you will have to question that as well. So it could be just the nerves of playing the game at home after a long time.

“But I was really really pleased with the second-half. I thought we just took over the game and Nicaragua realised that and decided to break the whole rhythm of the game and killed the game.

Questioned as to how his players can deal with the rough tactics of Central Americans teams, Hart said his players could not do anything about it against Panama or Nicaragua but hoped the referee would have taken charge of the match.

He said, “Kenwyne was down on the floor for seven minutes, and they had six minutes overtime, and ok it’s just an exhibition game so I’m not really worried about that, but its just frustrating.

“The amount of time they (Nicaragua) went down, I mean every time they went down, they kept calling for the stretcher, so it just killed the whole second-half because they realised it was just a matter of time before we probably scored.”

Asked what he would like to take from the contest into the opening home match against USA in the Concacaf World Cup qualifiers Hart said, “In the second-half when we put the ball on the ground or moved it with a shorter quicker speed and got the wider players involved I thought that made all the difference and if you look at the amount of crosses we got in and our penetration we got from the right side and the shots on goal we had I was quite please with that.”

With just under a month before T&T plays away to Guatemala in its 2018 World Cup qualifying opener before meeting USA at home four days later, Hart, when asked what areas of his teams he will need to improve first, noted that he already has in his head his final squad but noted he doesn’t have the team until we get together again in November.

“I mean Aikim Andrews came on and gave us some good penetration, Cyrus got into some good positions to deliver crosses and he did so, and Joevin came to life in this game after he was a little sluggish in the Panama game.

“Sometimes the game goes that way, but it wasn’t for the lack of us playing football, its just one of those games.

Look at the opening seven minutes of the match where we had three chances out of one chance to score, but it just did not go in.”

Commenting on his opponents, a former Canada national team coach Hart stated that Nicaragua is a nice team and moved the ball well while not too dissimilar to Guatemala.

“They are not a team that is going to physically run with you, but they try to play among you and past you and I thought we handled it well, and I am not sure how many shots they had on goal as well.”

Looking ahead to the USA match and the tough patch they have endured, four straight defeats, Hart said it’s a problem for their coach, former Germany World Cup winner, Jurgen Klinsman.

“But I think USA will always be a formidable team. They will play with power and strength, and will look to physically beat up on you with a lot of hard running , but right now my thoughts are just with Guatemala.”