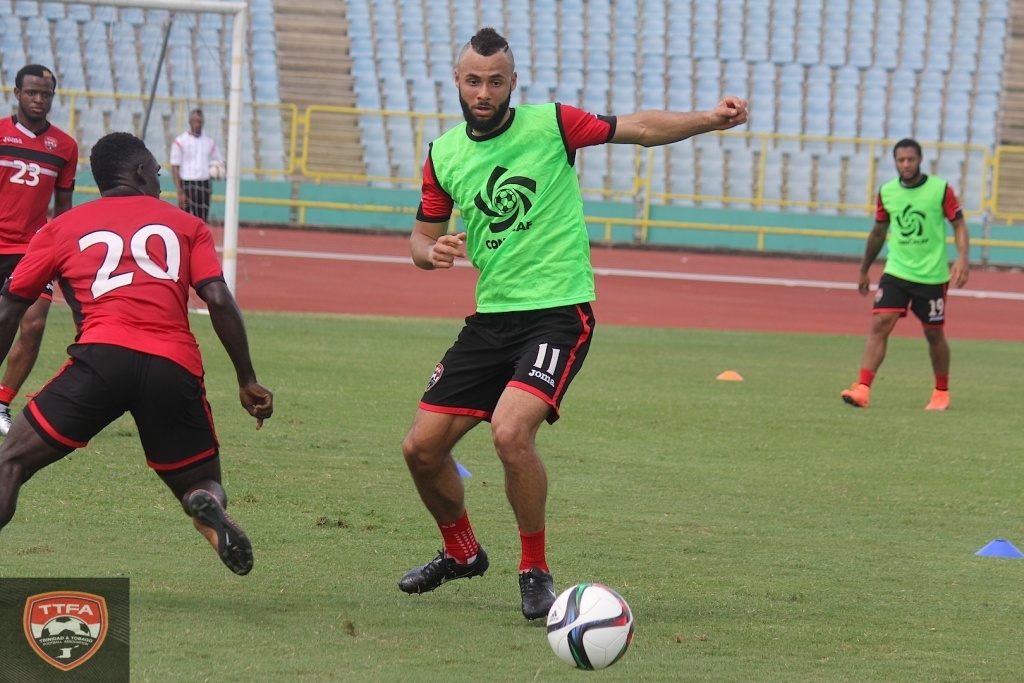 English-born midfielder John Bostock got his first feel of local soil with his new Trinidad and Tobago teammates on Monday morning as the Soca Warriors kick started their final training camp head of Friday’s 2018 World Cup qualifier against St Vincent/Grenadines in Kingstown.

Bostock touched down in Port of Spain on Sunday night joined the rest of the T&T squad for a 9am session at the Hasely Crawford Stadium. Head Coach Stephen Hart welcomed him along with captain Kenwyne Jones and English-based duo Justin Hoyte and Andre Boucaud as well as newly signed Charleston Battery midfielder Neveal Hackshaw, Trevin Caesar, Khaleem Hyland and Orlando City midfielder Kevin Molino who appeared in his first full national team practice since his dreadful knee surgery just around a year ago.

“It’s great to finally be here in Trinidad and Tobago and to get in my first session with the rest of the national squad. I’m quite excited about it and now it’s just about getting on with the preparations for the game on Friday. The conditions are quite hot but good all the same. I’m just really looking forward to settling in and making a positive contribution,” Bostock said after the session. His father, also named John, is Trinidad and Tobago-born from Diego Martin.

Some of the other overseas-based players carded to come in by Tuesday include Seattle Sounders midfielder Joevin Jones as well as Dutch-based Levi Garcia and Russian-based defender Sheldon Bateau, Mekeil Williams, Willis Plaza, Yohance Marshall and Aubrey David.

“Today’s first session was just to get the players settled in and get the legs going a bit. We’ll settle into full stride once everyone’s here. Of course it was good to welcome Bostock into the squad and this was also Molino’s return to the team,” Hart said.

The home-based pros including Sean De Silva, Shahdon Winchester, Jomal Williams, Hughtun Hector and goalkeepers Marvin Phillip and Adrian Foncette all took part in the session and Keron Cummings, showed up in good spirits as he continues recovery from a gunshot wound. Cummings was able to juggle the football as he spoke to teammates at the venue.

Dagenham & Redbridge midfielder Andre Boucaud spoke about the importance of the few days leading up to the match on Friday which will kick off at 3:30pm at the Arnos Vale Recreation Ground.

“We had a short, sharp session this morning which was quite good especially for myself and a few of the boys who just came in from Europe and other parts. I’ve been looking forward to this a lot and speaking to the boys over the past few weeks. I think once we can take what we had from the Guatemala and USA games into Friday’s match then we should be okay. But the conditions are going to be rough in St Vincent and we are expecting that. Concentration for the entire match will be key to us getting the three points.

“It’s also good to see some of the new faces around and also guys like Molino back in it. As a squad I think we are looking very good. Obviously there a couple guys missing out with injury but we have some good back ups and we’ll be looking to take care of business,” Boucaud added.