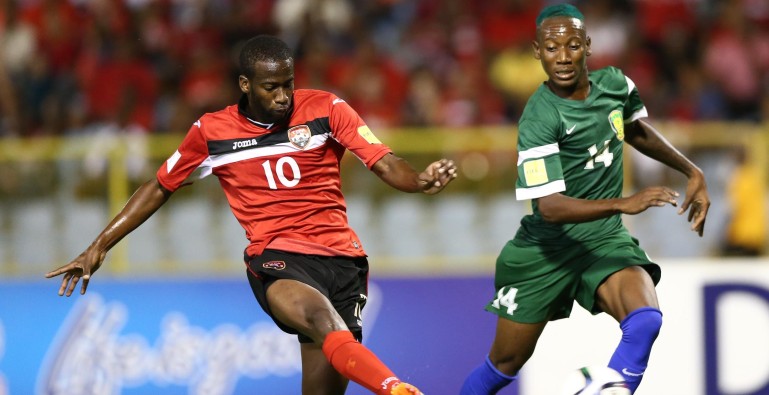 Trinidad and Tobago US-based midfielder Kevin Molino is eagerly awaiting the chance to run out against Guatemala in what will be his first match against the Central Americans in thirty senior international appearances.

Molino missed T&T’s 3-1 and 2-1 victories over Guatemala at the 2015 CONCACAF Gold Cup as well as the previous semi-final round World Cup qualifier last November due to injury. But the 26-year-old Orlando City midfielder is hoping to get the nod for this encounter from T&T head coach Stephen Hart and is planning to launch his assault on Carlos Ruiz and his men on September 2nd at the Hasely Crawford Stadium.

“I’m very excited about this match, very pumped up and ready for it,” Molino told TTFA Media.

“I know the boys are all focusing on this one because we all know what is at stake and we know what is needed in order for us to take care of business. Personally, I am staying calm but I also want to be involved and do my part because I’ve never played against Guatemala at the senior level. I watched the two games on television while I was recovering from surgery and I believe that while the game will not be easy, we have all the necessary tools to handle them at home,” Molino added.

The Carenage-born player is hoping that T&T will be firing on all cylinders on September 2nd.

“Definitely we need everyone to be on top of their game. Coach Hart knows what he wants and he knows what it will take to get us the result to have us qualified for the final round. Most if not all the players are in top gear at the moment and looking forward to these two matches. The coach will know who he wants in his squad to get the job done for us,” added Molino who has 12 goals in 32 matches for T&T.

T&T head coach Hart will announce his final squad for the match on Thursday.The team will go into a live in training inside the final week before the match which kicks off at 7:06pm. Tickets for the match are currently available at Lotto Locations nationwide.