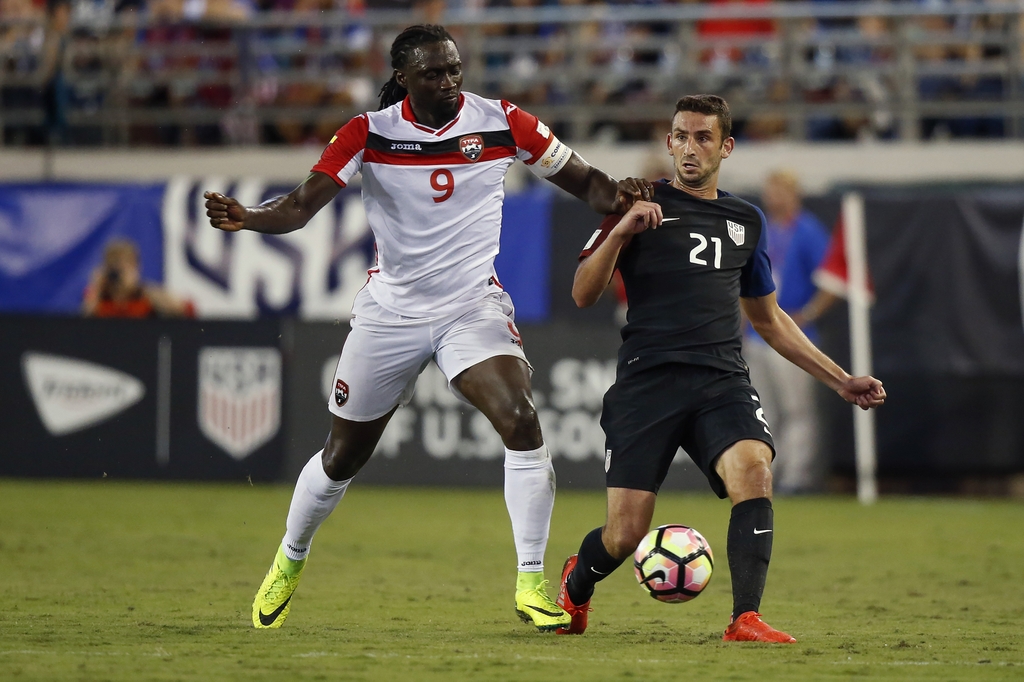 We are at home to Costa Rica on November 11th in Final Round opener.

Trinidad and Tobago’s Senior Men’s Team will commence the final round of CONCACAF World Cup qualification at home to Costa Rica on Friday November 11th for what promises to be a strenuous and brutal Hexagonal campaign for the “Warriors” in the final phase of their journey to the Russia 2018 World Cup finals.

This opening match was determined after Kenwyne Jones and his teammates stuttered in their closing semi-final round encounter, losing 4-0 to the United States at the EverBank Field in Jacksonville, Florida on Wednesday night.

Following a solid and disciplined display in the first half with at least 200 T&T fans looking on with a rhythm section positioned in the top corner of T&T’s half of the field at the start, the “Warriors” dropped their guards and stumbled against a more clinical and organised US outfit which saw 17-year-old Borussia Dortmund midfielder Christian Pulisic become the youngest player to start for the US in a World Cup qualifier. The number 10 would go on to be at the heart of the US team with an impressive performance on the evening.

T&T started without the suspended defender Sheldon Bateau and Cordell Cato was left on the bench after picking up a slight hamstring problem in the 2-2 draw with Guatemala on Friday. Coming into the starting team was Levi Garcia, Aubrey David and Radanfah Abu Bakr.

With the Americans pushing forward, Pulisic almost opened his team’s account from a Altidore cross, but his left-footed shot from close range hit both posts before bouncing away from danger.

As T&T kept the hosts under control for the majority of the half, they then fell behind after an unfortunate mishap in the box when Khaleem Hyland’s clearance bounced off his own teammate perfectly into the path of Sacha Kljestan and he made no mistake blasting into the goal.

The game began to stretch out as the second half progressed and both teams saw counter-attacking chances go begging.

Altidore put USA 2-0 ahead when he collected from Fabian Johnson before turning and placing the ball past Marvin Phillip who would later make a couple good stops to deny the Americans.

Kenwyne Jones got free in the US area after some nice build-up play from T&T, but his effort from close range went well over an onrushing Howard’s crossbar in the 55th.

Hart put on Jomal Williams and Shahdon Winchester in the second half but T&T could not get on the scoresheet. Joevin Jones tested Howard with a powerful left footer which had the ‘keeper stretching full length to push out.

The US pressed for further items as T&T were found opened too often at the back but the result would finish 4-0 to see the US (13 points) top the group ahead of T&T (11pts).

T&T head coach Stephen Hart later confessed that he felt T&T were disappointing in several aspects of their play.

“The reactions to this is the good thing is that we are in the hex but I was extremely disappointed tonight,” Hart told TTFA Media.

“I was very disappointed in the quality of our passing, our general lack of movement and we were second best to every ball tonight and it showed with three of the goals we gave away the ball with sloppy passing and United State were breaking with energy and numbers. And that’s the result you get when you make mistakes at this level,” Hart said.

“We were looking okay in the first half but I would not say we very good. We were’t getting any shots on net and then we gave up a sort of unfortunate goal. We made way too many errors tonight.

“We have the Caribbean Cup in October. I think I have to look very closely at the selection going into the Caribbean Cup and we have to realise that we have some soul searching to do. Tonight some of the big players would have to answer for it because our leaders tonight… far too many of them disappeared,” Hart added.

Hart reactions after 4-0 loss to United States in Jacksonville

The U.S. Men’s National Team used a brace from Jozy Altidore and goals from Sacha Kljestan and Paul Arriola to earn a hard-fought 4-0 victory against Trinidad & Tobago Tuesday night. The win propelled the MNT to the top spot in Group C of Semifinal Round CONCACAF World Cup Qualifying, as well as a berth in the Final Round beginning in November.

A dominant first half from the U.S. saw Christian Pulisic force a diving stop out of Trinidad & Tobago goalkeeper Marvin Phillip in the ninth minute, before the 17-year-old attacker incredibly careened a shot off both posts in the 31st. The first stanza also saw a clear penalty shout for a foul on Geoff Cameron inside the area, but referee Ricardo Montero Araya awarded a free kick just outside the box.

Just as it looked like the MNT would go into the break empty-handed, a nice bit of combination work between Fabian Johnson, Kljestan and Pulisic led to a failed T&T clearance before Kljestan buried inside the right post in the 44th minute.

With that goal in the bank, the floodgates opened for the MNT in the second half. Altidore would tally two goals in the 59th and 62nd minutes, with the first moving him past Clint Dempsey to become the MNT’s all-time leading scorer in World Cup Qualifying. His second of the match padded his lead at the top, giving him 16 Qualifying goals.

Just moments after entering the match, second half substitute Paul Arriola increased the lead, burying a close-range rebound off of a Pulisic effort in the 71st minute.

On the defensive side of the field, the U.S. back line kept its eighth clean sheet of the year, while Tim Howard made five saves to earn his 37th career shutout.

The win sees the U.S. finish with a 4-1-1 record and top spot in Group C of the Semifinal Round of CONCACAF Qualifying for the 2018 FIFA World Cup, setting up a home clash with Mexico to open the final round of World Cup Qualifying. The site of the Nov. 11 match vs. El Tri will be announced early next week.

Next on the Schedule: The U.S. MNT gets set for CONCACAF’s Final Round of Qualifying for the 2018 FIFA World Cup with an historic visit to take on Cuba in Havana on Friday, Oct. 7 on ESPN and Univision Networks (Time TBD). The MNT then returns home to the familiar confines of RFK Stadium in Washington, D.C. where they’ll face Oceanic Football Confederation champions, New Zealand on Tuesday, Oct. 11 at 8 p.m. ET (ESPN and Univision Networks).

USA – Sacha Kljestan (unassisted), 44th minute: Fabian Johnson began on the left, playing for Sacha Kljestan in the penalty area before returning a back heel to the left back in stride. Johnson then played for Christian Pulisic whose centering pass was heeled away by Radanfah Abu Bakr before Carlyle Mitchell took another swing. His clearance was blocked by Kljestan who quickly poked the ball in the lower, right corner. USA 1, TRI 0

USA – Jozy Altidore (Fabian Johnson) 59th minute: Fabian Johnson broke free down the left before feeding Altidore into the area. The MNT forward took a touch past his marker before firing a low shot inside the right post to double the advantage and make Altidore the MNT’s all-time leading scorer in World Cup Qualifying. USA 2, TRI 0

USA – Paul Arriola (unassisted) 71st minute: Pulisic intercepted a T&T pass in his own half and rushed upfield to the edge of the Trinidad box before laying the ball off to Jordan Morris who turned away from pressure and played the ball back to the center of the pitch for Sacha Kljestan to send it on to the feet of Jozy Altidore, who sent an incisive cross through the box for a sliding Pulisic to get a redirected shot on goal that was saved by Soca Warriors ‘keeper Marvin Phillip. The rebound fell to the onrushing Arriola who hit a one-time shot into the vacated net for his first World Cup Qualifying goal. USA 4, TRI 0 FINAL

TRI – Marvin Phillip, 9th minute: A quick transition in midfield saw Sacha Kljestan turn towards goal before laying off for Christian Pulisic on the left. The 17-year-old attacker cut inside and rifled a low, right-footed blast that deflected off a Trinidad defender before seeing goalkeeper Marvin Phillip make a diving save to push the ball out for a corner kick.

TRI – Marvin Phillip, 67th minute, 68th minute: Just moments after entering the match, Paul Arriola received a feed from Altidore on the right, cut inside and blasted an effort that saw Phillip push the ball over the post for a corner kick. Michael Bradley’s ensuing take found Kljestan open outside the box, where the MNT midfielder blasted a long-range effort that Phillip parried away in the 68th minute.

TRI – Tim Howard, 75th minute: With Trinidad continuing to look for a goal, Joevin Jones took some space about 30 yards from goal and unleashed an effort that Tim Howard pushed out to his right for a corner kick.