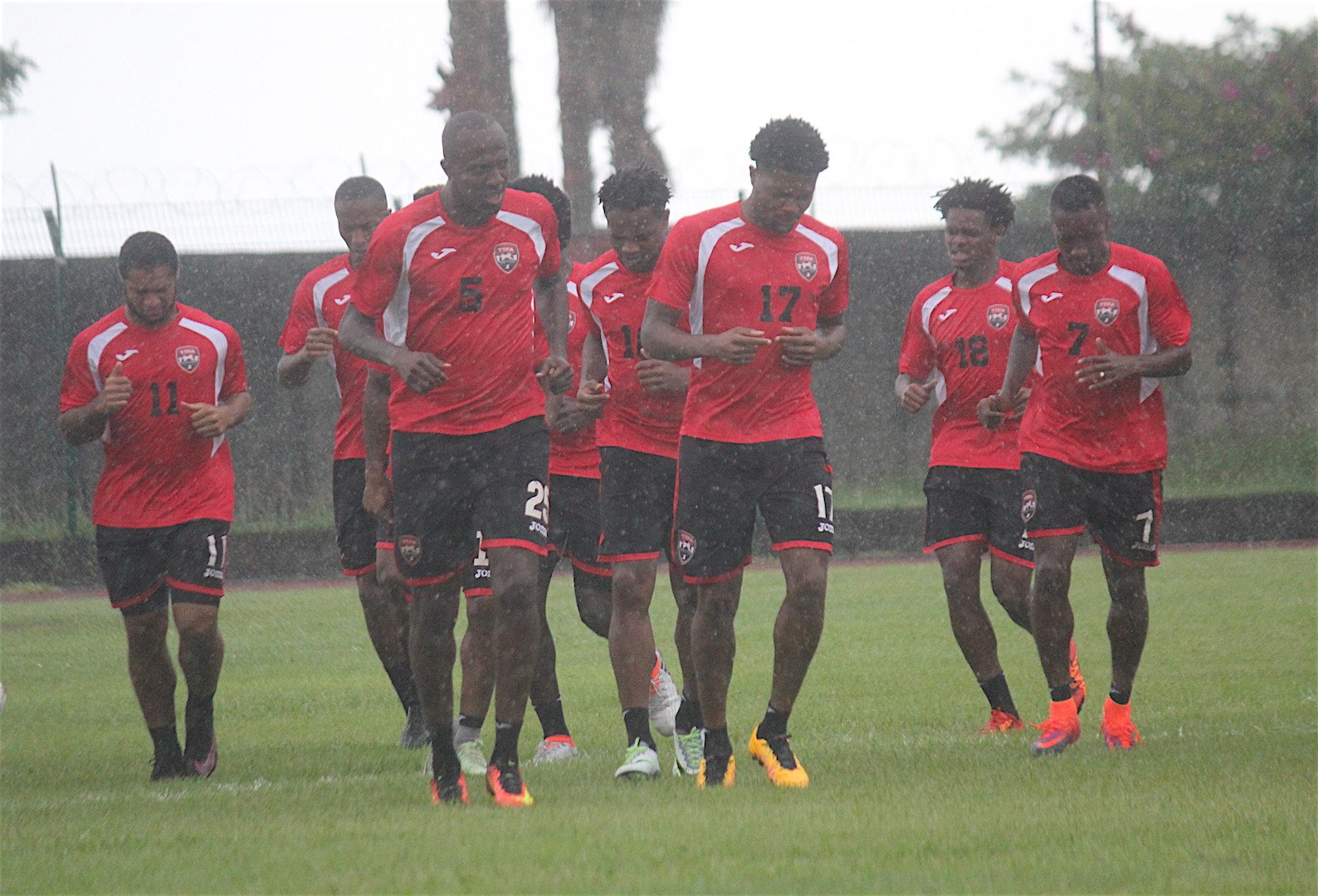 Trinidad and Tobago’s senior men’s team will be aiming to push themselves through to a third consecutive Semi-final phase of the Scotiabank Caribbean Cup as well as CONCACAF Gold Cup with an outright victory over hosts Martinique when both countries clash from 8pm on Tuesday at the Stade Pierre-Aliker in Fort-de-France.

The Stephen Hart-coached outfit trained twice at the Stade de Trenelle on a rainy Monday, with the first session lasting just under an hour during which there was torrential rainfall. The T&T squad had earlier arrived in Fort de France on Sunday night while the Martinique team returned from Santo Domingo on Monday evening following their 2-1 victory over Dominican Republic on Saturday.

The last times both teams met at this venue in a Caribbean Cup, a Hughtun Hector item gave T&T a 1-0 win in their closing group match after T&T had already lost to Cuba and Grenada, failing to advance to the Gold Cup. But T&T were victors on penalty kicks after a 1-1 stalemate in the semi finals of the 2012 Caribbean Cup in Antigua while a 2003 Gold Cup playoff qualifier between both teams in Fort De France saw the hosts coming away 3-2 winners. There certainly has been a keen rivalry between both countries over the years.

“We have no doubt that they (Martinique) will come out with the belief that they can get a result and they will come hard. Kenwyne Jones told TTFA Media “But we have to take care of our game. We know our capabilities which you would have seen being demonstrated in the game last Wednesday and I think once we do things in the right manner and we do it as a team, then there is every reason to believe we can get the result to propel us to the next phase and also the Concacaf Gold Cup,” Jones added.

Hart was not overly worried by the heavy rain conditions which meant he couldn’t do much on the eve of the encounter.

“Well yes it does give you a bit of a setback because the heavy rains caused a lot of puddles on the field this morning but we will not harp on that. The most important thing was being able to get the legs working again and then we’d see how the next session goes before the match,” Hart said.

“The players know why they are here. They’ve been to two Gold Cups in a row and they certainly want to play in a third one and we will be focusing on doing what is necessary to come out with the victory,” he added.

“There is a lot of history between the two countries and Martinique has a certain love for the game with a lot of French influence in their football. We will ensure that we try to avoid the little errors that could possibly make the game hard for us and of course take care of our chances when we get them,” Hart added.

There were two birthday boys in camp with Triston Hodge turning 22 on Sunday and goalkeeper Adrian Foncette turning 28 today (Monday).

Defender Aubrey David spoke about the team spirit, saying “The last few days have been quite valuable to us a team. We’ve had time to train and also improve different aspects of our game both on and off the field. The important thing, as all the players know, is to transfer all our positive energies onto the field. There is a bigger plan in all of this which is to qualify for a World Cup so we have in our minds how important each day is leading up to those first couple of matches against Costa Rica and Honduras next month.”

The game on Tuesday must have a winner and will therefore go into extra time and penalty kicks if needed of the scores are tied after regulation time.

Things to know about Martinique

Martinique won the Caribbean Cup in 2003

Martinique has qualified for four Concacaf Gold Cups, reaching the quarter finals in 2002, losing to Canada 6-5 on penalties and beating T&T 1-0 in the group stage of that tournament.

Twenty-eight year old forward Kevin Parsemain is their topscorer with 23 goals in 34 games. He scored to put Martinique 1-0 ahead in the first half against T&T in the 2012 Caribbean Cup semi-final.

Martinique’s national team is controlled by the Ligue de football de la Martinique, a local branch of the French Football Federation. They are an overseas department of the French Republic and as a result they are not recognised by FIFA and are not eligible for any official FIFA competitions. However they are members CONCACAF and CFU and are allowed to enter competitions held by the both organisations.

See T&T Senior Men on the Training Pitch in Martinique