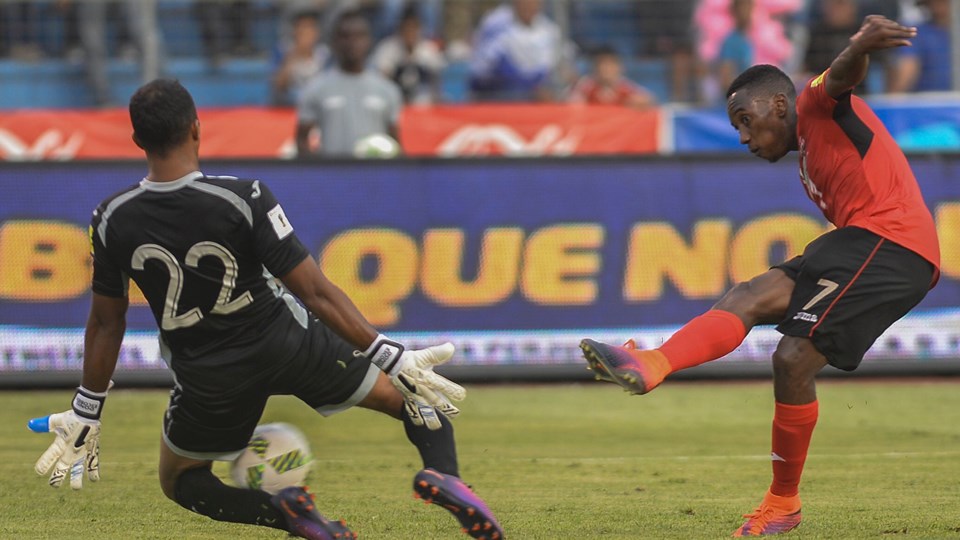 An explosive display by Honduras that culminated with a strikes by Rommel Quioto in the 16th, Emilio Izaguirre in the 19th minute and an 81st minute item from substitute Eddie Hernandez, handed T&T their second defeat in as many matches - a 3-1 result, in the Final Round of the World Cup Qualifiers yesterday at the Estadio Olimpico Metropolitano in San Pedro Sula.

T&T lost goalkeeper Jan-Michael Williams to injury early in the match as the home team sought to capitalise on a shabby T&T defence. After seven minutes Quioto’s through-ball sent Alberth Elis on his way, but he was stopped by the intervention of Williams who collided with the striker and had to be taken off.

Marvin Phillip replaced Williams but could do nothing when a neat build-up by the Hondurans found an unmarked Quioto on the left side to fire the ball into the top left corner, helped by the out-stretched arms of the goalkeeper.

Defender Carlyle Mitchell was guilty of handing Honduras their second item in the 19th minute. The central defender unwittingly tried shielding the ball, though being tightly marked by two players that included the prolific Quioto.

The stocky Honduran robbed Mitchell of the ball and beat Phillip with a powerful grounder on his near post for his team’s second goal.

The Hondurans who went down to a 1-0 defeat to Panama in their first game on Friday, were relentless in their attacks, opting to exploit the open right side where Daneil Cyrus and Cordell Cato operated.

They thought they had received their third but Quioto’s drive from the left side whisked past the far post as they went to the break with a 2-0 advantage.

Hart’s men look a renewed team on the resumption and sought to reduce the deficit in  the opening moments despite an aggressive Honduras defence.

T&T got the goal they were hoping for in the 51st minute. From Khaleem Hyland’s left-side corner,  Mitchell climbed unchallenged to head past the goalkeeper and reduce the gap 2-1. Later captain Kenwyne Jones was picked out unmarked in the area but turned his attempt wide of the post before being ruled off-side.

Honduras brought on Hernandez as a replacement for Quioto in the 68th minute and he immediately showed his worth by rattling the T&T crossbar with a powerful header, when Emilio delivered perfectly for him in the T&T penalty area, only a minute after coming on.

Willis Plaza who came on for the usually dangerous Joevin Jones, gave the visitors some hope when Kenwyne Jones threaded one to him on the right of the Honduras defence, but his low attempt was gobbled up by goalkeeper Donis Escober in the 76th minute.

The Hondurans though, would not be denied when Boniek Garcia was put through down the left flank in the 81st and his centre was met nicely by Hernandez who steered past a hapless Phillip for the win.