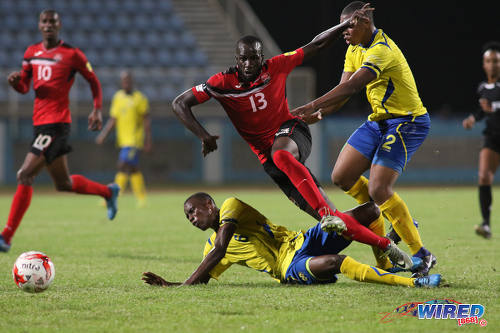 It was a dose of double sweet debuts for Senior Men’s team head coach Dennis Lawrence and forward Jamille Boatswain as this country completed a 2-0 victory over Barbados in Friday night’s international friendly at the Ato Boldon Stadium.

Lawrence made his debut as senior team head coach while Boatswain entered the field in the 32nd minute before opening the scoring in the 36th and 45th minutes also on debut for the hosts.

The match began with a minute silence as a mark of respect to assistant coach Stern John whose daughter Nikela passed away the previous evening. The members of both teams also wore black armbands for the match.

Following a near miss by Jameel Perry, Boatswain demonstrated how to convert as he collected a ball on the left after being sent clear by a long ball from Darren Mitchell, before firing a powerful right-footer into the top left-hand corner of Dario Weir’s goal to give the appreciative crowd something to cheer.

With the half winding down, Boatswain then doubled T&T’s advantage when he latched onto Hashim Arcia’s pass and unleashed a right footer into the far left corner.

Marvin Phillip was the captain on the night for T&T and he had little to do in goal as T&T kept the visitors at bay for the majority of the encounter.

Perry went close with a left footed attempt that missed the upright with Weir in no man’s land.

Then came a pivotal moment a minute later when Perry got a through ball from the middle and, after being sent wide by the retreating defenders, slotted his left-footed shot wide of the mark, with Weir beaten.

Sean De Silva also went close with a near post shot that connected with the post on its way out in the 66th.

Substitute Jamoul Francois missed a glorious opportunity to complete the rout with a third item in added on time when he met a through ball but directed his effort inches wide of the far right post from close range.

Lawrence made seven changes during the match with Keron Cummings making his first international appearance since recovering from a gun shot injury sustained last year, and veteran Carlos Edwards also making a second half appearance. Boatswain, Francois, Perry and Jared London all made their senior international debuts for T&T on the night.

The Trinidad and Tobago National Senior Team began life under new coach Dennis Lawrence with a 2-0 win over Barbados tonight, after a double by substitute Jamille Boatswain at the Ato Boldon Stadium in Couva.

The result snapped a run of three successive defeats on home soil by the Soca Warriors, who lost 2-0 to Costa Rica in World Cup qualifying action last November under Stephen Hart and then suffered back-to-back losses to Suriname and Haiti in the Caribbean Cup in January.

Boatswain, a Defence Force striker, was the biggest winner on the night although he ended with a rare statistical anomaly. He came off the bench to score twice before he was also replaced, midway through the second half.

Since he did not remain on the field as a substitute, FIFA rules do not credit him with a cap. So, he might be the only player in international football with two goals to his name despite not being credited with a single appearance!

Lawrence explained afterwards that he decided on sharing the 90 minutes evenly between Jameel Perry, Boatswain and Roach. So the shortened run-outs for the trio were not an indictment of the performance of any of them.

If this unnecessarily complicated the matter of Boatswain’s first international outing, there was little else to worry the rookie Trinidad and Tobago head coach.

The “Bajan Tridents” are ranked 156th in the world by FIFA—some 72 places lower than Trinidad and Tobago. They hustled and gave as good a showing as could be expected. But Warriors goalkeeper Marvin Phillip, who wore the captain’s armband, had just one save to make over the 90 minutes and it was a regulation catch.

Almost certainly, tonight’s workout would barely register as a test for a backline that faces Panama and Mexico next in World Cup qualifying action on 24 and 28 March respectively.

Still, there were encouraging signs for football fans as Lawrence’s team gave an early indication of their ethos with their efforts to keep the ball and attack in numbers, which was chalk and cheese from the timid, reactionary approach of his predecessor, Tom Saintfiet.

The Warriors played a 4-2-3-1 formation, which saw the full backs hug the touchline and the central defenders play as wide as the width of the penalty area while either of two holding central midfielders dropped into the space on occasion.

It was a near replication of W Connection’s system and certainly made sense of Lawrence’s decision to name Stuart Charles-Fevrier among his assistants. It was hard, though, to spot Fevrier on the bench, which could not hold the 11 technical staff members plus players—and there were five additional chairs for the spillover.

“Like Lawrence need to buy a bigger bench, boi!” shouted one member of the crowd.

Gone are the days when former head coach Stephen Hart had to choose between a masseuse and a team manager for overseas trips. And Lawrence’s bench was not even at full strength as an assistant coach, Stern John, was given the night off after the untimely death of his 19-year-old daughter, Nikela, roughly 24 hours earlier.

There was a moment’s silence for Nikela before the opening whistle.

On the field, the shackles appeared to be off as the Warriors were far more adventurous in their approach. And Lawrence certainly asked a lot of his full backs who were expected to be as comfortable on the ball as wingers.

Apart from Boatswain, midfield maestro Hughtun Hector and versatile defender Triston Hodge—who switched from left back to central defender without skipping a beat—looked the most comfortable with their new job descriptions.

Elsewhere, there was plenty of application and a few flashes of endeavour as the likes of Hashim Arcia, Darren Mitchell and Sean De Silva battled manfully.

Time will tell if having a midfielder drop between his two central defenders to collect the ball is a feasible plan under a typical Mexican full press. But  against Barbados, there was little cause for concern.

By the 10th minute, the Warriors were already in control and it was a surprise that they had to wait as long as the 36th minute for the opening goal.

Off a De Silva corner kick, Daneil Cyrus, restored to his favored role in central defence, almost got the first item in the 22nd minute with a header that clipped the top of the bar. And then Perry missed the first clear opportunity as he hit agonisingly wide after being sent clear by Arcia.

It spoiled a decent debut for Perry, who got around the pitch and held up the ball fairly well.

Boatswain is a more natural goalscorer, though, and boy did he prove it. Within seconds of his introduction, the bustling forward ran on to a diagonal ball from Mitchell, stepped inside off the left flank, stumbled and recovered his poise to blast into the far corner off the underside of the bar.

It was a replay of his sensational Pro Bowl strike against Central FC just last month.

As if that was not enough, Boatswain gave an encore in the first-half stoppage time. This time, Arcia released him down the other channel.

Bang! He spanked the ball low across the body of the Barbadian goalkeeper and into the far corner off the inside of the post.

At halftime, the crowd rose to its feet to offer a standing ovation to the striker whose knack of scoring goals earned him promotion from table-proppers Point Fortin Civic to the Warriors—via Defence Force—in a matter of two and a half months.

Leston Paul gave a decent showing off the bench in the second half while De Silva struck an upright and Jomoul Francois nearly got a late debut goal. But it was job done for the Warriors at the final whistle.

A two-goal win over Barbados might be two or three items under par. And the jury is still out on whether Trinidad and Tobago have the players with the necessary technique to implement Lawrence’s tactics against more accomplished opponents.

But, for the 3,000 supporters who turned out, it was the most fun they have had at a Warriors game in some time.