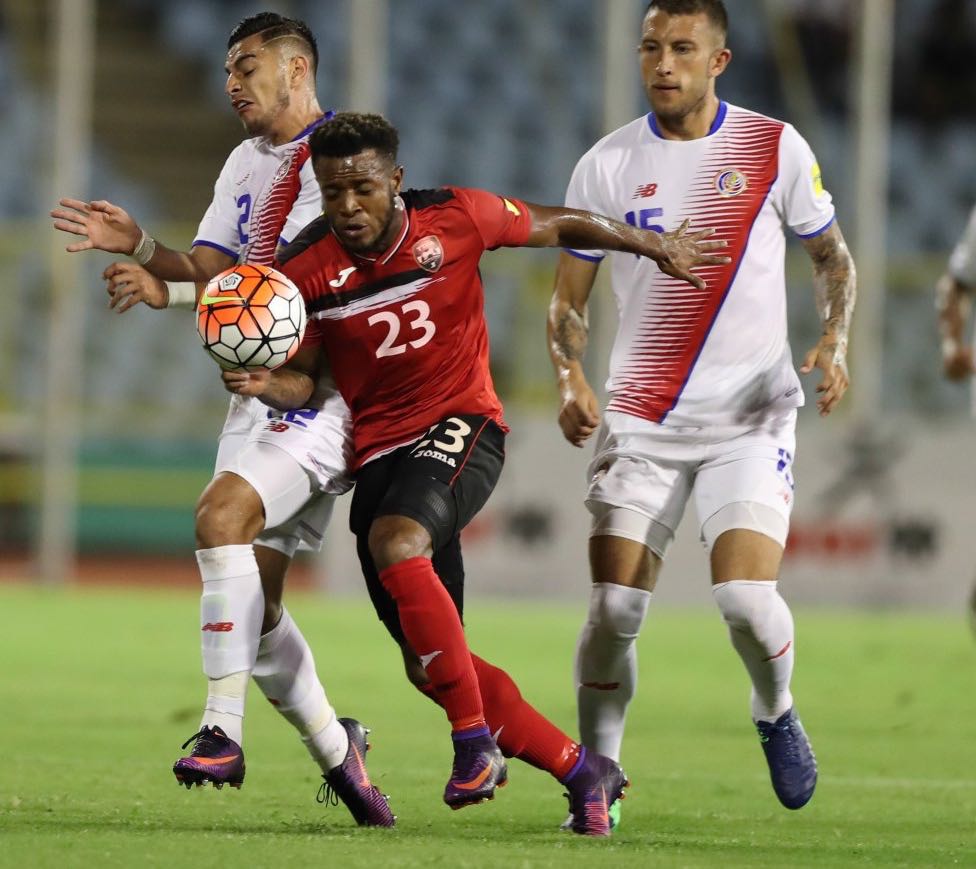 Trinidad and Tobago captain in Wednesday night’s international friendly with Ecuador, defender Carlyle Mitchell is maintaining high spirits as this country looks ahead to its two crucial World Cup qualifying matches in early September against Honduras and Panama.

The upcoming period of just over a month will be as vital as any as head coach Dennis Lawrence attempts to get the best out of his squad in search of much needed points in order to keep the Russia 2018 qualifying chances alive.

Mitchell, returning from injury after a six-month lay off and wearing the captain’s armband for the first time, described Wednesday’s encounter played in front of just over 20,000 fans at the Estadio Banco del Pacifico, as useful for the T&T team.

“It felt great for me personally to get back out there for the national team. Captaining the team was no doubt a great honour and I was happy to put one in the net on the night especially against a team like Ecuador and we were playing away from home,” Mitchell told TTFA Media.

“I thought we were organised and compact in the first half and we matched them for some periods. But unfortunately we didn’t maintain that and they (Ecuador) began to pressure us and they got a lucky penalty which they put away and then we gave up another goal late in the match. But overall I thought we looked decent and it was a great opportunity for some of the new boys to get a taste of high level international football,” Mitchell said.

Mexican-based winger Jomal Williams also made good of his opportunity before Lawrence after missing out on the two recent qualifiers against Costa Rica and United States because of injury. Williams put in a good shift and had a near miss on goal in the first half after Ecuador had taken a 1-0 lead.

“The game wasn’t bad by any means. Yes there were some parts where we let ourselves down and they took advantage especially with a large crowd behind them but I thought our boys handled it well. We had a couple really good chances to score again, including the one I put wide and maybe if we got the goals at those points in the match then things may have turned out differently,” Williams said.

“But now we have to look ahead to the Honduras game and I feel very good about the direction we are heading in. I think the coach has a good idea of what level the players are on after this last game and he will now sit and assess things and come up with the best formula for the next game against Honduras. I think we will be ready and with strong preparations we will be looking to get the win on September 1st,” Williams added.

Mitchell, who is off to India to play with East Bengal FC alongside forward Willis Plaza, will be hoping to return to qualifying action after last appearing in the qualifiers in the 3-1 defeat to Honduras in November in which he also scored with a header.

“My last qualifier was against Honduras and I scored. I am definitely looking forward to making a return against them and hopefully make a solid contribution to the team. Everything we do between now and September will be critical both on and off the field and I know the boys are all looking forward to the occasion,” Mitchell said.

T&T will face Honduras at the Ato Boldon Stadium from 8pm on Friday September 1st before traveling to meet Panama four days later. The Senior Team will resume training on August 14th.