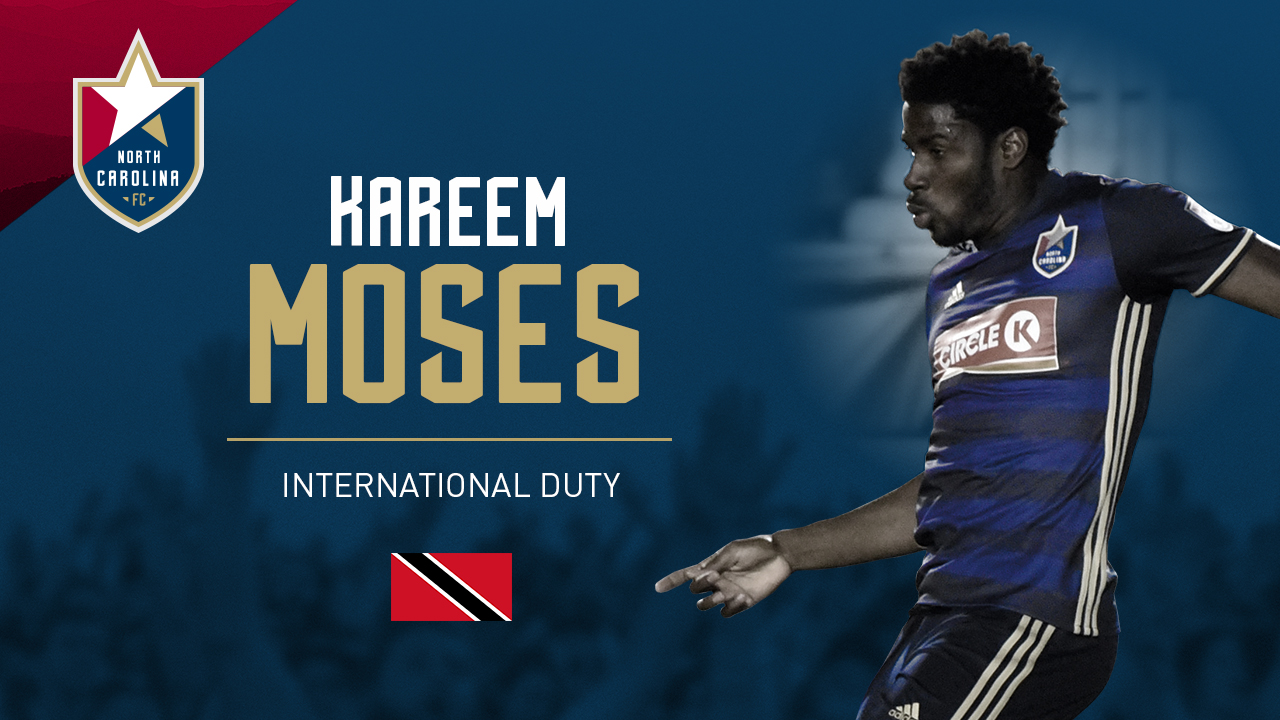 North Carolina FC defender Kareem Moses has been called up to the Trinidad and Tobago National Team for a pair of FIFA World Cup Qualifiers. The two matches will mark the last qualifiers in the final round of CONCACAF qualifying known as ‘The Hexagonal’.

“It’s an absolute honor to represent my country and I'm truly blessed to be given this opportunity,” said Moses. “It is always a privilege to wear the red, white and black and I hope to add quality to the squad with the work I've been putting in here with North Carolina FC.”

Moses is receiving his first national team call up since 2013 when he appeared in friendlies against Estonia and Peru. Overall, Moses has made 13 appearances and logged 694 minutes, including helping the Soca Warriors to a runner-up finish at the 2012 Caribbean Cup.

This season, Moses has played in 16 matches and 988 minutes of NASL play with NCFC. The defender has recently stepped into a starting role and has been selected to NASL Team of the Week twice in the last four weeks.

Moses, who is 27, has not represented Trinidad and Tobago in four years while his senior international career to date consists of one start and six substitute appearances—four of the outings were in friendly matches.

At present, Moses is employed by North Carolina FC in the North American Soccer League (NASL).

Lawrence, according to TTFA Media Consultant Wayne Cunningham, felt it necessary to summon Moses after “an untimely blow” from FIFA with the extended suspension of defender Alvin Jones, who received a straight red card during last month’s 2-1 qualifying loss to Honduras at the Ato Boldon Stadium in Couva.

The FIFA disciplinary committee, according to the TTFA release met on the issue of Jones’ suspension on 28 September. Yet the Warriors still travelled to Mexico unaware of the matter since—again according to Cunningham—team manager Richard Piper was unable to get confirmation before they left Trinidad on Monday 1 October.

“This has compounded an already dicey situation for the T&T Coach,” stated the TTFA release, “with players recovering following the weakening effect of a virus plus the day to day monitoring of defender Mekeil Williams already on his plate.

“With these factors in mind and after some deliberation, the coaching staff opted to call in former North East Stars defender Kareem Moses into the squad.”

If Williams does not recover in time, Lawrence could find himself with just six available defenders on Friday of whom only three—Daneil Cyrus, Curtis Gonzales and Kevon Villaroel—have playing experience at this level.

If, as suggested, Lawrence prepared for Friday’s contest with Jones rehearsing for the right back role, then the fresh start promised for the upcoming qualifiers seem to be haunted by some of the same managerial issues as the unsuccessful campaign he is trying to consign to memory.

Jones was the only natural right back in Lawrence’s 23-man squad although Williams, Cyrus and Gonzales have all played there before.

Notably, Moses’ inclusion saw him elevated over not only Carlyle Mitchell and Radanfah Abu Bakr but also the North East Stars pair of Yohance Marshall and Julius James.

The 31-year-old Marshall won 10 caps under former coach Stephen Hart and scored a memorable equaliser against Mexico in a 4-4 draw at the 2015 CONCACAF Gold Cup while he also played for 90 minutes in a 3-0 friendly loss to Argentina in 2014. He also played professionally in the Mexico second division between 2015 and 2017.

Moses whose North Carolina FC campaigns in the North American Soccer League, was a last-minute addition by coach Dennis Lawrence as cover for suspended defender Alvin Jones. The W Connection defence man was given a straight red card for a vicious tackle in the qualifying game against Honduras at the Ato Boldon Stadium in Couva last month and Lawrence picked him as part of a 25-man squad, after it was felt he had served the mandatory one-match suspension for a red card when he missed the Panama game on September 5.

But the Disciplinary Committee of the FIFA, the world governing body for the sport, ruled that Jones had to serve another suspension which will be against Mexico. Moses, a former St Ann’s Rangers and North East Stars defender last wore the red, white and black of T&T back in 2013. He was in action last weekend, putting in a solid performance with an assist for their opening goal in a 5-0 victory over Indy Eleven.

The Soca Warriors are unlikely to have defender Mikeil Williams for tonight’s encounter after he picked up an injury while playing for his for his club, while feverish attempts were being made Wednesday to have C.D. Pasaquina central midfielder Leston Paul recover in time from a virus that left him struggling for the past few days. The Soca Warriors will produce a virtually new team, with some 10 starters out, as Lawrence has shifted his focus on developing a team for the 2022 qualifiers.

T&T have just three points from a 1-0 victory over Panama at the Hasely Crawford Stadium in March and cannot qualify. Its last game against the Mexicans at the same venue ended in a controversial 0-1 lost when Joevin Jones thunderous left footed goal from outside the box was disallowed for him being off-side, when video replays clearly showed the speedy winger was onside.

That defeat added to countless others by a T&T team against Mexico at the world cup qualifiers. The Warriors only successes at the qualifiers against the Mexicans came during the 1974 qualifiers when T&T got a double strike from Everald ‘Gally’ Cummings in the 35th and 39th minutes and a goal apiece from Steve David (52nd) and Warren Archibald in the 62nd to clobber Mexico 4-0. And later in 2005, striker Stern John, now the Soca Warriors assistant coach, also scored twice to beat Mexico 2-1 at the Hasely Crawford Stadium to send TT into a play-off with Bahrain.