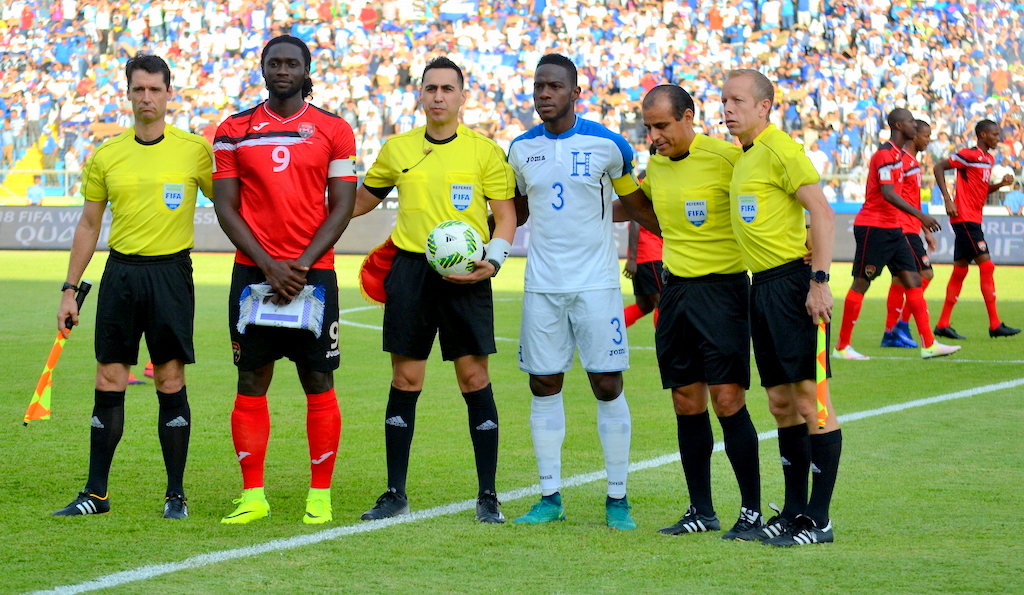 Former national players Brent Sancho and Angus believe Trinidad and Tobago should remember their ex-teammate Kenwyne Jones as a true patriot and servant to this country.

Jones announced his retirement on Monday after his MLS club, Atlanta United, decided not to take up their option on his contract.

Jones, 33, a former national captain said quitting was not an easy decision but after discussing it with those close to him, he decided it was time to hang up his boots. Sancho, who played alongside Jones at the 2006 World Cup, and brought him in on loan at his club Central FC last year, hailed the commitment Jones displayed to the red, white and black.

“His (greatest) memory is his commitment to the country. When you look at how many years he’s represented his country, he’s never shun his responsibility in coming home. At the height of his profession, he was playing in the (English) Premiership and he still would make his trip to come back and play on every occasion given. It’s very rare you see a player of that magnitude and has that star power that is always willing to represent Trinidad and Tobago. That commitment really sticks out in my memory of Kenwyne Jones,” Sancho said.

Sancho believed Jones’ legacy as a top striker in the CONCACAF region is cemented given his aerial prowess which proved an asset to TT.

“He’s always been a threat. When you speak to other CONCACAF nations and you listen to people outside Trinidad and Tobago speak about him, and the fear that he strikes in a lot of team’s minds, you’d have to say he was our danger man throughout his career,” he said.

With a record of 23 goals in 82 games, ranking him sixth on the all-time scoring list for TT, Sancho and Eve acknowledge Jones should have scored more goals for TT but neither blamed him for it.

“In terms of his game, he may have wanted to score more goals for his country, Sancho said, “When you look at the way he played, he did not have the kind of support that maybe others had in the past. He was asked to lead the line many times on his own. In terms of goalscoring opportunities, he’s not a creator of his own opportunities but he wasn’t supplied enough to score.”

Asked why Jones became such a polarising figure in TT football with a number of people clamouring for him to be dropped even though ex-TT coach Stephen Hart placed the utmost faith in him as captain, Eve said:

“He is not one of the natural strikers that we would normally have. He is big, he’s robust, he likes to head the ball, and we weren’t accustomed to those type of strikers. We were more accustomed to those fleet-footed strikers, players who run and dribble the ball and those type of exciting players. He is not built in that mould, his skillset was not made in that way. I also think the national teams did not play to his strengths – they did not have natural wingers and give him the service that he would like or have some striker play around him so they can pick up the ball after a flick. It’s our fault that he didn’t show his true prowess.”

Eve, a former national captain, described Jones as “a tremendous servant to the country” and feels he should be given a testimonial match to celebrate his career. “All national players who would have served (deserve it) but unfortunately we don’t really do it. There’s a number of national players should have gotten and Kenwyne is one of those who should get, but the past doesn’t tell me he will get one,” Eve said.

Eve, who holds the record for most caps – 117 – said injury may have played a big part in Jones deciding to walk away from the game.

“It’s unfortunate. I think it’s due to injury he is bowing out. I know athletes want to bow out on a higher note, but I think God has given him a lot of blessings in his life. To play at Premier League level is not easy to do. Very few Trinidadians have had that opportunity. Congratulations to him on all he has done and accomplished and we should celebrate him a a country.”