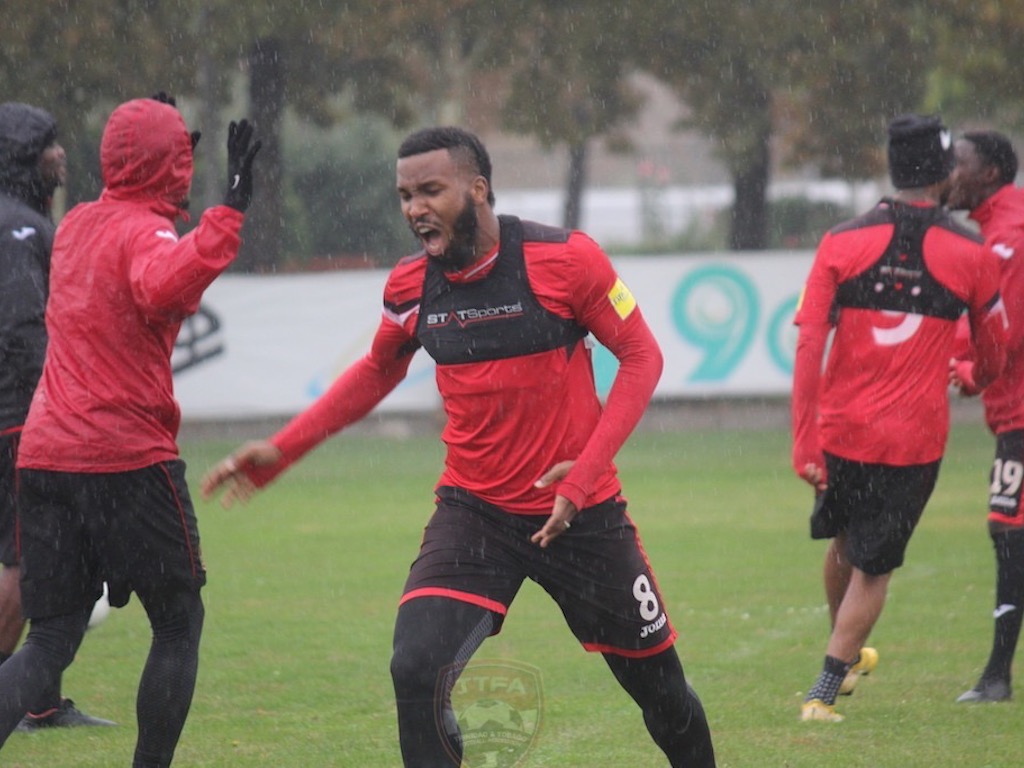 Trinidad and Tobago’s Senior Men’s Team underwent its first training session in wet and chilly conditions on Monday morning in Tehran as head coach Dennis Lawrence conducted a one-hour session at the Iran Football Federation headquarters training pitch. Lawrence and members of the squad arrived in Tehran on Sunday night following the 14-hour journey to Dubai from Fort Lauderdale before the one hour, 45 minute flight to Tehran.

It rained for much of the day and temperatures reached 15 degrees during the midday session and dropped to a further 11 degrees by 6pm.  The Iran national team, coached by Carlos Quieroz also trained at the facility prior to T&T’s session ahead of Thursday’s international friendly at the Azadi Stadium,

On Saturday it was an historic moment for the female football fans of Iran as hundreds of them, separated from male supporters, watched home team Persepolis going down to Japan’s Kashima Antlers after putting up a tough fight in the Asian Champions League. Women were allowed 300 seats at the 90-000-seater venue and it is left to be seen how many will show up at Thursday’s friendly.Some 100 women attended last month’s friendly against Bolivia at the national stadium here. Women have been barred from attending matches since the 1979 Islamic revolution, with authorities saying they must be protected from the masculine atmosphere. But  female fans were permitted to cheer on their team  versus Bolivia with horns and national flags from a separate stand inside the stadium.

Queiroz named a 24-man squad on the weekend to prepare for the two upcoming friendlies with T&T and Venezuela. The squad includes star forward Karim Ansarifard, who played at the 2018 World Cup.

The striker, who scored the equaliser for his country in their 1-1 draw with Portugal at the World Cup, recently joined Nottingham Forest from Olympiacos. Club Brugge forward Kaveh Razaei, experienced 34-year-old captain Masoud Shojaei and Kazan-based striker Sardar Azmoun who has 23 goals from 37 matches have all been included in the home team’s roster.

T&T will be captained by Khaleem Hyland, Charleston Battery’s US-based midfielder Ataulla Guerra and German-based winger Joevin Jones and Kazakhstan-based defender Sheldon Bateau are in the T&T line-up along with Saudi Arabia-based duo Daneil Cyrus and Lester Peltier who is back in the team after a three-year absence.

Hyland said it was clear that  game against Iran would be one of T&T’s biggest assignment in some time.

“We know the quality that Iran has. They have a huge coach and they are just coming off a strong showing at the World Cup” Hyland told TTFA Media at the Parsian International hotel in Tehran on Monday.

“We played against them before the 2014 World Cup in Brazil and I think this is a huge game for us to see what level we are at and where have to go. I expect a tough game and the conditions changes just the same as Saudi Arabia. One minute it can be very humid and then very cold. We are over here to get a job done and we’ll try to stay focused and go out and do what we are here for and try to get a positive result on Thursday,” Hyland added.

With T&T preparing for the 2019 CONCACAF Gold Cup and CONCACAF Nations League, the former Belgium-based midfielder  stated, “These are important games and you can only get better playing teams like these because they play in World Cup every four years and I think it’s a great opportunity to finally get ready for the Gold Cup and Nations League next year by playing teams of this high quality.

“We knew when Dennis took over the team it was a very difficult period. He was trying to patch up things and it was not the easiest of positions for any coach to come in under. Right now we are at a great level since then. We had to take it step by step since to fix things and so far we are getting there. Everyone has taken Dennis on board and he he is trying to implement what he wants us to do and how he wants us to carry about ourselves. I think he is a role model for a lot of the guys. He scored to take us to the 2006 World Cup and he has a lot of experience coaching under huge coaches. I think he can only help us and hopefully we can put every puzzle together and get ready for the upcoming tournaments,” Hyland added.