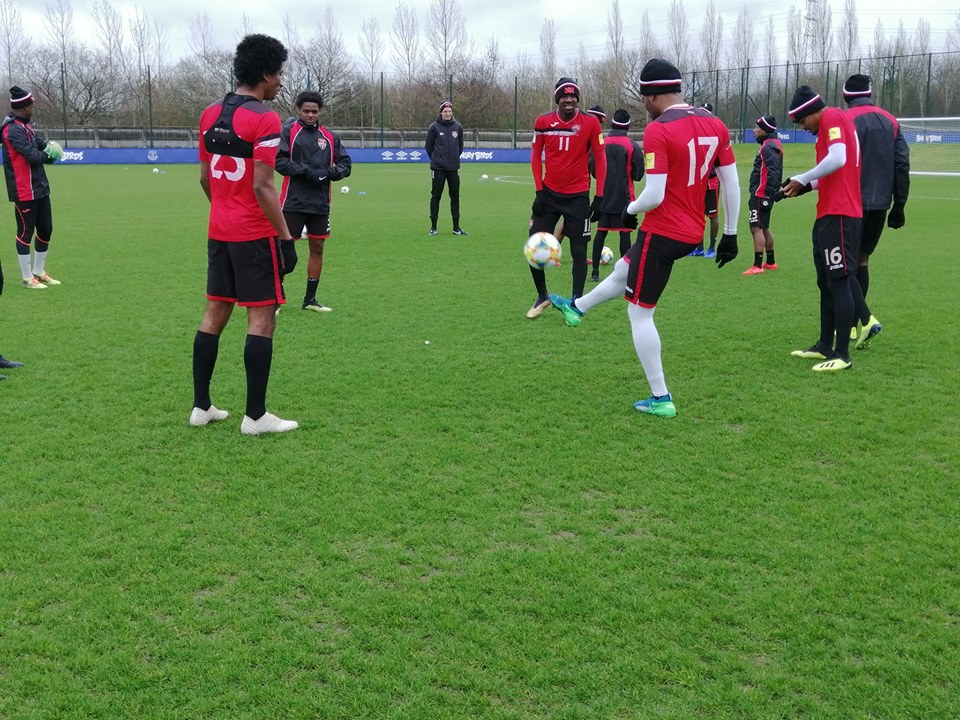 Trinidad and Tobago’s Senior Men’s Squad arrived in Wrexham on Monday morning and wasted little time before undergoing their first training session on Welsh soil as head coach Dennis Lawrence put his players through their paces at the Everton Training facility at Finch Farm, a mere 20 minutes drive from the team’s base camp at the Double Tree hotel.

Lawrence had the majority of his players involved with the exception of Deportivo Saprissa defender Aubrey David who arrived later on Monday evening. Lawrence’s session was a lively one in wet conditions as the rains came down for most of the session. But it didn’t dampen the mood among skipper Khaleem Hyland and his teammates nor Lawrence and his staff as the former Everton assistant was warmly welcomed and looked after by some his former staff members at the English Premiership club. Club secretary and director of football operations David Harrison looked on at the session and had some glowing remarks to make about Lawrence.

“We got a call from Dennis  to see if we could help out with some facilities for training and obviously we are delighted to see Dennis again and delighted to be able to invite the team to come over and train here again,” Harrison told TTFA Media.

“Occasionally we tend to have a lot of of European teams come here if they are playing over at Anfield, Champions League or Europa league games we tend to let them use our facilities the day before a game here,” he said.

When asked where his heart lies come Wednesday’s clash at The Racecourse, Harrison responded,

“It’s got to be with Dennis really. It’s a big game for Dennis and a real test for some of the players but I’m sure they will be able to step to the plate come Wednesday night. It’s a real coaching challenge for Dennis as well.

“We were delighted when Dennis got the position with the Trinidad and Tobago team. He was always a  well respected member of Roberto’s coaching staff and you can see he’s taking a lot of his learning from his time at Everton and it was really good to see him out in the middle of the park with the boys, passing on his knowledge to them and hopefully they could give him a result on Wednesday evening,’” Harrison added.

Team skipper Khaleem Hyland added, “It’s been a great start for us even thought it’s a bit cold and rainy today but this is typical European weather  The facilities were great and hopefully we can continue to focus on the job. Since I have been on the national team the mood has always been great. It’s been one love and one family. We are just looking to work hard on and off the pitch as we look ahead to having a strong performance on Wednesday.

“We have to give respect to Wales as the have world class players but we cannot show too much respect. Football is a game won on the day and who capitalises on their chances will be the winner. Hopefully we can stick to our game plan and complete our job,” the T&T captain said.

The T&T team will train at the Racecourse on Tuesday evening ahead of Wednesday’s match which is expected to be a sold out affair.