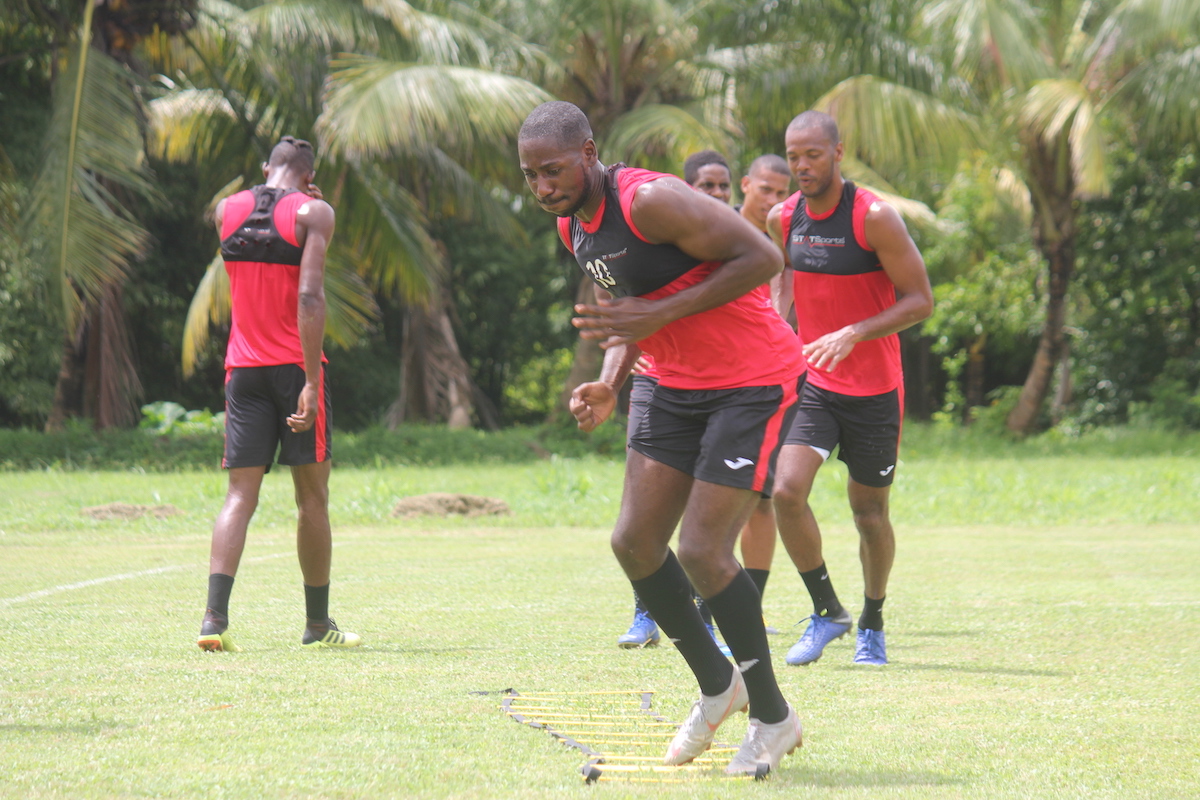 This country’s Senior Men’s Team players were put through their paces under sunny conditions at the St Lucia Football Association training centre on Tuesday morning as head coach Dennis Lawrence commenced a short training camp ahead of Friday’s CONCACAF Nations League qualifier against Martinique in Fort-de-France.

Turning out in the T&T training kit for the first time were newly called up trio forwards Daniel Carr and Ryan Telfer as well as former national under 17 midfielder Andre Fortune. Winger Levi Garcia, Deportivo Saprissa defender Aubrey David, Belgium-based defender Sheldon Bateau and Kevin Molino all joined the residential camp in St Lucia on Tuesday as Lawrence looked to intensify his preparation for the qualifier.

With some new faces involved this time around, experienced US-based midfielder Kevan George said it is extremely important that the players make the most of the sessions ahead of matchday.

“It’s really the first time we are back together since the disappointment of the Gold Cup campaign and so for a lot of us, it’s good to be back as group but understanding that this is a critical period for us to brush things off and bring some respectable levels back to our team,” George told TTFA Media on Tuesday.

“Coach has introduced some new faces and it’s good for the squad. We have to gel as quickly as possible and settle into the preparations. We all know Martinique is a decent team and will be very difficult to overturn at home but we have to believe in our ability and approach and take the game to them,” George added.

Carr meantime was buzzing after his first session under Lawrence.

“I’m very proud about this. From a young age I have always had dreams and ambitions of playing for Trinidad and Tobago. I wouldn’t say I’ve been eying the call up but I always thought if you do well in club football then they will see me. Since I became a professional I’ve always thought that I need to step up and hopefully one day I’ll get the call up which I have now” Carr said.

The former Aldershot Town forward is fully aware that he has to show his worth early for the red,white and black.

“It’s pretty black and white. If I play well I get called up again, if not then I don’t . I guess it’s important for me to settle in very quickly otherwise I wouldn’t be here many more times. It’s also important for me to do well in my club football. It all joins up together. It’s very important that I just put my head down and work. I’m not here for a holiday, I’m here to kick on and play and represent Trinidad and Tobago,” Carr added.

Looking ahead to Friday’s encounter, he said, “I’m just taking it all in really. I don’t know exactly what to expect from Martinique. I’m just preparing like I would do for any other game. I obviously just want to do my best for the team and that’s all that really matters,” he said.