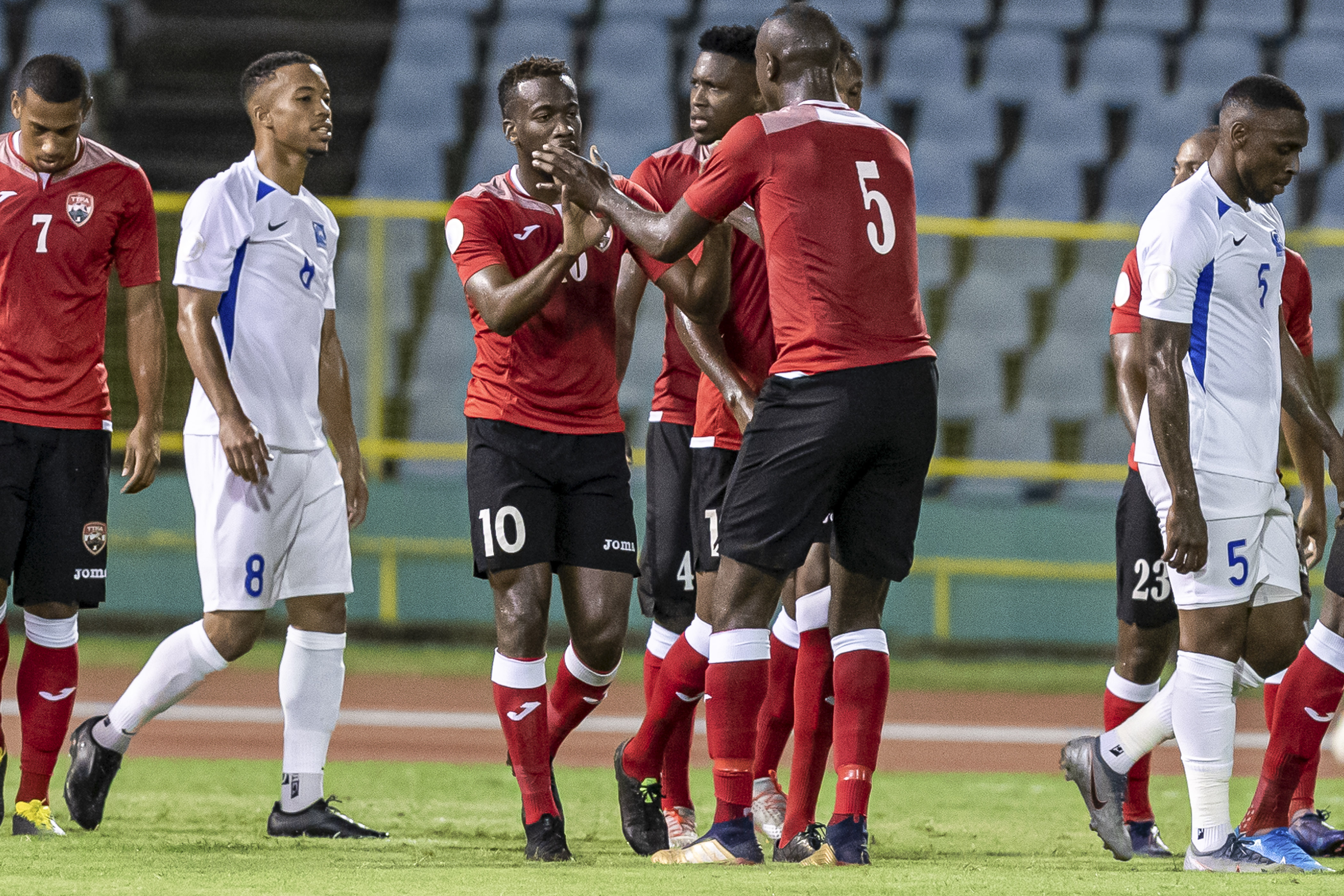 Trinidad and Tobago had to settle for a point after conceding two second half goals in a 2-2 draw with Martinique in CONCACAF Nations League qualifying at the Hasely Crawford Stadium on Monday night.

Playing before 2000 fans, T&T were purposeful and looked a driven side in the first half. Minnesota United midfielder Kevin Molino drilled a right footer home on 17 minutes to beat goalkeeper Loic Chauvet.

The halftime whistle was still ringing in fans’ ears when Ryan Telfer doubled the lead. The forward, who debuted for Trinidad and Tobago last week, got the last touch on the ball in a goal-line scramble.

But Martinique fought back at the hour mark, with a corner kick deflecting off Trinidad and Tobago’s Daniel Carr to cut the deficit in half.

And then Jordy Delem was there in the 80th minute to knock in a ball from a set piece that had taken a deflection and sat for the taking in the box.

The home side surged forward, looking to retake the lead, but Chauvet’s double save in the 88th minute to efforts by Leston Paul and Molino  helped earn Les Matinino the point.

T&T faces Honduras in their next Nations League clash at home on October 10 and will play a friendly away to Mexico in Toluca on October 2.


Wired868 - Editor’s Note: Trinidad and Tobago’s longest ever stretch without a win is 12 matches which the team endured between 1969 and 1971 under coaches Claude “River Vine” Maurice and Ken Henry and again in 1985 under Roderick Warner.

TT men’s football team’s lack of killer instinct was evident on Monday night, as they allowed Martinique to battle from a two-goal deficit to force a 2-2 draw at the Hasely Crawford Stadium, Mucurapo.

This game was the return leg of the teams’ League A Group C tie, in the Concacaf Nations League, following their 1-1 draw in Martinique on Friday.

Kevin Molino and Ryan Telfer gave TT a 2-0 cushion with goals in either half, but striker Daniel Carr responded with an own goal, in the 59th, and Jordy Delem tied the scores with 11 minutes of regulation time remaining.

Both T&T and Martinique have two points from as many matches, with Honduras yet to feature in this three-team group. T&T will play Honduras on October 10 and 13, while Martinique will tackle Honduras on November 14 and 17.

However, Monday’s result did little to appease the T&T footballing public, as the winless streak was extended to 12 – five drawn results and seven defeats since their last victory, against the United Arab Emirates, on September 6 2018.

Telfer, on the left flank, was picked out on the left by Kevan George but his header was poorly cleared by Delem. The loose ball fell to Molino who drilled his right-footed shot past a stunned Loic Chauvet in the Martinique goal.

Martinique had their chances to tie the scores, and they came close in the 33rd, when substitute Thierry Catherine sent a ball to overlapping left-back Yordan Thimon whose deflected right-footer was tipped overbar by T&T goalkeeper Marvin Phillip.

Telfer, who impressed on his international debut on Friday, got on the scoresheet a minute into the second half.

Paul teed up Garcia on the right and the winger sent a cross which was badly spilled by Chauvet. Molino pounced on the loose ball and fed Telfer who slipped the ball into the back of the net, despite a desperate lunge from Delem.

Telfer had a chance to extend the lead 10 minutes later, after getting a through-ball from Paul, but his left-footed effort went wide.

Martinique reduced the deficit shortly afterwards, as Carr got his right foot to a corner from Daniel Herelle and sent the ball into his own net.

In the 72nd, Carr, the English-born debutant, had a wonderful opportunity to restore the two-goal advantage. A ball from the left by Molino fell to Telfer who, in turn, passed to Carr but the centre-forward’s effort was cleared by Delem for a corner.

That miss proved costly as Stephane Abaul’s freekick wasn’t cleared to safety by T&T captain and stopper Sheldon Bateau, and Andy Cesar collected the loose ball, passed to Delem and the defender slotted home past Phillip.

Chauvet produced a pair of close-range saves to deny Paul and Molino, in the 87th minute, to ensure his team went home with a share of the points.

Both teams made three changes from Friday’s match.