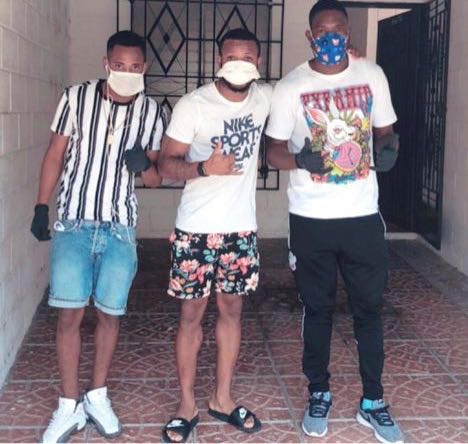 The NC, which is headed by businessman Robert Hadad and comprises attorney Judy Daniel and retired banker Nigel Romano, has teamed up with the Unicomer Group and the El Salvador Football Federation (FESFUT) to ensure that national footballers Jomal Williams, Jamal Jack and Jomoul Francois, currently stranded in El Salvador, are kept safe and healthy until they can make their way back to T&T in light of coronavirus (COVID-19) pandemic restrictions.

The players, who have each represented the Soca Warriors senior team, were playing in El Salvador's Primera Division for the 2019/20 season but were facing increasing pressure to meet their daily demands after that country's government implemented lockdowns which forced the cancellation of the remainder of the season.

Defender Jack offered his genuine appreciation to all those involved in making the provisions possible.

“Mr Robert Hadad, a heartfelt thanks to you and your team for reaching out to us. We appreciate what you did for us,” said Jack. “I am sincerely grateful for the assistance.”

In March, the government of El Salvador declared a national quarantine in the fight against COVID-19 and has imposed strict measures to reduce the spread of the virus which has directly limited the footballers' movements and access to food and other supplies.

Managing Director of Unicomer (Trinidad) Ltd Clive Fletcher liaised with Unicomer Group Chief Executive Officer (CEO) Mario Siman to ensure that the players are now housed together and taken care of until T&T's borders are reopened.

The Unicomer Group operates in 27 countries from its headquarters in El Salvador and operates retail brands of the Unicomer Caribbean such as Courts, Courts Optical, Ashley Furniture HomeStore, RadioShack, Lucky Dollar and Servitech.

"TTFA would also like to acknowledge the tremendous assistance offered by Meybely Lopez and the president of the El Salvador Football Federation, and the player's clubs in making the arrangements possible," according to the football association's release.

"The TTFA will continue to communicate with the players to ensure that they are as comfortable as possible until they can return home. The players have expressed thanks to the Unicomer Group and the El Salvador Football Federation for their continued support."

VIDEO - Thank You from T&T trio based in El Salvador

Jomal, Jamal and Jomoul are now under one roof in El Salvador. It might sound like the making of a sitcom but in fact it is one of multiple stories about the impact of Covid-19 on Trinidad and Tobago internationals across the globe.

In this case, 26-year-old Jomal Williams, 32-year-old Jamal Jack and 24-year-old Jomoul Francois were playing professionally in El Salvador’s Primera División, only to find themselves trapped abroad when travel restrictions hit. El Salvador’s football season was scrapped and they are unable to return to Trinidad.

Williams has 19 senior international caps for the Soca Warriors with two goals while Francois and Jack have three and two appearances for the Trinidad and Tobago Men’s National Senior Team respectively.

A release from Trinidad and Tobago Football Association (TTFA) media manager Shaun Fuentes claimed that the Fifa-appointed normalisation committee chairman Robert Hadad reached out to help. (The release was sent via email as the TTFA’s website is down due to non-payment since Hadad took charge).

“The Trinidad and Tobago Football Association led by the Fifa normalisation committee has worked with the Unicomer Group and the El Salvador Football Federation (FESFUT),” stated the release, “to ensure that Trinidad and Tobago footballers Jomal Williams, Jamal Jack and Jomoul Francois—currently stranded in El Salvador—are kept safe and healthy until they can make their way back to T&T in light of Covid-19 restrictions.”

Unicomer (Trinidad) Ltd, a group of companies which includes popular furniture store Courts, also got in on the act.

“Managing Director of Unicomer (Trinidad) Ltd, Clive Fletcher, liaised with Unicomer Group CEO Mario Siman to ensure that the players are now housed together and taken care of until T&T’s borders are re-opened,” stated the TTFA release. “TTFA would also like to acknowledge the tremendous assistance offered by Meybely Lopez and the president of the El Salvador Football Federation, and the players’ clubs in making the arrangements possible.

“TTFA will continue to communicate with the players to ensure that they are as comfortable as possible until their return and thanks the Unicomer Group and the El Salvador Football Federation for their continued support.”

Williams represents AD Isidro Metapán and lives in Santa Ana in west El Salvador while Jack’s employers, Jocoro FC, are based in the north eastern side of the country and Francois plays for Independiente FC in central El Salvador.

“Mr Hadad, a heartfelt thanks to you and your team for reaching out to us,” stated Jack, in the TTFA release. “We really appreciate what you did for us. I am sincerely grateful for the assistance.”

But what exactly did Hadad do? Wired868 asked the normalisation committee chairman for more details.

“The normalisation committee reached out to the El Salvador Football Federation to see what assistance could be made,” said Hadad, via a WhatsApp message. “And then Unicomer reached out and came on board to help and we all continued to work together with the players to get them into a more comfortable situation as quickly as possible.”

And what was the assistance?

Hadad did not give further details. However, one of the three players explained that Unicomer (Trinidad) reached out to an employee based in El Salvador, Meybely Lopez, who arranged to have Francois and Jack driven to Williams’ apartment in Santa Ana.

It was a four hour drive and the players are very grateful for the support. The curfew regulations in place in El Salvador meant that Francois and Jack were unable to even travel across the country.

There was no other relief provided to the players and none sought. Williams’ apartment is leased by his club and they are not about to turn him out. The Trinidadians believe they are well stocked with food for the moment.

Still, they are anxious to return home while Williams is nervous that his passport expires on 2 June.

At just after midday on Friday, Wallace emailed Young in his capacity as Minister of National Security:

“Good afternoon Mr Minister, I hope all is well. I know that you are well aware with what is happening with the TTFA and the FIFA and the status of the elected officers. I am reaching out to you from as the elected president of the TTFA as well as on a humanitarian grounds to facilitating the return of three of our national players who are stuck in El Salvador and are pleading to return home.

“Could you please consider this request since these players went to ply their trade with the full blessings of the TTFA. Regards.”

At the time of Wallace’s email, the three footballers were still scattered across El Salvador. It is uncertain whether concrete plans were already in place to have them united.

Young, according to Wallace, did not respond to his communique. The TTFA president counted at least three emails sent to the national security minister since Fifa controversially sought to replace him with Hadad at the helm of the local football body. Young, who recognises Hadad as the de facto TTFA boss, has not responded to a single one.

Sancho, a former World Cup 2006 player, has also publicly thrown his support behind the normalisation committee.

The three players will accept help from wherever they can get it. Griffith sought to assure Williams that an expired passport is not catastrophic, as the Ministry of National Security can arrange an emergency order paper to get him home.

At present, the main issue is logistics. There are no direct flights from El Salvador to Trinidad. So, if the boys are to return on a commercial flight, they must first travel to another Central American country—in the midst of a global pandemic.

“I am trying to see how I can get them out of El Salvador,” Griffith told Wired868. “[This situation] was forwarded to the relevant authorities and I am liaising with Brent Sancho on it. There is no flight from there for Trinidad and we can’t charter a flight for just three persons. But we are working on a solution.

“Hopefully we will have them out of there long before his passport expires.”