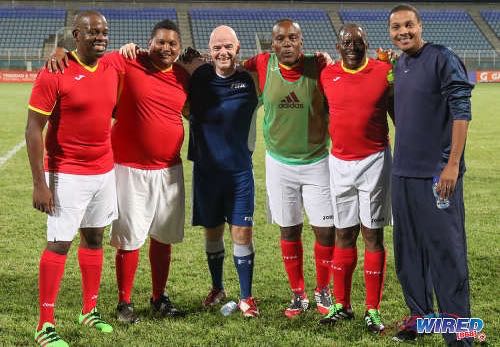 In a statement issued by the world governing body and signed by Infantino on Wednesday, the FIFA boss was moved to sadness on Joseph’s sudden passing on Monday.

The 80-year-old succumbed to health challenges, on Monday, at the Port of Spain General Hospital, where he had been warded for the past few days.

“On behalf of the international football community, I wish to extend our deepest sympathy to the TT Football Association, and to Sedley’s family, friends and loved ones. Our thoughts are with all of you. We hope that these memories and our words of support may help bring some peace and solace in this difficult time,” the statement read.

During his career, Joseph captained the national team from 1964 to 1968, including for the country’s first-ever FIFA World Cup qualifier match in February 1965 against Suriname, as well as on the occasion of the Pan American Games in Canada in 1967, winning the bronze medal.

At club level, he will be remembered for his career at Maple club, where he led the team to numerous trophies over the years.

Considered as one of the country’s iconic players, Footballer of the Year in 1967, inducted in the Hall of Fame for sport in 1987, holder of the Hummingbird Medal Gold in 2005, and awarded with the FIFA Centennial Order of Merit in 2004, Joseph’s legacy and achievements, and in particular his personality, his skills and his leadership will not be forgotten.

In a release issued on Monday, Browne said, “Sedley was an outstanding leader who discharged his responsibilities as captain diligently, with discipline and always extended an encouraging word to his team-mates to get the best out of them.”

Joseph was the former captain of the outstanding Maple Sports Club of the Port of Spain Football League that won the division in from 1960-63. He followed in the footsteps of his elder brother, Allan, who as captain, also led the club to the league victory in 1950-53.

As national team captain, Browne was also integral in T&T’s defeat of Argentina at the Pan American Games 1967, held in Canada.

He was also a T&T customs officer for several decades and after retirement served as a sports broadcaster for the Rediffusion Group. In 2001, Joseph led the large regional sports broadcast team CSTN to Zimbabwe for two months for the first West Indies cricket tour to Zimbabwe in a triangular series that included India.

“Sedley Joseph served as a member of the TT Sports Foundation for several years and his contribution to sport in T&T demonstrated commitment at all times to club, league and nation with steadfast, dedication, integrity and selflessness, always demonstrating his vested faith and devotion to God. As we bid farewell, we all joined in the prayer that Sedley’s soul would find warmth in the arms of God with eternal Rest in Peace,” the release stated.