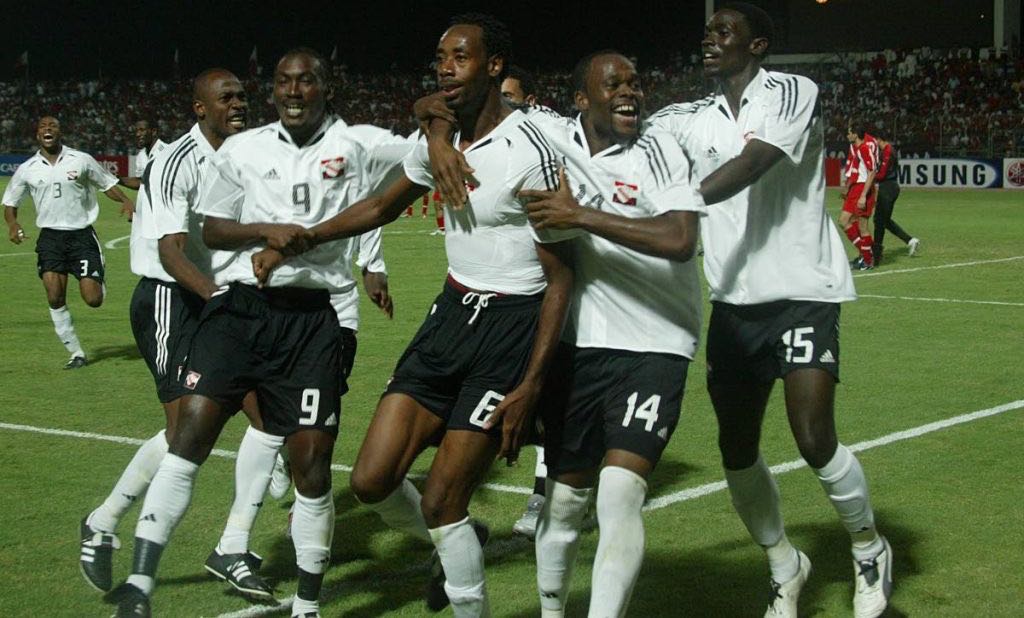 THE DATE November 16, 2005 will live long in the memories of local football fans, as T&T defeated Bahrain 1-0 (for a 2-1 aggregate win in their FIFA World Cup Final Round playoff tie) to book a spot in the 2006 FIFA World Cup in Germany.

In the 49th minute, at the National Stadium, Manama, Bahrain, T&T defender Dennis “Tallest” Lawrence met a corner from captain Dwight Yorke with a header, past goalkeeper Hussein Ali Hassan, to give T&T the win which guaranteed them a ticket to Germany.

At that time, T&T, coached by Leo Beenhakker, were the smallest nation, in terms of population, to qualify for the World Cup.

On Monday, Gray and Bruce Aanensen, one of the three team managers, reflected on the historic day for the “Soca Warriors”.

JOEL BAILEY (JB): T&T drew with Bahrain 1-1 on November 12 at the Hasely Crawford Stadium, and needed a win in the return leg to qualify for Germany. How was the feeling like, between both legs (November 12 and 16)?

BRUCE AANENSEN (BA): From the time that game ended, I reflected on how things went and especially the goal that Chris scored (in the first leg) to equalise. I told people in the stands ‘I don’t know what you all are worrying about, we’re beating this side in Bahrain.’ It just came to me very clear that we are going to win. I had no concerns, there was nothing to worry about, we would win the game in Bahrain and go through (to Germany).

JB: Going to the stadium, with a pro-Bahrain crowd, were there any nervousness within the camp or were there just quiet confidence that the mission would be accomplished?

CG: We (were) quite relaxed. From the training sessions, you could see the confidence. We had the belief that we could have won the game.

BA: The only concerns the players had was when the coach decided to leave out Russell (until midway in the second half). He was very specific, and he said when Russell runs at those fellas early, when they have fresh legs, they could hold him off. However, if he brought (Russell) on and he needs a goal, then he was quite clear in his mind that Russell could produce the magic against tired defenders. The guys were quite surprised when (Leo) called the team and left Russell out but those of us inside know what was happening. Russell was very happy with it, he thought it was a brilliant strategic move by the coach.

JB: Early in the second half, the moment the team and T&T were waiting for, the crucial away goal, which was scored by Lawrence. How did you feel upon seeing the ball enter the back of the net?

CG: It was a joy to see that ball went in, and after that, we were just (saying) ‘let us see the game out and make sure no goal score against us, continue playing positive football’.

BA: I wasn’t surprised because I knew we were going to win. I don’t know if it was a premonition or what.

JB: After the final whistle (from Colombian referee Julian Oscar Ruiz Acosta) and qualification was assured, how did you feel?

CG: That was a surreal moment, it’s a moment that you live your whole life for as a footballer. When that final whistle went, it was just a relief that finally you get to the World Cup, after how many tries. It’s an experience that is hard to explain, it was out of this world.

BA: When the final whistle blew, all I remembered was running and telling Leo to get all the players in the middle of the field because (some fans) were throwing seats. Fortunately, there was an athletic track around the field so the seats couldn’t reach the field. But we didn’t know if there were any projectiles that could reach. The frightening thing was the Bahrain security went to protect the Bahrain team from the supporters, none of them came to protect us. We just huddled in the middle of the field where we felt safe. In everything, there is a group of people who don’t know how to lose gracefully.

JB: Fifteen years later, T&T football is in the news for the wrong reasons, as well as severely affected by the financial problems caused by covid19. Do you expect to see T&T, sooner rather than later, become a force within the CONCACAF region?

CG: I just hope that whoever is in charge, go there to do the right thing, not for financial reasons, but to see football grow and benefit the people of T&T. Let it be for the good reasons, not for the bad reasons.

BA: That’s all we can hope for. All the structures have been broken down.

Rebuilding is not going to be easy and I feel for the young players who want to make a career as national players. It’s going to be a long way to go. I don’t see us recovering (until) the next five to ten years. The covid doesn’t help it, the whole state of the economy doesn’t help it. It’s a difficult road back. I can only hope before I leave this world that I would see a resurgence.