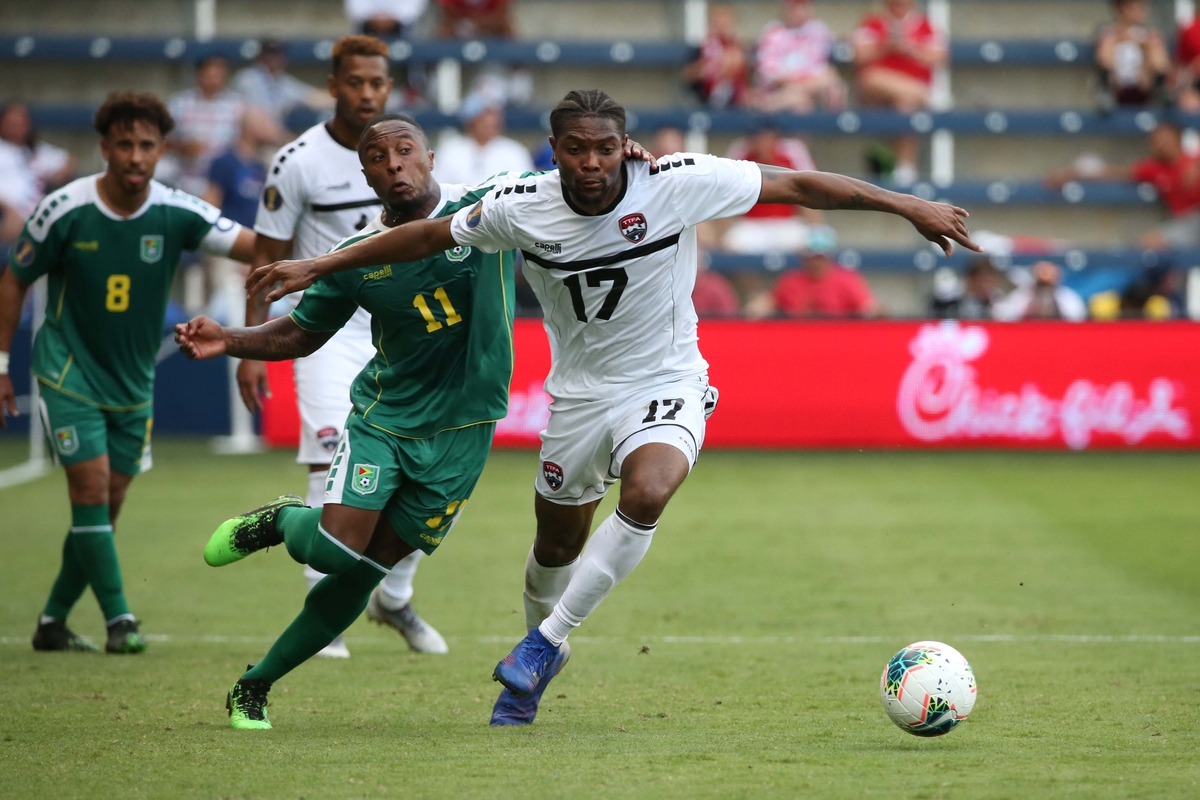 A popular narrative surrounding the World Cup qualification match between Trinidad and Tobago and Guyana, to be played in the Dominican Republic this evening, is that of a mounting football rivalry between both nations. Before the narrative assumes mythical or legendary proportion, or gains cultural traction, domestic fans of the game ought to take a step back to reflect on the actual dimension of the competitive equation between both countries. Of 51 matches documented since 1923, the Trinbagonian cohort has lost a mere 15 per cent of the contests. Drawn affairs account for roughly 27 per cent of the total. A preponderance of the battles and victories has been celebrated in Port-of-Spain.

Having in 2006 conquered the quest of participating in a World Cup, the anticipation in Trinidad and Tobago was that there would have been a consolidation of footballing processes within the country and that its implementation would establish (1) a narrowing of distance between the Trinbagonian football product and the elite nations it idolizes and seeks to emulate and (2) an extension of the distance between Trinidad and Tobago and its Caribbean neighbors. This conception of the future also endorsed a rivalry that was exclusively binary and that solely pertained to a northern Caribbean nation famed for producing sprint stars and the music of Marley. Although the anticipation of repeated success should have been tempered by the experiences of that northern neighbor in various qualification cycles after 1998, and by the cautionary tales of other debutants, the anticipation of attaining repeated success was not entirely unreasonable or misplaced, particularly factoring-in that the 2006 World Cup should have marked the third occasion on which a senior team from the Land of the Hummingbird graced the world stage.

Despite the various maladies that have occupied Trinidad and Tobago’s national football, in the post-Germany period, the record of the Soca Warriors against Guyana, in 10 outings, manifests five wins, four draws and one loss. Attentive fans will recall that some of the matches in the middle category were influenced by imposed caution rather than expansive displays. Nevertheless, a record in which 90 per cent of the matches are not characterized by defeat is far from akin to the nominal or Pyrrhic victory with which Prime Minister Rowley branded United TTFA’s tour through the judicial system. While it is undeniable that Guyana’s lens of the competitive relation informs the Golden Jaguars that they have been undefeated on half of the match days post-2006, pretensions of a genuine rivalry actually emerged from a singular moment almost a decade ago. The inflexion point in perception of the competitive relationship was triggered by Guyana’s 2-1 defeat of the Soca Warriors in November 2011. That loss dented pride, smashed notions of progress, and begged for a sense of national team program redirection. Prior to it, the previous loss by a Trinidad and Tobago senior national team at the feet or head of Guyana took place in September 1977.

On the occasion of the 2011 victory, then Guyana national team coach, Jamal Shabazz trumpeted the significance of a Caribbean national team coach, who was indigenous to the Caribbean region, triumphing over a coach steeped in European preparation, African trophies and global recognition. Never one to falter in identifying where to insert momentous pronouncements, Shabazz acclaimed the victory as catharsis and reward for the unheralded labors of various Caribbean assistant coaches who had silently absorbed knowledge from the many foreign coaches who perennially graced the regional football landscape and then emerged to conquer their tutors. His comments were insightful, intended as visionary, albeit not broadly digested.  How much progress has taken place since then?

A decade later, entering the match tonight, Guyana is buoyed by a non-Caribbean coach, with roots in neighboring Brazil, who has amassed an itinerary of coaching experiences in diverse locations and, conversely, Trinidad and Tobago is coached by an Englishman with substantial tenure in the twin-island republic and a curriculum vitae that essentially renders him a local coach, although he also bears a dabbling of extra-regional experience and an elite playing pedigree.  In actuality, the sea change announced by Shabazz is only today taking root as Trinbagonian coaches position themselves at the helm of regional national teams. The cross-pollination of coaching nationalities within the Caribbean region remains constrained. On the other hand, the infusion of foreign coaches into the region has diversified in terms of country of origin. Notably, current Dominican Republic national team coach Jacques Passy, a former coach of St. Kitts Nevis, recently heartily expounded on Mexican television about the virtues of the professional rewards and abundant horizons of coaching a Caribbean team. Others have inquired. In this sense, where Guyana and Shabazz in 2011 located space to derail Trinidad and Tobago’s ambitions, the space of operation for Caribbean coaches is susceptible to being more restricted if the region cements a trend as a location hospitable to cultivating a coaching reputation. Also, although an aberration, the presence of Guus Hiddink at the other end of the scale tightens the arguments and the expectations. Nonetheless, it is not a bad thing for coaches indigenous to the Caribbean to be compelled to do more to stamp their authority on, and place in, the international game. Consequently, it is against this backdrop, and various postured and wily pronouncements by Shabazz, that a contemporary sense of a Guyana-Trinidad and Tobago rivalry has seeped into the national footballing consciousness.

During the immediate period in which followers of the Trinidad and Tobago national team hoped that travel arrangements to Germany would be supplemented with reservations for South Africa, Guyana national team coach Marcio Maximo was plying his craft in Tanzania. This period of his coaching experience is markedly interesting because it presents insights into his conception of football and because it occurred after having made an abbreviated entry into Scottish football as a Brazilian pioneer. In Tanzania he expressed foundational elements of the overarching signaling that he has alluded to regarding the football he wants to deliver to Guyana. He is a coach of clear ideas regarding methodological preparation and concerning the continuum of development on which junior players should be transitioned into the senior national team. Maximo was a realist in contextualizing Tanzania’s development challenges vis-à-vis its competitor neighbors and also pragmatic in formulating the placement of secondary school competition and programs within a development structure designed to bolster future national team prospects. For Trinbagonians this may be a surprising and curious perspective for a foreign national team coach to advocate, because Trinidad and Tobago is more accustomed to national coaches from abroad being critical of the SSFL’s infrastructure.

Maximo has brought aspects of this discernment and cultural meshing to his responsibilities in Guyana. In a manner, it is what has prompted a critic to ponder whether he has trampled on the margins of false prophecy. One of Maximo’s strengths has been mastering intercultural hurdles and cross-cultural challenges while tying domestic football priorities to practical objectives that do not compromise professional coaching practices.  However, as Maximo has grown in the coaching profession, so too has his commitment to convictions and decisions. As such, although his exclusion of a sentimental national team favorite from the Golden Jaguars squad has irritated segments of the Guyanese population, Maximo is not in the least perturbed by the decision because he is absolutely certain of the type of football he proposes.

This evening in San Cristobal, Guyana has a game plan that is inversely related to the number of preparation matches it has accumulated, but it is a proposal that is grounded in the mental processes of its perceptive coach. In addition, the good news for the Guyanese-Brazilian alliance is that Trinidad and Tobago’s match preparation has not placed the Golden Jaguars at a tangible disadvantage. However, Trinbagonian fans are hopeful of a Soca Warrior match plan that is coherent, anticipatory and flexible. Most of all, under circumstances in which the race to three points is significant, astute fans of the Soca Warriors wish to see an expression of playing identity, ambition and conviction that is a strict departure from its most recent rendition.

In the post-2006 era there are certain tactical proclivities that have plagued the Trinidad and Tobago national team, despite the identity of the coach at the helm of the squad. Without argument, some coaches have been better at managing the habitual tendencies than have others. Not one has been able to manage them without occasional vacillations in performance. One or two of them have been unable to either comprehensively identify the issues, treat with them sufficiently, or to suppress the negative tactical proclivities at pivotal moments. Fundamentally, it is these details that Guyana seeks to exploit in the Dominican Republic tonight on a calculus based on two tenets. The first tenet is that a phenomenon repeated often enough constitutes a pattern and the second tenet is that resumption and resurgence of a pattern is aided by periods of collective inactivity and a lack of opportunity for negative reinforcement. The competitive inactivity of the Trinidad and Tobago national team is well-documented and even in the pre-COVID 19 period, there was an insufficiency of national team football during the international calendar.

Maximo and Guyana will be insistent in seeking to play the ball in between Trinidad and Tobago’s lines, thereby nullifying a cadre of players relevant to impeding its forward actions. They will attempt to play to advanced positions with minimal delay or distraction while being economical with lateral movements of the ball. Although Guyana will not be a direct team, on selected indications direct probing balls will be issued. Midfield contention is expected to be an initial and persistent inquirer of Trinidad and Tobago’s resistance. As such, in compact spaces in the Guyanese half, and in explorable spaces in the Trinbagonian half of the field, Maximo’s Guyana will be exploring what movements attract and preoccupy the Soca Warriors’ central defenders. Despite the foregoing, there is a concrete opportunity tonight for the Soca Warriors to emphatically dismiss Guyana’s ambitions. Not only does the weight of the record lean to Port of Spain, but despite the fundamentals of the Jaguars’ intentions, Guyana must be mindful of Trinidad and Tobago’s prowess on the flanks. The center of the park will reveal Trinidad and Tobago’s truths and the flanks will negate the advantages. Any sense of rivalry will reside in the parity of the battle posed by what is anticipated to be differing approaches to solving a puzzle.