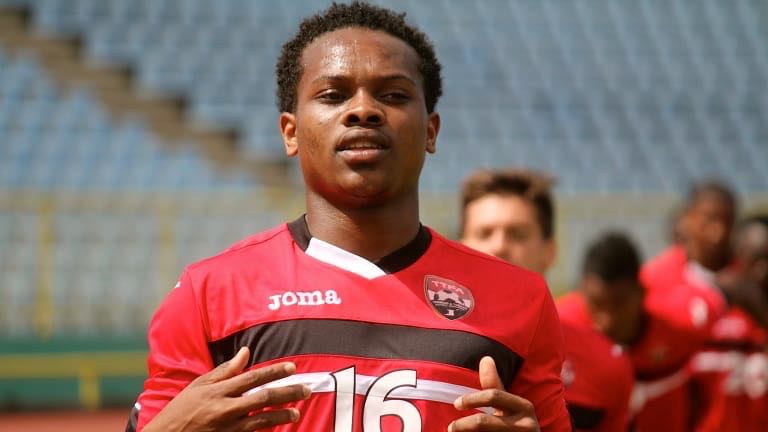 European-based T&T senior men’s football team winger, Levi Garcia said there is nothing more positive than the 3-0 win over Guyana in their 2022 Concacaf World Cup Qualifiers on Thursday night.

Playing at the Pan American Stadium, San Cristobal,  Dominican Republic, the 23-year-old Garcia scored for only the second match in 28 matches in national senior team colours to open the scoring against the Guyanese “Golden Jaguars” with a lovely individual goal, squeezing past the defenders and the end line and then firing home in the seventh minute.

It was his first goal since a double on debut against St Vincent and The Grenadines on March 25, 2016, exactly five years ago to the date, in a 3-2 win also in World Cup qualification.

A free-kick from Ryan Telfer deflected off centre-back Sheldon Bateau’s thigh and into the goal in the 15th minute to extend the Soca Warriors lead.

Joevin Jones then failed to extend the lead from the penalty spot and was twice denied on the rebound as well before an alert Telfer pounced on an error from Guyana goalkeeper Akel Clarke in the 44th minute, with the goalkeeper fumbling an attempt to collect and Telfer able to finish into the open net.

Speaking to T&T Football Association (TTFA) Media after the match, Garcia, who has netted four goals for AEK Athens in the Greek League this season, since his move from Israel’s Beitar Jerusalem at the start of the year, said he was pleased with the result.

“I’m happy for the team, the fans back home and as I said before we wanted a positive start and there is nothing more positive than this result.

“I’m also really happy to get a goal and there is nothing bad about that as well.

He added, “Personally, coming from such a long flight to get to the Dominican Republic was pretty difficult, to begin with, but hopefully I will be able to fully recover for the next game, but otherwise I’m grateful for the score today (Thursday).

Concerning the administrative problems which have been plaguing local football for the past 12 months, which resulted in a Normalisation Committee being installed, Garcia who also played in Holland with AZ Alkmaar, Jong AZ and Excelsior said, “We are all professionals and with all the negative around, we tried our best to be positive.

“It was a difficult task at hand but we took it as men and we went out and executed.

Asked how pleased he was about his performance, the nippy left-footed Garcia added, “I feel good about myself as my game is to take on players and I’m really happy I was able to do it.

Despite it being the team’s first match in the campaign and only the second with coach Terry Fenwick, Garcia said the team gelled well.

“Overall, as a team the communication among the guys was great, we had a plan and it was well executed I think.

“Everyone was together, we stayed focus and did our jobs.

Looking ahead to Sunday’s second match against Puerto Rico, who was edged out 1-0 by St Kitts and Nevis in their opener on Wednesday also in the Dominican Republic, Garcia said he was hoping for more of the same.

“We got the positive start and hopefully we can continue like this, stay focus and stay as professionals and do our jobs."

Watch Garcia: We want to keep the momentum.

Fenwick pleased with result, wants public to get behind players
By Nigel Simon (T&T Guardian).

AEK Athens winger Levi Garcia opened the scoring for T&T, in the seventh minute before defender Sheldon Bateau guided in a Ryan Telfer free-kick into the far corner with his thigh while the latter added the third after some sloppy goalkeeping from Guyana’s Akel Clarke in the 44th minute for a 3-0 half-time lead.

It could have been worse for Guyana, but T&T’s Joevin Jones had his penalty attempt twice blocked by goalkeeper Clarke, with his second rebound attempt being deflected away as well.

Speaking after the match, the under-fire Fenwick who made his debut in charge of the national team in a 7-0 thrashing from USA last month, said: “Obviously, I am very pleased with the result. These are my players that want to make T&T football and the football fans back in T&T proud again about our performances and I can’t say anything too hard about them.

“The performance was great, but I’m really upset that we missed a penalty and the fashion that we did miss and the rebound, but the general performance was excellent, well structured and very professional, but again one step at a time.

“We got another game coming up in three days (Sunday) and I’m pleased with my team and I am hoping that the public at large back in T&T will get behind our players and back us.

“We had to keep our composure as you know we are working with the very high press which we have done in T&T over the last 12 months.

“From that high press at 100 mph, we've got to slow it down and be composed on the ball.

“And I thought our pressing and movement was excellent and when we were direct, we were very direct and got our goals. Our set play worked very well with the in-swinging free-kick, so obviously I’m pleased but this is just the first of hopefully many, so it’s one step at a time and I want the public to get behind us.”

Looking ahead to Sunday’s second match in the five-team round-robin Group F series against Puerto Rico (beaten 1-0 by St Kitts and Nevis on Wednesday) in San Juan, Fenwick said he and his team have been able to get some scouting done on the Puerto Ricans, thanks to the help of the Normalisation Committee and will be viewing the footage to prepare for them properly.