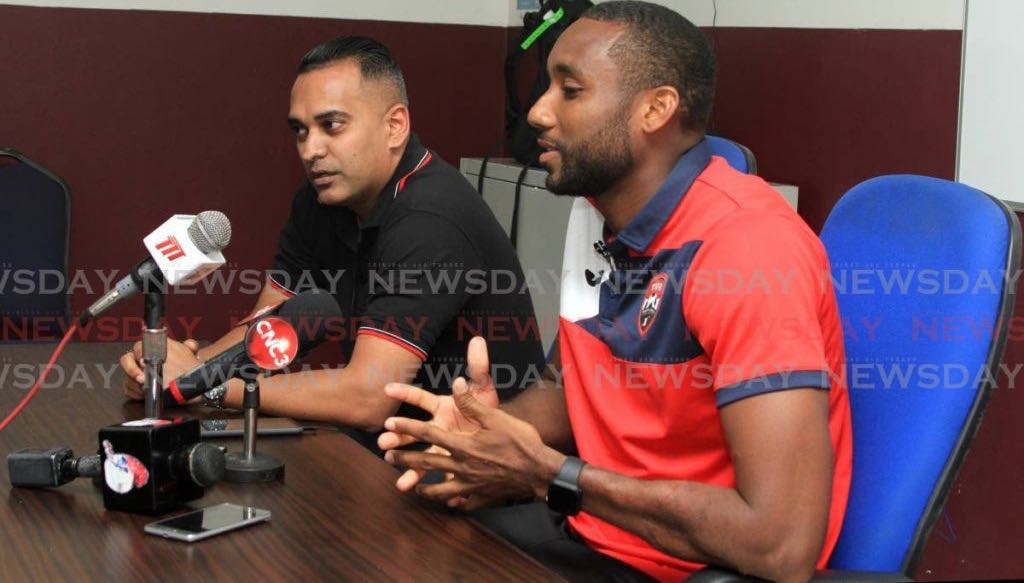 T&T goalkeeper Adrian Foncette is warning that his team must not take the Bahamas for granted, as they go after six points from two matches over the coming week and a half in the FIFA/CONCACAF World Cup Qualifiers.

The Bahamians are winless after two matches against St Kitts and Nevis and Guyana and will be hoping to break their losing trend against T&T on Saturday from 5 pm at home. The Soca Warriors, on the otherhand, cannot afford to drop any points if they are to finish at the top of Group F and advance as the only team.

Coach Terry Fenwick's men dropped two vital points against Puerto Rico on March 28, three days after they opened their campaign with an impressive 3-0 win over Guyana in the Dominican Republic.

Foncette, following a training session on Sunday said a victory against the Bahamians will help build their momentum going into the all-important match against St Kitts and Nevis on June 8.

With two wins in as many matches, the St Kitts and Nevis men are in the pole position and could need as simple as a draw against T&T, if they beat Guyana on Saturday as well.

"This game is one not to be taken for granted at all. It will be important for us, building our momentum going forward. So this is a crucial three points we need here. We need to minimise our mistakes including build from strength to strength, game to game, taking it from this one here and on to the others," said Foncette, a police constable.

The 32-year-old comes in for Marvin Phillips and Nicklas Frenderup, who are both unavailable for various reasons, said, is one of three players to have fallen ill. According to Foncette, who has 17 caps, he has been in that position before so he is not concerned.

The T&T team arrived in Nassau, Bahamas on Friday and has been accepting the overseas-based stars over the past few days. So far Foncette said things have been good in the camp and everyone is positive.

"It's good to see some of the guys coming back in after the little break that we had between the last set of matches, so we're just looking forward to the games at hand."

TRINIDAD AND TOBAGO goalkeeper Adrian Foncette said the entire squad must be ready for the challenge ahead as the players gear up for 2022 FIFA World Cup qualifiers, Concacaf Gold Cup qualifiers and potentially the Gold Cup in the next two months.

Following matches against the Bahamas in Bahamas on Saturday and versus St Kitts and Nevis in the Dominican Republic on June 8, T&T will travel to Ft Lauderdale, Florida to compete in the 2021 Concacaf Gold Cup qualification tournament from July 2-6.

T&T will aim for a top-three finish in the qualification tournament to qualify for the Concacaf Gold Cup from July 10-August 1 in the USA.

T&T are second in Group F in the Concacaf zone of the World Cup qualifiers with four points after one win and one draw. T&T defeated Guyana 3-0 in their opening match on March 25, before being held to a 1-1 draw by Puerto Rico on March 28.

St Kitts lead Group F with six points. Only the top team will advance to the next round of World Cup qualifying.

Discussing the possibility of being on the road for the next two months, Foncette told TT Football Association media, “It is something that all our players need to be ready mentally and physically (for). We are not here on a vacation, we here for business. Going forward we just need to stay focused. We need to do what is required and everybody needs to do their part.”

Foncette said the short training camp leading up to the Bahamas encounter will be pivotal to the team’s preparation ahead of the two World Cup qualifiers.

“Is one (camp) that we really needed. We needed it for some time. We needed to be away from the general public and just be in a bubble, so that we could put our heads down and just get the work done.”

Foncette is expected to be the starting goalkeeper as Marvin Phillip in injured.

Foncette said, “Is unfortunate what happened to Marvin. I wish him a speedy recovery, but these things happen and whenever I am called upon to play I am always ready. I’ve been here before (and) it is always an honour to represent the country, it is just something to look forward to. It is nothing over the top. This is what we train for - to play.”

Bahamas are rooted at the bottom of the group, but Foncette said there is no room for complacency.

“To be fair this game is one not to be taken for granted at all. Is one that I think it will be important for us building our momentum going forward. These are crucial three points that we need here. We need to minimise on our mistakes (and) just build from strength to strength, game to game taking it from this one here to the next one and on to the others."